Towards the end of winter term, my friend Connor went home for a few days and invited me along. The result was five days of pleasant exploring and an intensive course in set-building.

Connor lives in Ashtabula, a small town in northern Ohio, right on Lake Erie. It is a beautiful place. I was lucky enough to get a glimpse of a special phenomenon that made it even more impressive. We went down to the beach one day, intending to take a walk, and found everything--trees, grass, even rocks--encased in a thick layer of ice. It was breathtaking. I came back with my camera the next day to take pictures. The temperature had gone up by then and some of the ice had melted, so when you look at these, remember that it was even more impressive the day before. 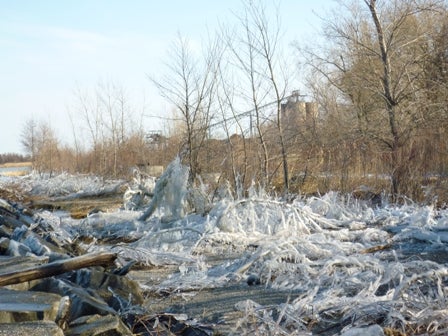 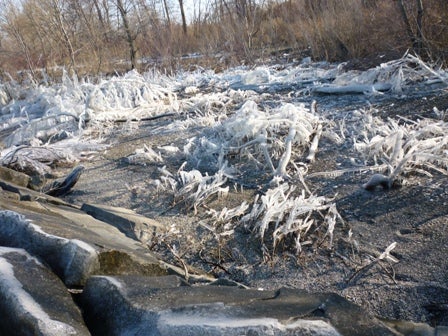 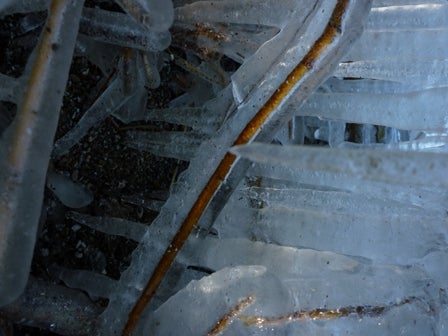 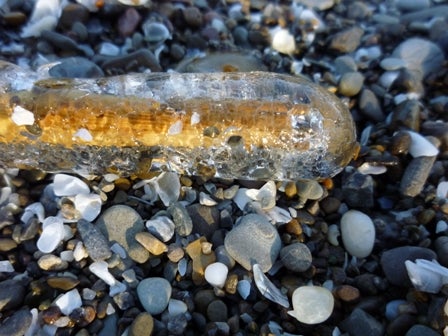 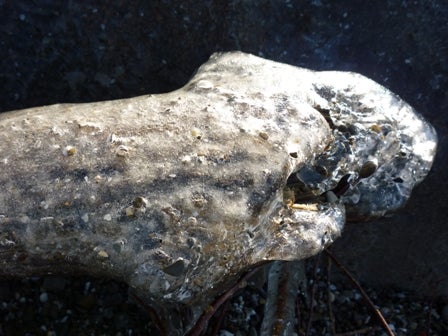 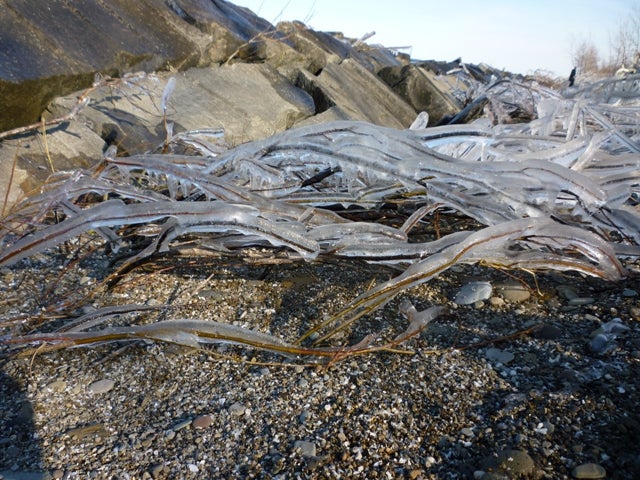 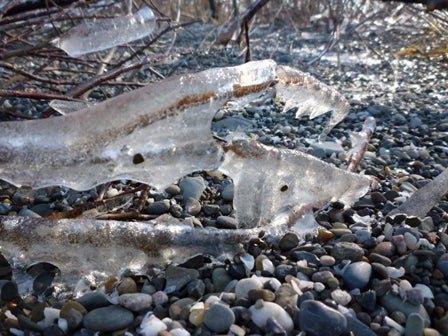 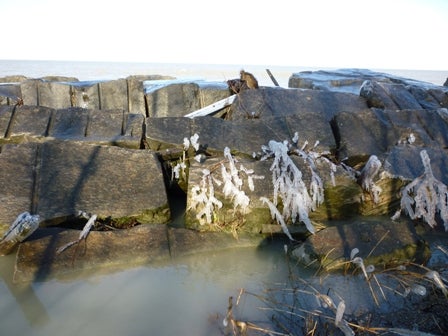 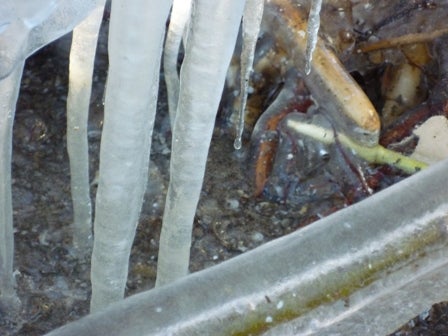 I've seen pictures similar to this taken after ice storms, but that wasn't the case here. Furthermore, this doesn't happen all the time; Connor thinks it's because this winter is unusually warm. The lake usually freezes over, especially this close to the shore. This year, it hasn't, but it's still cold enough to freeze anything that isn't in a large body of water. Small droplets or thin layers freeze almost instantly. That means spray thrown up by waves hitting the breakwater freezes on whatever it happens to hit. The result is this ice layer. 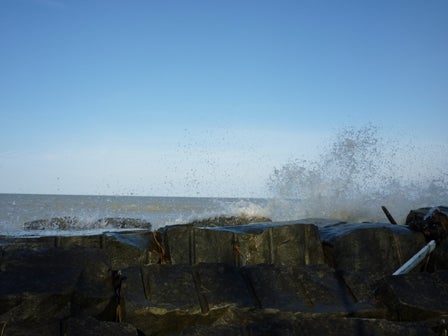 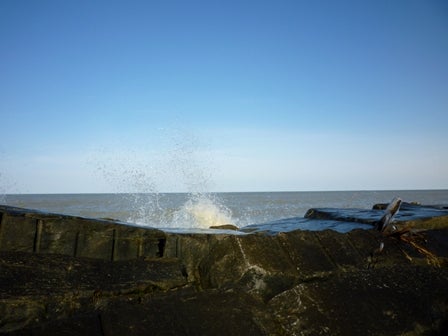 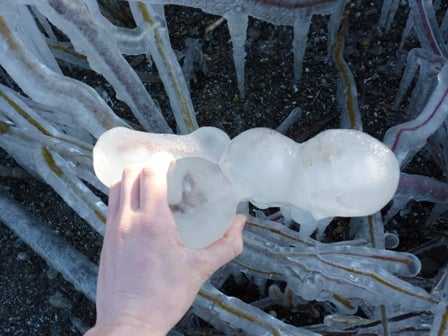 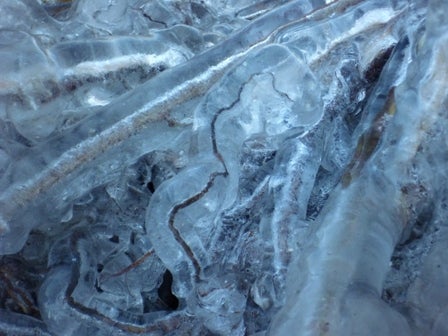 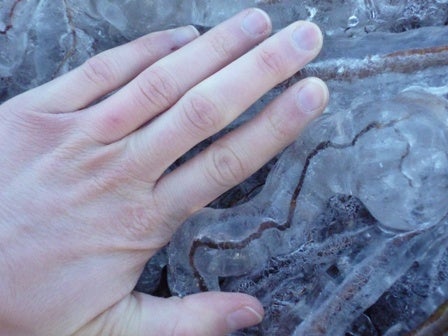 The same tendril shown above, with my hand next to it for scale.

One tree was covered in icicles that had dripped, re-frozen, grown, and fused together to such an extent that it looked like a giant dripping wax candle. 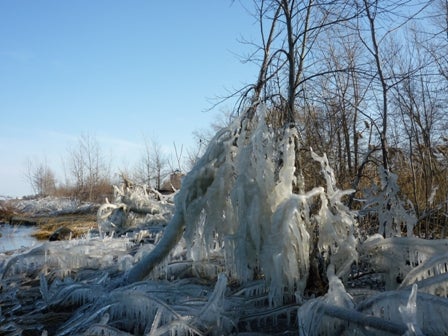 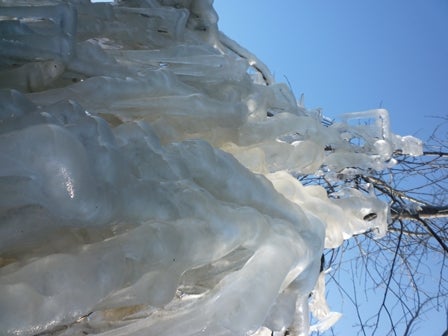 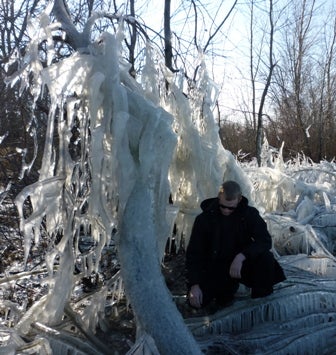 This time it was necessary to put Connor in to show the scale.

I keep forgetting--though any fool can tell just by looking at a map--that the Great Lakes are actually much bigger than Puget Sound. I also instinctively look for islands and mountains in the middle distance whenever I'm confronted with a large watery vista. Lake Erie reminds me much more of the ocean. It's huge and cold, with seagulls flying overhead, and it doused me with spray. Only the absence of the salt smell grounded me in the reality that this enormous body of water was, in fact, a lake. 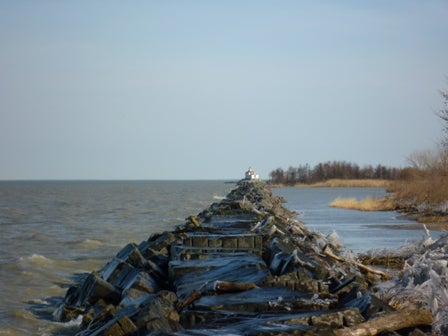 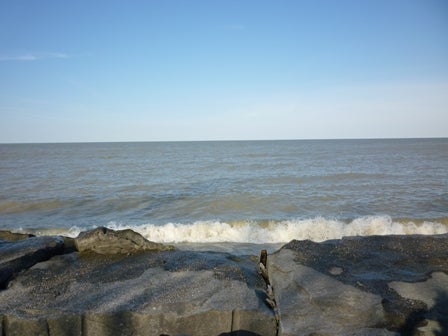 But that wasn't the only natural beauty I found there. Connor and his family live in an eco-house built into a hill. (It may not come as a surprise that Connor's mom is an Obie too.) It's insulated by the earth, making it cool in summer and warm in winter, with additional heating provided by a woodstove. Because of its built-into-the-hill-ness, Connor once described the house as being "upside down:" the front door is on the top floor, the kitchen and living room in the middle, and the bedrooms in the basement. It's really neat.

The most impressive thing about the house, though, was where it was. Their driveway is about a third of a mile long, setting the house far back from the road and other houses. On the other side of the house are the woods. I don't know how far they go--Connor took me on a walk through some of it, but there's much more out there. He grew up scrambling around through the trees, in the river, and up and down the edges of the ravine. I am now much less surprised at his tree-climbing ability, which is impressive even by Oberlin standards. 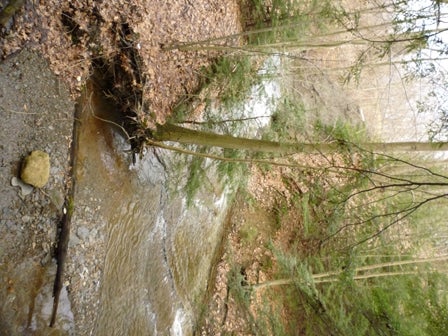 The woods have grown up around a twisting ravine with a stream flowing along the bottom. The result is something like the enormous forest familiar to readers of Calvin and Hobbes: exciting, quiet, beautiful, and brambly. 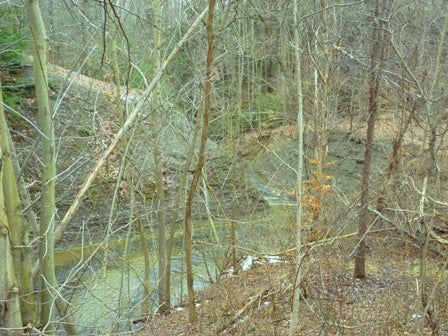 This last adjective makes Connor the only person I know who finds it necessary to take a machete along when going into the backyard. 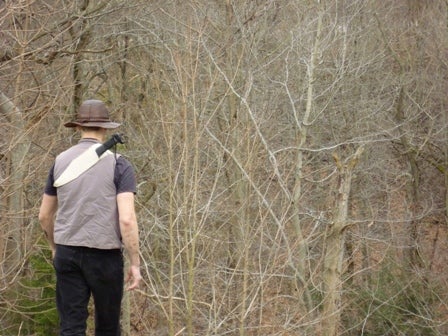 We didn't just romp around outside when I was there, of course. There was a lot of interesting discussion. One morning Connor's dad, who tracks these things, woke me up a little before seven to go outside and watch the International Space Station fly overhead. It moves extremely quickly and is very bright indeed. Another time, I got to see Keelie, the dog, intercept and destroy a snowball. I was thrilled when I found out that they make jam out of elderberries that grow somewhere in the woods. It's incredibly sweet stuff, wonderful on pancakes. I liked it so much that Connor's mom pressed a jar of it on me when I left. 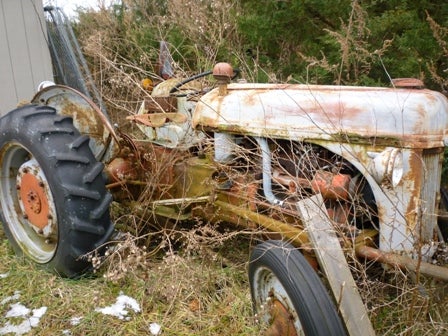 Connor's whole family was wonderful and very talented. His dad is an artist, and his brother seems to be going that direction as well. His grandma quilts--beautiful blankets, wall hangings incorporating objects found on the beach, and whimsical jackets. His mom works at the community arts center as "Visual Arts Coordinator," which seems to mean everything from organizing exhibits to teaching after-school programs. Since she works there, Connor basically grew up at the arts center: everybody knows him. I spent a good deal of time there as well. We all saw a play there the first night of my visit, and over the next few days, I ended up getting a crash course in stagecraft there.

Part of Connor's arts-center upbringing has involved helping to construct (and de-construct) sets. Now, whenever he's home, if a show has just ended, his mom lets him know and he goes over to help Phil, the technical director. This time she had two twenty-year-olds to volunteer. I've always wanted to do something with stagecraft, but never had the time, so I was eager to help out. They were happy to put me to work. I carried trees and tables out to a storage shed, undid screws, and ran around getting hinges and brackets where they needed to be. I was surprised how quickly the set transformed. By the end of the first day, a forest had been turned into the bare outline of a hotel. By the end of the second day, the hotel set boasted no fewer than five doors, a working doorbell, and a ringing phone. (The upcoming play, unsurprisingly, was a farce.) On the third day, we painted everything, and the last remnants of the forest disappeared behind a double coat of white paint. We also hauled some old set pieces out of storage, including an ancient stereo the size of a dresser that at one time held a radio and a record player. Unfortunately, I forgot to take photos until this last day, so you can't really get a feel for the transformation. 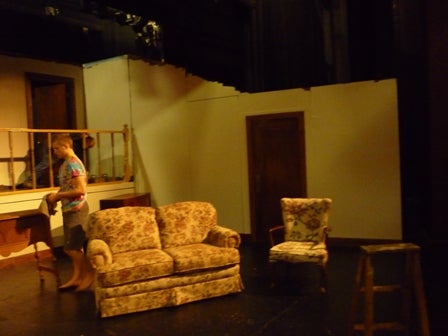 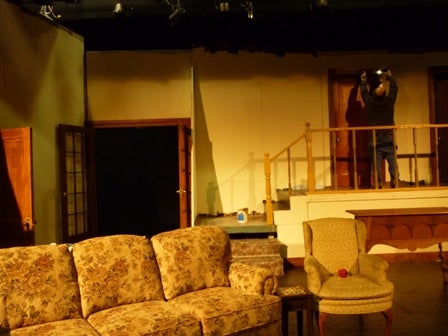 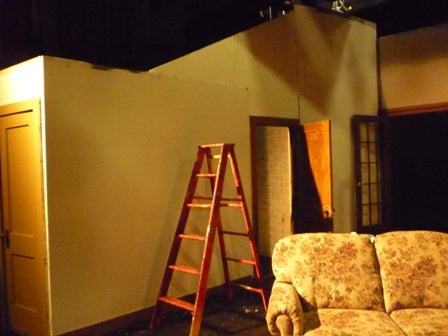 It seemed like everyone we ran into came up and said hi to Connor. For someone so introverted, he seems to be very well-known. He claims it's a result of living in a small town, and particularly of being around the center all the time. This is probably true, but it still amused me. 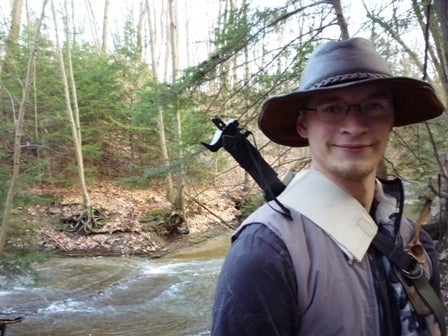 Thanks for saying such nice things about your visit with us. We don't seem crazy at all. You are welcome back any time.

Thank you! You're not crazy at all--just lots of fun.

That is officially the coolest lake EVER. I would love to see that in person.

Stopping for a brief moment, providing yourself options, different directions to go in.

Being in my slump (and ultimately getting out of it) helped me find my way back to my core beliefs.