One of the things I appreciate most about the Admissions Office is how much of a team we are. During the winter when we're busy reading applications, we keep each other company by holding reading parties, going to the gym together, and making sure we're all eating real food (y'all, I can make a feast out of tea and peanuts if pushed to it). Last summer, we watched World Cup matches together in the office, at Slow Train, or at Jill's house. Josh taught me how to shovel a driveway (thanks, I guess?). Kris got me on a bicycle last year and taught me how to turn left. We have board game nights, celebrate birthdays and weddings and babies, and find a ton of small but mighty ways to support one another.

Travel season is tricky, though, because we're all out of the office at different times, visiting high schools and community-based organizations in our geographic territories. But absence just serves to remind us how much we need each other, and so it makes sense that we use those moments of distance to, well, leave each other "gifts."

Some of these surprises are nicer than others, but the general rule is that we go out of our way to personalize them.

For Jill, an avid scuba diver and sponsor of the Winter Term scuba certification project, we created an undersea grotto: 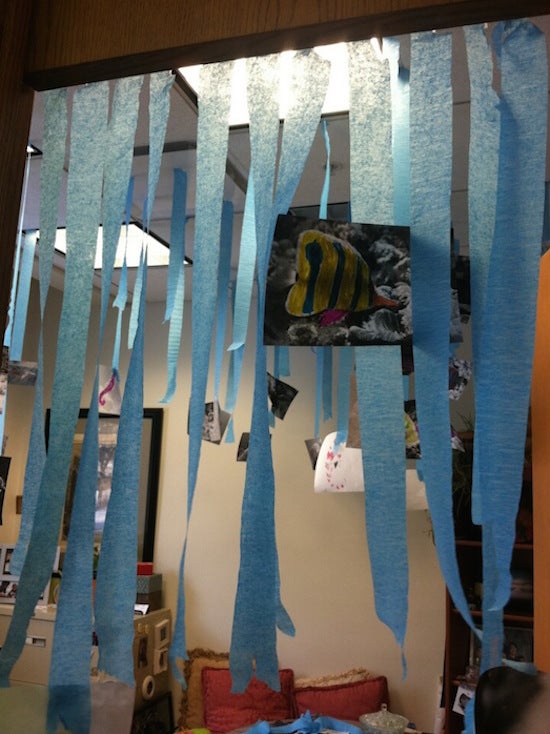 Dear Tom. They left him dentures, a hairpiece, and a few tubes of bengay. 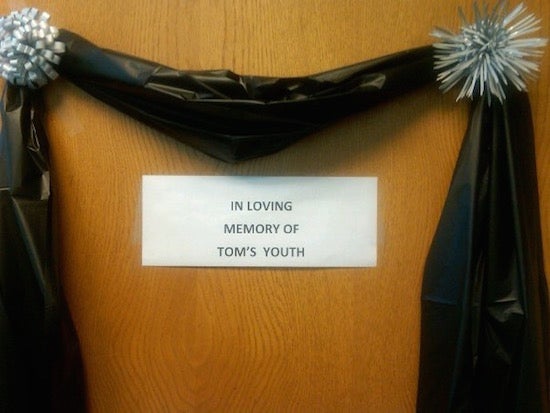 I love pie, so I really shouldn't have been surprised to return from a month away to find my very own pi(e) wall:

Josh and his daughters illustrated the numbers with little slices of pie and pizza!

And then we come to Jesse, newly returned to Oberlin....

Jesse was apparently something of a prankster when he worked in the Admissions Office from 2007 to 2012. Josh and Joel were frequent butts of his pranks, and now that Joel has left, it was up to Josh to devise something fantastic.

But we're a team, and we work best when we're bouncing ideas off of each other. My office turned into the planning room, and we threw out a variety of different options (stacks of file folders! plastic inflatable saxophones! alarm clocks, each set to a different time, hidden all over his office!). Eventually we settled on our theme... 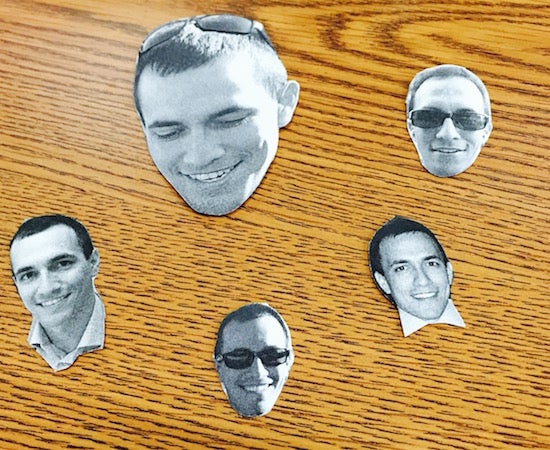 My desk has the weirdest decor

Jesse is a classically-trained cellist who now plays guitar in his Cleveland-area band. Clearly we had to plot something that references music, but we wanted to make it even more personal than that. 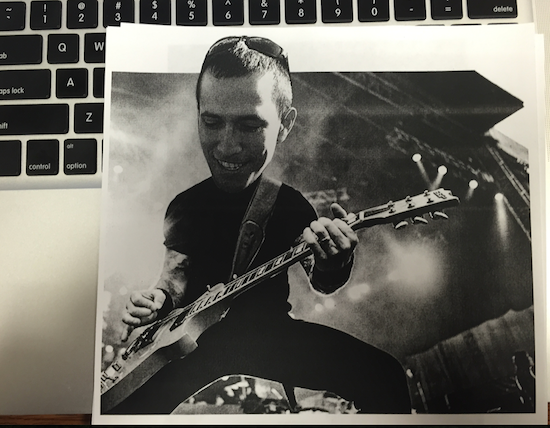 Throughout the week, colleagues popped into my office to offer suggestions of new guitarists to use (Do we have Josh Ritter yet? The Punch Brothers? How about Bob Dylan?). 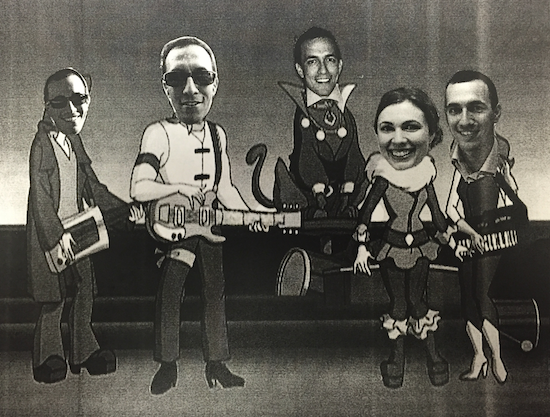 Even Scooby Doo made place for Jesse (and his wife)

Because photocopying over the heads of famous musicians makes it a bit difficult to figure out exactly who they are, we also left Jesse a few little clues: 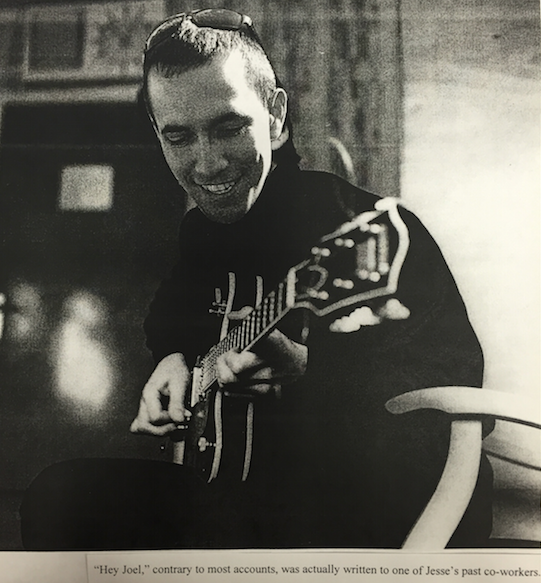 Three-quarters of the way through: 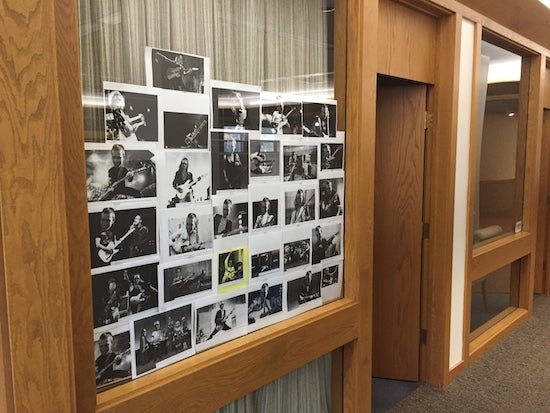 All in all, we have Jesse strumming his way through about 60 years of music.

The day Jesse returned to the office was also one of our Senior Visit Days. Jesse interviewed prospective Obies from behind a wall of photocopies of himself in a variety of outfits and hairdos. I'm not sure if he explained his Window of Awesomeness to our visitors or left them to come to their own conclusions.

At lunchtime, I caught Jesse and Tom trying to figure out who the actual musicians are in some of the photos. 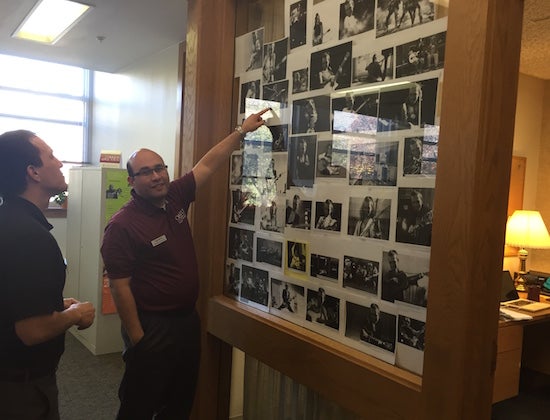 That one happens to be Liz Phair. Ahem, Jesse Phair.

The Window has been a topic of conversation in the hallway — "Look at Jesse Jett! Jesse Frampton! Jesse Sambora!" With each chuckle of recognition, we're collectively saying: Welcome back, Jesse.

And play on, J Swizzle. Play on.

Not sure what's better -- the pranks or the blog post!

Aww, this makes me miss working at Admissions so much!

Your office is delightfully clever in your pranking. I should swing by and see the fall travel season updates!