Left the Blind Boys of Alabama concert feeling elated. I wished they had played Credence, but damn, that was fun. I expected to have fun. I did not expect a mass of bodies moving together, touching and being touched by one another and none other than the ostensible lead Blind Boy whose name I cannot recall. "It's funny," my roommate told me later, "to see white people imitating what they think black people do at black church." I laughed, and told him I thought they were just high college students enjoying themselves at a concert.

But the night was still young, and I had no problem seeing my way over to the Allen Memorial Art Museum. Earlier that day I had found out that OCOC (Oberlin College Outings Club) didn't charge a fee for members to rent camping equipment. This ease was also the problem, for nearly all 25 tents had been rented out and we knew exactly where they were. Almost exactly. "I think it's around the side," I told my OCOC-member friend as we crossed over North Main Street.

The tents were inside the art alcove. An iPod was plugged into some white Harmon/Kardon or such speakers. The air moved to dubstep. A circle of students sat; talking, smoking cigarettes, laughing. It was pretty loud. We wanted to know who was in charge here re getting good art, so we wandered inside an illuminated hallway to find our authority figure.

Inside, a game of Risk raged across 6 continents. A piece of paper with names and numbers hung on the wall - our priceless find. We added our names and numbers. I still wasn't sure how the actual renting would go down, so I asked the guy watching us write what was up. "Yeah, in the morning, they'll go by the list. You have to stay here overnight, though; you can't sleep in your dorm room and then come back."

I realized how easy it would be to cheat the system. It was cold and the people in the courtyard seemed like bad roommates (in terms of sleeping) (which I really needed to do, because I was going to a frisbee tournament the following morning). I turned to my friend; he too knew this "honor code" was easily exploitable. Suddenly, I was filled with indignation at thoughts of my own legerdemain. Any common Obie can steal a Picasso. It takes a truly great one to wait in line for an artist no one's ever heard of.

"You do realize this is not much different from backyard camping for twelve-year-olds?" my friend said. I admitted that it was similar. "I'm actually kind of excited." We set up our tent outside of the courtyard, in plain view of the street and any who happened to be on it. As I climbed inside, I thought I heard some townies laughing at me - a college student who has no better use of his time (and tuition) to set up a tent in the middle of a well-developed, albeit rural, area. Does townie have a pejorative connotation?

My friend and I were hungry and untired. What had the rules said about going to Agave (a local burrito bar)? On our way over to Agave, we chatted about typical freshman stuff - the Oberlin bubble, globalization theory, burritos. Agave's windows were steamy as usual - the result of too much body heat or burrito steam. My friend ordered a burrito with steak and proclaimed steak to be the best of the meats at Agave. "Y'know," he admitted, "I judge people a little if they don't get the steak." The person making his burrito confirmed that indeed, the steak was the best. I didn't have much to say to the person making my burrito. I secretly wondered if he was a townie.

We opted to munch our burritos in Agave. As we sat down, someone recognized my friend. "Dude!" Apparently there was a party happening that very night - a Subway party. I asked what a Subway party was, and was told it's a party next to Subway (Eat Fresh, not subterranean). My friend and I thanked our fellow Obie for this pertinent information and finished our burritos while Pink Floyd reminded me of the 70s and 7th grade. Come to think of it, did I get steak or chicken?

Back at the tent, my friend showed me how to play Double Solitaire. I expected it to be boring (like Solitaire), but there was something about two people trying to beat each other that made it extremely compelling. The game ended when I spilled my drink on our two decks (don't worry, OCOC, I cleaned it all up), but we both conceded that I had the strategic advantage. I had left my phone in the dorm room, but my friend still had his. He set an alarm for 7:30am, and we climbed into our respective sleeping bags and fell asleep.

The morning came easily, but meeting it was a bit more difficult. I put on all the clothing I had brought and stepped through the zippered doorway onto the lawn of AMAM. An art-related commotion issued from the alcove. I woke my friend and we joined in.

There are not as many people as I thought there would be, but there is still a line. Two people with cameras take pictures of the crowd. Their badges tell us that they are here from the Office of Communications, making sure that even those who value their Saturday morning sleep can get a glimpse into what the Oberlin Art Rental Program has to offer. I don't even think to yawn - it's exciting in here.

An extremely well-dressed man appears out of the double doors that lead to the gallery. "Please leave all of your bags, coats, hats, and any other personal belongings downstairs," he says. "Let's have the first five come forward, please." The crowd cheers. I feel vaguely like I'm being inducted into some kind of Harry Potter-like sorting event, but there's no division here, only the democracy of the list. "Next five, please."

Inevitably, my friend and I get split between two groups of five. He mutters a good-natured expletive as I slip into the museum. I leave my personal belongings downstairs. The gallery itself contains a whole range of museum staff, plus an Oberlin police officer. Along the walls are the framed treasures - the art!

I'm too late to get a Picasso for my roommate, but I do end up getting two satisfactory pieces. One is an 18th-century Japanese woodblock print. The other is a postmodern something-or-other that looks cool. My friend chooses only one piece - something that his silkscreening professor did. We watch as they are professionally wrapped and made ready to transport. Then we ferry them across campus and deposit them in our respective dorm rooms.

After the whole ordeal, we're both pretty tired. I don't have time to hang the pictures up, so I lean them against my desk and head back to the campsite to pack up. With everything back in its proper place, we go out to Fresh Start to celebrate. I eat a lot, but not too much. After all, I'm going to a frisbee tournament in an hour. I am now (and until May 9) the proud owner of two real Allen Memorial Art Museum artworks. 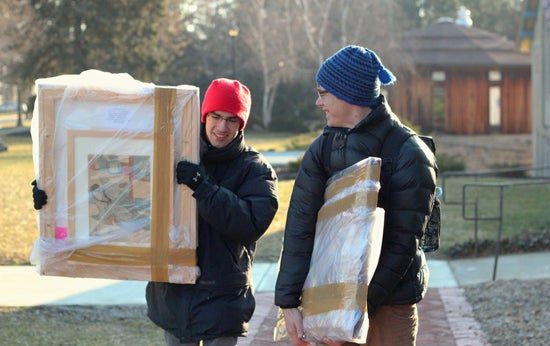 Above: Something interesting on the ground.

Townie can definitely have a pejorative connotation-- like small-minded, or provincial. It's definitely a thing in small towns.

I never thought about where everyone managed to get their tents for art rental before. I always wondered how that many Obies stored giant tents in their dorm rooms...