From time to time, we blogger folks really hit it big. And I'm not talking multi-million dollar movie deals or wedding invites from A-list celebrities. I'm not talking about sandwiches bearing our names or wax effigies made in our likenesses. Heck, I'm not even talking about any real recognition of any kind! What I am insinuating, however, is something bigger than all of that, something that only true fame (or perhaps just a modest amount of money and some curiosity) can buy. Not impressed? Well, I bet you won't believe what arrived in my mailbox this morning.

For the record, this is not one of those moments where I admit to having a Godfather-like waking-up-to-a-horse's-head-in-my-bedroom either. It all started about two weeks ago when I received an innocuous enough email message in my inbox. The subject header read: "Astrophysicist, Mario Livio - new book." And being the obsessive email checker that I am, I couldn't help but open it despite the threat of spam and entrapment written all over it. To my surprise, though, it was neither of those things, and what ensued was an email dedicated to the publicity of a particular book entitled, IS GOD A MATHEMATICIAN?

Now let me pause here for a minute. Ever since I became a blogger with Oberlin, I've had the esteemed privilege of getting about twice-weekly emails from strange out-there sources (most emanating from Johns Hopkins University), alerting me to all manner of news updates I have little to no interest in whatsoever. Here's an example: "JOHNS HOPKINS NEWS: WIRELESS MICROGRIPPERS GRAB LIVING CELLS IN 'BIOPSY' TESTS." OK, bad example. The closet scientist in me actually found that quite interesting. But you would probably agree with me that it's pretty farfetched. And that's just the tip of the iceberg.

The most recent of such emails sitting in my trash folder include publicity for a new Air and Space Science Center in New Hampshire, the ICOON application for the iPhone, and a psychology study out of Rice University that found that women's brains recognize and encode the smell of male sexual sweat. What did I do to deserve this? And better yet, how in the world did these people find me? I don't even remember including my email address anywhere on the blog. I must say that I love getting emails (hint, hint), so even reading something that's only the most vaguely personalized (i.e. addresses me by my first name) followed by a clearly hackneyed cut-and-paste media junket is still pleasurable to receive, especially when I'm feeling low.

It's a wonder, though, why outlets choose to specifically send me the content that they do. Nothing about my blogger profile, interests, or past posts would suggest that I like science, and yet I would estimate that 80% of these emails are science-related in their scope, whether that be engineering, chemistry, or astrophysics. Another 10% are comprised of publicity events--talks, public art shows, museum openings--that I am invited to take part in as a member of the media. Since when did I become a member of the media? The bottom part of the email makes it clear that I need only contact so-and-so to get my free press passes, a media kit, or an interview with the speaker/curator/person-in-charge of my choice. Most of these events are held in New York City, and though I spend most of the year at Oberlin, at least this appears like they did a bit more research on me prior to sending their semi-selective missives. Points for actually reading my blog. The last 10%, of course, are those things that fit no easy classification (read: sex studies out of Rice University, for example).

It doesn't hurt in all of this spam-bashing that these emails actually make me feel pretty darn important (see title of post). I can't help but smile to myself, knowing that somewhere, someone out there wants me to take the time to dedicate a blog post to whatever new information he or she hopes to proliferate to the masses. I guess hitting up the newly commissioned Oberlin Bloggers is, in fact, the vehicle they pinpointed to do just that. Of course, they probably actually just send out hundreds of these emails to unsuspecting blogger-types on a daily basis, but that won't stop me from feeling special.

In fact, there's something about that whole process that feels eerily familiar. As an intern with three media brands over the last four summers, I have learned a thing or two about publicity and marketing. And though I have only ever worked on the 'editorial' side of the magazine world (copywriting, editing, research, fact-checking) as opposed to 'publishing' (advertising, marketing, printing, business), content providers in all instances need to cast their nets very wide because so few of the fish actually bite. With the internet boasting tons of free, instant access to information, it is difficult for books and magazines to get a word in edgewise. That is why, increasingly, many of them are turning to the web to push their brands in new and interesting ways.

Last summer, for example, I worked for Popular Mechanics magazine (uh-oh, a science keyword, I'm doomed!), run out of the Heart Tower in the heart of Midtown, Manhattan. In addition to the usual intern duties (copying, faxing, responding to reader mail, occasionally writing stories), I had the boon of working with the web editors to better increase the popularity of our stories with traffic to the site. I didn't really understand the power and utility of blogs until I started working with them during my internship. It turns out that a lot of people actually look to them for pressing information. After we had written a story about the iPhone 3G, for example, I spent hours pouring over Apple-themed blogs trying to fish for popular posts, compiling a list of contact people to send emails in the hopes that they might link to our story.

Which finally brings me back to that email. After piquing my interest with an introduction to the book and the author, including a break-down of exactly what kinds of questions the book helps to answer ("Does mathematics exist out there, and we are merely discovering it, or is mathematics only an invention of the human mind?"), the person whom I later learned was the senior publicist for Simon & Schuster (which also runs its offices out of NYC), asked if I would be interested in receiving a copy of the book. Flabbergasted and almost to the point of tears, I responded to the email, all too happy to sign over my Oberlin mailing address for the sake of getting a free book (complete with all the other useless paraphernalia that would inevitably go along with it). 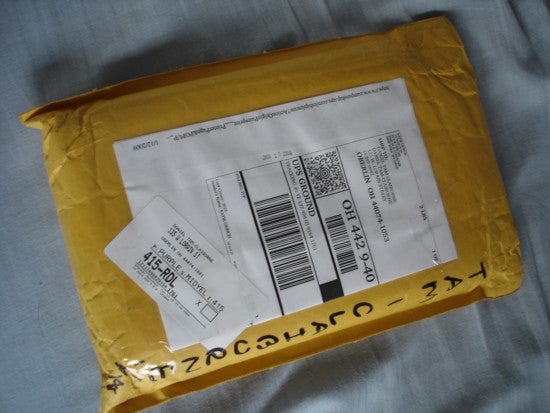 My mystery package, in all its enveloped glory.

But little did I think I would actually receive any hardbound scripture in the mail. It somehow seemed more likely that the publishers would convene and end up sending me a freeze-dried banana or something. Not that I would have minded that either. And so today, as the book had almost totally slipped my mind and entered into that hazy dream state, I peeked into my mailbox and found a gleaming blue sheet signifying the arrival of a package--a small one to be precise--and marched up to the mail counter to claim what the cosmic forces had deemed rightfully mine. Even the packaging struck a chord with me--a printable UPS packing sheet sealed neatly within a bubble mailer--as I had been all-too-familiar with the online shipping process over at Popular Mechanics. Now it was some other poor intern, probably an NYU undergrad, slaving away in an overrun workroom at Simon & Schuster, with dreams of college credits and on-the-job experience. 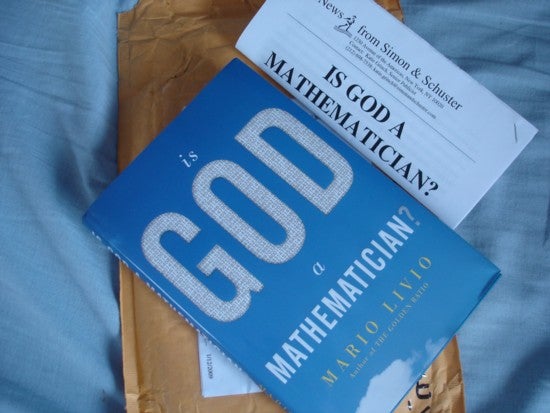 Voila! The mystery is revealed at last!

So there you have it. Who knows, after this entry, I might be more inundated with offers for free stuff than ever before. Or my pseudo-celebrity might instantly go to zilch. Of course in all likelihood, absolutely nothing about the frequency of these emails will change at all. You guys wanted a blog post, so I say, you got it! With any luck, I'll even get a chance to crack open that book and reap my spoils to fame.

Daniel,
I can tell you had a lot of fun writing this one! You were mad excited to get that book and it came across quite well.

Congrats on almost-famousness. Contrary to popular belief, it really is better than almost infamousness, but it doesn't have the same pungent cache...

P.S. Math was there all along. God is a practical joker/irony-freak/mathemetician... and probably a serious abuser of controlled substances, to judge by the state-o-da-world.

That's so funny, Ben, I actually passed the bookstore on my way back from brunch this morning and saw the book sitting in the "new releases" section of the window display. Pretty crazy stuff indeed!