All work and no play makes Karl a dull boy.

It's official. I think I've gone insane. Because whereas usual "claymation breaks" have consisted of me eating countless packets of delicious, gelatinous fruit snacks, watching the last of "The Tonight Show with Conan O'Brien" as we know it, and playing through Pokémon Silver (somehow I know that letting this fact slip will come back to haunt me), I have decided to use this break to write. Exactly the sort of pepping up I need after a seemingly never-ending cycle of: mold, click, mold, click, mold, click, mold, click, mold, click. This will totally get my blood pumping.

I kid of course. I am perfectly functioning, relatively healthy, and rambling on about my winter break is actually a bit refreshing.

Recap: My Winter Term project is called "Claymation Movie," or at least that's what I believe it will say on my transcript. A bit vague, I know. To clarify this clever yet confusing title, let me elaborate: For my Winter Term, I will be making a claymation movie, not unlike Wallace and Gromit or Gumby. A little better?

I have very quickly realized the appeal of stop-motion/claymation art. It's true that the slow pace of this process can be frustrating, especially when you realize you messed up bad and you have to reshoot dozens of frames again. One night was so annoying that I took my anger out by throwing a knife against the wall (A plastic knife, mind you. What kind of person do you take me for?! Sheesh). In spite of the struggles, when everything goes according to plan and you watch your work in motion, there are few things that I find more rewarding.

I know that I expressed a lot of doubt and uneasiness in my previous blog. I admit that I was very unsure if a month was enough to finish my goal of a 2-5 minute short. Well, I hate to toot my own horn but everything is going very smoothly. My fear of disappointment has calmed down for the most part. Of course, an unforeseeable accident (such as my hard drive exploding) will probably complicate things. Ignoring that, this Winter Term is a positive experience so far.

The next half of this blog has very little relevance to anything Oberlin. Really, it probably won't benefit anyone reading it other than me. If I had to somehow tie this into the greater scheme of my Winter Term, I could say something about how this particular Thursday was one way for me to keep my sanity, but I can't even type that with a straight face. But I feel like sharing this rather spontaneous day to at least have on record:

While I was eating lunch of noodle soup in front of the television and being slowly sucked into the ridiculous phenomenon that is "Jersey Shore," my two friends Brian and Matt came to save my brain. The plan? Go to the zoo.

This was no ordinary day at the zoo. First off, I can't remember the last time anyone decided to go to the zoo in January. I personally doubted that the Bergen County Zoo would be open to the public in the dead of winter, but it surprisingly was. As soon as we arrived there, we knew that something fishy was going on... or should I say something birdie?! (And the worst joke of the year award goes to: Karl Orozco!)

Hovering around the zoo entrance like a crowd of teenage scene kids at the nearby mall was a group of ten or so ducks. "Er... are those ducks supposed to be there?" we discussed to ourselves. They looked a bit too clean to be the normal, trashy New Jerseyan ducks that you find at the bar, but we concluded that they had to be loitering locals who had nothing better to do on a Thursday afternoon. After all, who lets ducks escape from the zoo?

Well, apparently the Bergen County Zoo does. Within five minutes, a staff member was seen herding the restless ducks back onto the zoo grounds. Some ducks were especially belligerent, quacking loudly and invoking "caws" and screeches from the bald eagles nearby.

The rest of the zoo's exhibits were pretty standard fare. A couple snowy owls, some fat prairie dogs preparing for hibernation, but we did get the mountain lions to impersonate a house cat and "meow!" At least, that's what it sounded like.

However, later on, things got real interesting. In the guanaco (essentially llamas) exhibit, a couple of rheas (flightless birds, like a smaller ostrich) were found scurrying around the guanacos. I'm not sure that they were accustomed to interacting with each other, because one aggressive guanaco kept charging after the rheas. The rheas were thankfully much faster, smarter, and much more agile than the guanacos, but it still got me a little worried. But then, a random peacock started roaming the guanaco exhibit as well! And I know for a fact that this peacock did not belong here, because 3 or 4 other peacocks were located in the exhibit next to this one. The same guanaco attempted to chase this peacock, until it did something that surprised all three of us: it flew to the top of a nearby building! Don't they clip captive birds? And shouldn't there be someone on duty?

Continuing with this theme of odd birds, Matt, Brian, and I met up with 5 other friends to go to Cluck-U in Hoboken (accent on the second "o"). This place is notorious for absurdly "911" hot wings, and even has a Wall of Flame for the brave and stupid contestants who finish 10 of these demonic wings within 5 minutes. Matt and another friend Austin were feeling exceptionally bold today and both ordered themselves some "911 Challenges."

After they ordered their baskets of blazing wings, the lady at the register picked up an ominous, black phone and said just one word: "Two."

The manager came to the front with a couple of waivers for my loopy friends. When they force you to sign a contract that claims the restaurant is not responsible for any spiciness-related injuries, you know that you're getting yourself into something dangerous.

I took a peek at the Wall of Flame and noticed there were a modest 20 winners of this 911 Challenge. Common amongst all of them were a couple things: red faces, sweat dripping, and sauce covering their numb lips.

The two baskets came out and the manager brought a timer as well. We took a whiff of this deadly meal, and smelled something similar to burning rubber and death. Let it be known that these wings did not look in the least bit appetizing. They were blackened to a crisp and one drop of the sauce is enough to burn your lips. Before the test began, a few ground rules were laid: no beverages, only one napkin per contestant, and a 2-minute waiting period must follow the 5 minutes of eating in which the contestant cannot consume any drink. After hearing these regulations, I could only smirk.

The timer started as Matt and Austin began chowing down. Both devoured the first of ten wings with ease, but as soon as the second wing hit their tongues, tears started to flow down their cheeks. Matt forcibly consumed the second wing, but Austin could not take it anymore. With faces burning, eyes watering, and mouths begging to scream but simply frozen because their brains were both thinking the same thing: DO NOT EAT.

Needless to say, they both lost. They pillaged the only bathroom and filled the sink to the brim so they could dunk their flaming lips and faces into a refreshing bath of cold water. Thankfully neither of them threw up. We all felt incredibly bad for their poor digestive systems. Both agreed that those foolish humans who consumed all 10 were probably demi-gods. They were also equally upset over losing $9 for an unappetizing and confidence-breaking meal. But hey! At least their sinuses are cleared for life.

As I quickly steer this blog back to the original point, here are a few teasing photographs from my Winter Term project. Enjoy as I get back to work! 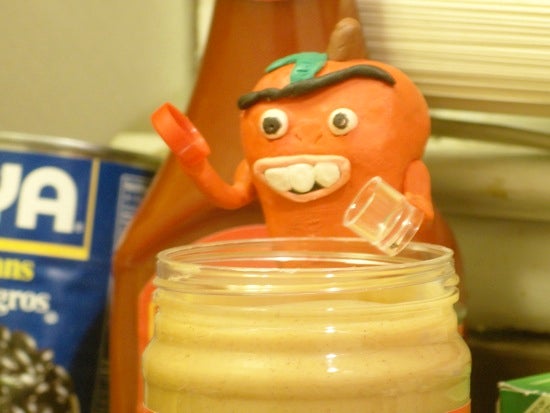 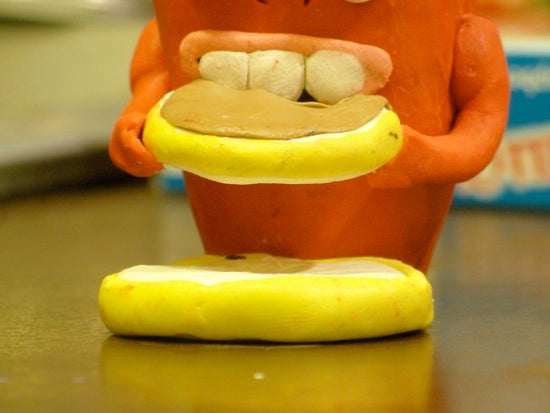 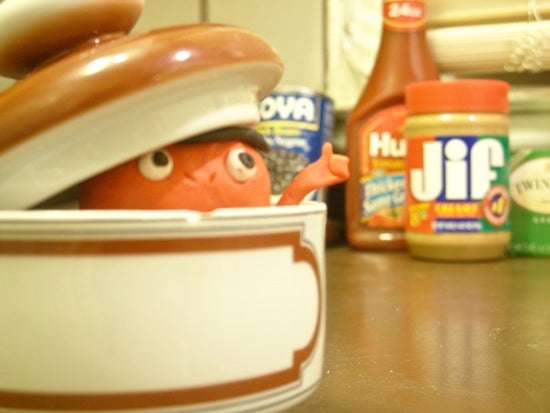 ...I still don't understand why restaurants will make food that people can't eat. And charge them for it.

Those photos are adorable and wonderful! I can't wait to see this movie!

That was awesome. My sleeping habits are all messed up. completely.

This blog entry made me laugh like no other.

I'm from Jersey too- but I haven't lived there in about 6 years now. I guess I'm a Marylander now.

The only food challenge I know of in my home area is at Cheeburger Cheeburger. You have to try to eat all of a pound burger in a certain amount of time. It's pretty lenient though, so if you go when you're fairly hungry and eat fast enough that you don't realize you are full, you can usually win.