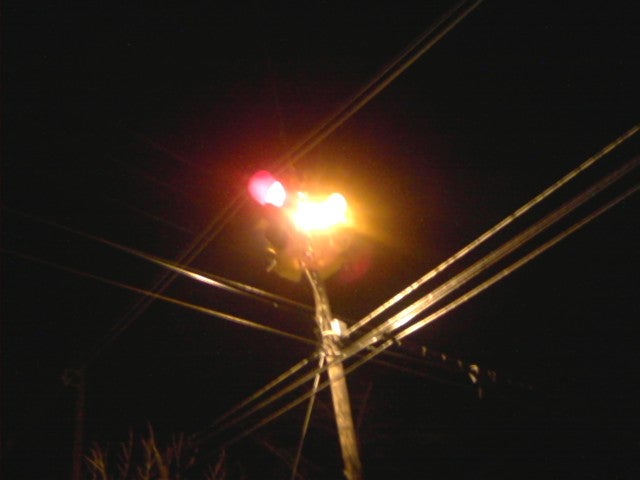 On Saturday night, a few hours short of sunrise, my friends Tim and Aseem and I were lying in the middle of an intersection on the southwest side of town, watching the blinking yellow and red lights on the stoplight above us. All Notebook-movie-style, the scene was wonderfully peaceful - whimsical, really. Picture three of us lying on our backs with our heads on each other's stomachs, listening to the birds waking up, and talking about life after college (Tim graduated last year, I graduated last December, and Aseem's taking a semester off to do some soul searching).

As an unofficial representative of the college in this blog, I am in no way encouraging people to lie down in the middle of streets - however, for what it's worth, if there's anywhere to do it, Oberlin's the place. It's unbelievably serene at night. We stayed there for almost half an hour before headlights finally surfaced on the horizon a dozen intersections away and caused us to get up and get on the move (to Tim's place - hey, who said the joy of sleepovers need be confined to elementary and middle school?).

That followed on the heels of a long nighttime walk through the deserted streets of town, arms linked, three abreast, singing, chatting, being generally silly. We made our way to the Oberlin reservoir, an expansive lake that sits on a plateau tucked into the woods off of Pyle-South Amherst Road. There, we sat at the edge of the water for maybe an hour or so, feeling young and infinite and to paraphrase a line from my favorite movie of all time, just exactly where we wanted to be.

I've already written some about my friendship with Aseem, but here's the scoop on Tim: he was already a sophomore when we met, but Tim was one of the first friends I made when I came to Oberlin, in my Cinema Studies 100 class. We hit it off right away, bonding over a mutual love for the afore-referenced movie. We established an Eternal Sunshine Facebook tribute group together. We made a short film for class with our cinema studies small group. Though we drifted apart some during our years at Oberlin, we started hanging out again last summer, and even more so in the fall, when we actually went on a couple official (awesome!) dates together. There was nothing serious about the dates - no expectation of them necessarily going anywhere - but just the two of us saying to each other, Hey, you're cute, I enjoy your company, let's spend some more time getting to know each other!

Allow me to go on a tangent here: College, in general, just seems to induce a lot of leaping straight from "hooking up" to longterm relationships. But hopeless romantics, take heart - there *is* backlash out there. There has been a movement at Oberlin (and perhaps, I imagine, at other colleges across the country too) to invite casual, lively dating back into the modern romance world. Last week, Oberlin's Center for Leadership in Health Promotion led a light-hearted workshop on that very notion to a packed room. Obies like Tim are doing their part, too - that is, not being shy about initiating dates - which is awesome and laudable, in my opinion.

These days, both of us are in serious relationships (not with each other, to clarify), having come to the conclusion we're much better suited as friends than anything else - but it doesn't mean we both don't have fond memories of getting a little dressed up for each other, wine-and-dining in fancy places, going out to the movies, and suchlike. Honestly, who doesn't love a good date?

But back to the three-musketeers dynamic that Aseem and Tim and I are lucky enough to have going on. Both are great guys - intelligent, open-minded, gregarious, goofy, fun-loving, and deeply compassionate dudes - the very kind I came to Oberlin hoping I'd meet! Having a hunch they'd get along, I invited Tim along to a karaoke night that Aseem had invited me to at the Loco Leprechaun, an "Irish Cantina" in Westlake, a Cleveland suburb down the road from Oberlin. As predicted, they got along right off the bat, and quickly graduated to doing spectacular karaoke duets together - and thus Tuesday Karaoke at Loco has become our official tradition. Tim also recruited Aseem to write on a blossoming sports blog he started with another Oberlin alum: Outside The Box Score. Pretty sweet. Don't we look like fun?

Though Tim stuck around after graduating last year to work in town, sadly now he is moving on and finally leaving Oberlin, at the beginning of this week (to go to Europe for a month with his wonderful girlfriend, Sarah, and then move to Indiana with her!). Aseem and I are both heartbroken to be losing our third musketeer - but last night helped me, at least, process that loss. Any fork in the metaphorical road of life usually means saying some goodbyes; I remember vividly feeling many of the same emotions I'm dealing with now - knowing I will be leaving Oberlin in a couple more months myself - that I felt the summer after I graduated high school. That summer contained a lot of nights sitting with friends on bridges in Kansas, legs dangling off the edge, watching the traffic go by below, and musing about the future, the past, the role of change in personal growth...basically, accepting that nothing will ever be the same again - but that being okay, because change is a catalyst for forward movement. It will transport you to new, amazing places you probably cannot even fathom now.

I teared up like crazy reading this. But I think I was crying at my terrible picture more so than the emotions evoked from reading your post. Isn't there some rule about needing approval to post pics of someone else on an official blog? You, madame, DID NOT have my official approval on that one.

Aseem -
I'm pretty sure if it was your official Facebook user photo at one point, it's fair game. And it's not a terrible picture, you look mad classy...but if you want me to change it, let me know and I'll be happy to oblige!

As my brother told me before I went to college:

"Dating in college is like, 'put the keg here.'"

It's nice to read stories that paint a less, well, frat-ish view of things. I mean, my brother also told me that when you vomit it means that there's room for more. So, there's that.