This fall break, Wilder Hall’s DeCafé received a makeover. After careful planning and input from students and members of the dining committee, a revamped dining and retail area was unveiled. The reconfigured space boasts improvements such as an expanded grocery store and wider aisles that allow for greater accessibility.

Visitors to the upgraded DeCafé can now enjoy an expanded grocery store featuring designated sections, including gluten free, produce, sweet and salty, and local to Ohio. To accommodate the broader selection of products and improved layout, the seating formerly inside the DeCafé is now located in the Rathskeller.

“The expansion of the grocery store provides us with more space for customers to shop without forcing them into a small space where others are in line for sandwiches and smoothies,” says Daron Frederick, manager of the DeCafé. “Customers can now move about the store more efficiently and take more time to make a decision, especially in the rush periods.”

The impetus for these changes was not only for efficiency but also to better meet campus needs. “Now that DeCafé accepts board swipes, foot traffic has greatly increased,” says Frederick. “The previous layout wouldn’t allow for this volume of customers to both shop and wait in line for smoothies and sandwiches. We had to expand to properly function and meet the needs of our customers.”

Among other introductions is a self-service panini station, similar to stations at Dascomb and Stevenson Halls. “This station will improve efficiency in the sandwich line by allowing students to customize their sandwich without being made to feel rushed by customers behind them,” says Frederick. The existing oven behind the service line will still be utilized for those who order hot sandwiches.

Frederick notes his team is actively monitoring this new layout, and they are committed to making sure this new configuration is an optimum one. “As we analyze what works and what doesn't, we may make some additional changes. We’re always looking for ways to improve the look, feel, and ease of use of the DeCafé.”

Members of the Oberlin community are welcome to provide input during the dining committee meeting held every Wednesday at 2:30 p.m. in Stevenson Dining Hall’s Biggs Conference Room.

A picture of a chef at work on the opening day of the certified kosher kitchen in Talcott Hall serves as inspiration for this week’s photo series. 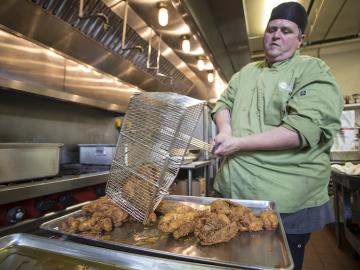 Sometimes there's nothing like a warm bowl of comfort after a long day. To help fill the craving, AVI staff members share some of the dishes that give them the warm and fuzzies, from fried chicken to cream puffs. 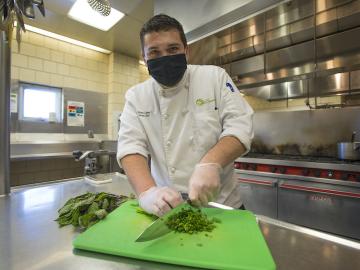 Find out what this chef's favorite thing to cook is, and learn about how dining hall ingredients are sourced locally. 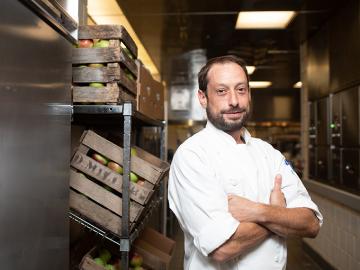