A manuscript from Assistant Professor of Neuroscience Christopher Howard’s lab was published in the journal PLOS ONE.

Habits can be explained as inflexible and automatic behaviors. Assistant Professor of Neuroscience Christopher Howard’s lab investigated how the brain encodes habits and shared its findings in “Lesion of striatal patches disrupts habitual behaviors and increases behavioral variability” which was published in PLOS ONE. The article was written by Howard and students Jacob A. Nadel ’19, seniors Sean S. Pawelko and Della Copes-Finke, and sophomore Maya Neidhart.

“Habits are efficient,” says Howard. “They allow an organism to think about other things while responding to the world. However, not much is known about how the brain does this.”

What the group in Howard’s lab did know was that a deep brain region called the striatum is needed for normal habit formation.

“Within the striatum are unique neurons called “patches” which were discovered 50 years ago and the function of which is unknown,” says Howard. We lesioned these neurons, essentially disrupting their activity, in a transgenic mouse model and tested them for habit formation.”

The group found that mice with lesioned patches have impaired habitual behaviors and that their behavior becomes more unpredictable from day to day. They believe this suggests patches play a role in stabilizing behavioral patterns over time.

The publication’s lead author, Jacob A. Nadel ’19, completed significant work on the project, developing and designing experiments in close collaboration with Howard.

“I performed dozens of surgeries, ran mice on behavioral tasks nearly every day for months, and analyzed most of the data,” says Nadel. “I also coordinated with other students to ensure someone was running the experiment daily, and then took the lead on writing the manuscript and preparing figures.”

Nadel currently works as a postbac fellow in the Intramural Research Training Award program at the National Institute of Health (NIH), and he says that this research in Howard’s lab had a major impact on his post-Oberlin career trajectory.

“One of the major advantages of Oberlin is there aren’t graduate students and postdocs. This means that undergraduate researchers are free to lead their own projects, gaining experience in operating independently and thinking critically about experimental design while working under faculty members. These skills undoubtedly helped my secure my path at the NIH.” 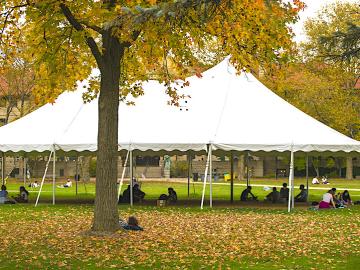