Since August, a small contingent of students have been meeting regularly to plan and produce a beloved event that brings together the Oberlin College and Conservatory of Music and the greater Oberlin Community.

All of the planning came to fruition on the evening of December 13, 2016, during the eighth-annual Empty Bowls Holiday Brass & Organ Spectacular. The First Church in Oberlin was filled nearly to capacity as attendees listened to a festive concert performed by musicians from the Oberlin Conservatory’s brass, percussion, organ, and vocal studios. The evening’s sing-along portion not only included a spirited rendition of The Chimpmunk Song arranged by third-year Zoe Cutler, but also featured the young voices of the Oberlin Choristers’ Dulcis Musica and Jubilate Musica. Following the performance, nearly 500 colorful pieces of pottery, handmade by members of the Oberlin Pottery Co-op, were available for sale.

The annual event serves as a fundraiser for Oberlin Community Services, a charitable organization that helps feed families, heat homes, and provides help for those in need in Oberlin and its surrounding communities. The event was born in 2008, the brainchild of Michael Roest ’06, former teacher of brass studies and performance librarian and operations manager. But with the departure of Roest earlier this year, the fate of the concert was not so certain.

“At the beginning of the semester, a few friends started asking me about the event,” said third-year Zoe Cutler. “When we found out Michael was leaving for a job in San Francisco we all thought – ‘well, what is going to happen to the event?’ People really look forward to it.”

That’s when Cutler, a trombonist and arranger studying classical and jazz trombone performance, along with Oberlin Pottery Co-op president and fourth-year Julie Cantwell, and two of their peers stepped in to lead the highly-anticipated, philanthropic event.

“We started planning at the beginning of semester, advertising and getting community sponsors,” said Cutler. “I made the event poster and program, and I also coordinated the musical portion of the evening.”

In producing the evening, Cutler stressed how involved the process was and how much effort goes into planning. “It’s been a journey for sure,” said Cutler. “It’s been amazing to realize how much Michael took on with performing, conducting, and even making pottery. This year we had to split the roles.” By sharing responsibilities, the students were able to produce a tremendously successful event.

That journey involved more than just planning the musical portion of the evening. It also required crafting hundreds of beautiful, handmade pottery pieces, the proceeds of which directly benefit Oberlin Community Services. That’s where 18 members of the Pottery Co-op came in, together making more than 450 bowls, cups, and other pieces to sell for the fundraiser. The process by which the pieces are made is extremely time consuming. Not only do members of the co-op make clay and glazes for the bowls, but they also gas fire the pieces in a kiln at the co-op.

Oberlin resident Jack Flotte woke up early the Friday before the fundraiser to open the chilly co-op. “At 7 a.m. I turned on the furnace to heat the space. It has to heat slowly so it doesn’t shock the kiln,” said Flotte. Only after the room warms can he begin firing the pottery in the kiln. A seasoned ceramist and co-op member, Flotte has seen this process through many times. He carefully monitors the kiln, checking it every half hour. “It’s a millennia-old tradition that takes nearly 20 hours to complete,” explained Flotte.

The pottery made at the Oberlin Pottery Co-op is different than what one would find at a “paint your own pottery” studio. “The glazes that come from a gas firing are really pretty," explained Julie Cantwell, president of the Pottery Co-op. “At a paint your own pottery studio, pieces are fired in an electric kiln. You push a few buttons and you’re done. In our kiln, we’re reducing the oxygen that’s feeding the fire so that the fire eats all of the oxygen in the glazes,” said Cantwell. This process is what produces the striking, speckled look. “It’s a laborious process,” emphasized Cantwell.

The $9,000 raised this year from the sale of the pottery during Empty Bowls will directly support Oberlin Community Services’ emergency assistance and food pantry. “The impact of this event is significant. We continue to see the needs grow in our community,” said Executive Director Cindy Andrews. “Just this past weekend we served more than 150 families as a part of our second Saturday food distribution.”

With students planning the event between demanding course schedules, extracurriculars, work, and other commitments, coordinating Empty Bowls has been no easy task. But it is one close to the hearts of many. “It’s important to Oberlin Community Services and the Conservatory of Music,” emphasized Cutler. “It brings together the college and the town in a very positive way.”

With the hurdle of producing the event for the first time cleared, the future of Empty Bowls looks promising. “We’re going to continue the tradition,” said Cutler. “We’re hoping to establish a leadership group so the event exists for years to come.” 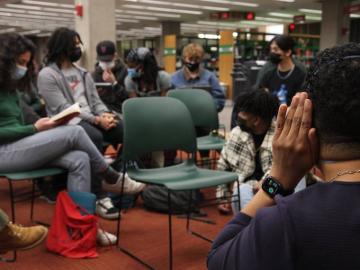 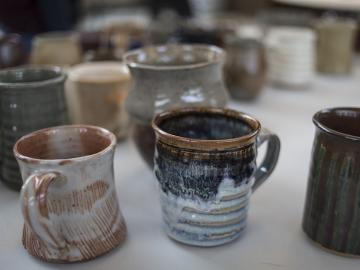 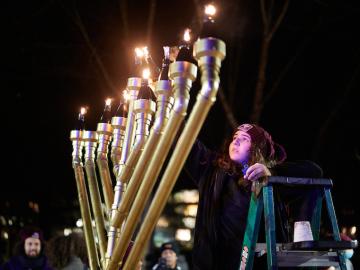