Commencement/Reunion Weekend is set for May 24 to 27, 2013. Commencement exercises will take place Monday, May 27, on Tappan Square. This year's Commencement speaker is novelist Tracy Chevalier ’84, author of the bestselling book Girl with a Pearl Earring (1999) and the just released The Last Runaway (2013). She also will receive an Honorary Doctor of Fine Arts.

The Baccalaureate speaker is Tarunjit Singh Butalia, current Secretary General of the World Sikh Council-America Region and the Moderator of Religions for Peace – USA.

Seven hundred graduates took part in commencement exercises during a sunny morning on Monday, May 22. Darren Walker, president of the Ford Foundation, was the speaker for the college’s... 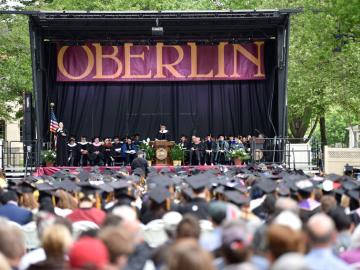 Rabbi Jill Jacobs will give the Baccalaureate address at 1:30pm on Sunday, May 21 in Finney Chapel.
View all Campus News stories