On a research trip during fall break, Janet Fiskio, associate professor of environmental studies and comparative American studies, led a group of students to Alabama to recommence their environmental justice project in Africatown, located on the outskirts of Mobile, Alabama.

Continuing the project from last semester’s spring break trip, students worked alongside members of the Mobile Environmental Justice Action Coalition (MEJAC) surveying Africatown residents about the health threats posed by the many industries in the community.

One of the suspected pollutants in the area is a class of chemical contaminants called dioxins—often produced by paper making factories. A high level of exposure to dioxins has been linked to increased rates of cancer, heart disease, diabetes, and chloracne, a debilitating skin disease.

“It was draining and heartbreaking at times to be in Africatown, simply because I saw firsthand how people were suffering from different types of ailments caused by pollution,” says third-year performance studies major Anthony Moaton.

The environmental justice issues in Africatown are numerous: an underground fossil fuel pipeline runs through the backyard of a local school, vats of toxic tar sand are stored in sprawling tank farms, and large warehouses and plants dominate the region. In total, Africatown hosts 11 different industries.

According to fifth-year environmental studies major Dru Baker, sites like Africatown illustrate an important aspect of environmental justice: that the battle is not limited to pure environmentalism, it is a complex cause with many connected variables, an opportunity for intersectionality.

“It is no surprise that many of the backyards of people of color are being used as the dumping grounds for radioactive and toxic wastes; one can see it with the influx of asthma cases in Harlem, the demolition of mountaintops in native lands, and the high-volume pipelines that begin with the Alberta tar sands. When people realize that social justice and environmental racism are intertwined, a larger community is able to get involved—not just the white, middle-class audience generally associated with environmentalism.”

Similarly, Moaton suggests that Africatown’s history (it was the destination for the last illegal shipment of enslaved peoples into the United States) speaks to a tradition of racialized silence and stagnation among the people of the region, a tradition these students say they are hoping to change.

“The silence is the scariest part of the intersections of environmental and racial justice. Black people have not been allowed to ‘make a scene’ or speak up, and the silence isn’t apathy, it’s generations of knowing that it won’t matter. It’s humbling to see a community of black people making steps to ensure that people know that they matter.”

In a follow-up trip this winter, Fiskio and another group of students will continue the work they’ve started and begin progress toward a full environmental site assessment of Africatown with Baheth laboratories, another partner organization.

After several life-changing experiences at an early age, Jasmine Wilkerson ’23 decided to pursue a medical degree so she can perform crucial surgeries through medical missions abroad.

Renée Geyer, Emily Humphreys, and Michelle Liu received honors from the Botanical Society of America for their achievements in three different types of botanical research.

A senior member of the of the North American Nanohertz Observatory for Gravitational Waves, Emeritus Professor of Physics Dan Stinebring studies how gravitational waves affect the universe and our Earth. Jakob Faber ’21 and Hengrui Zhu ’21 have been working alongside of Stinebring, which has provided them with opportunities to attend international conferences and listen to scientists from around the world. 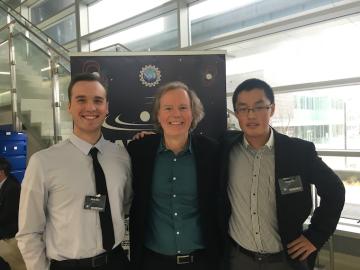