Seohyun Kim, a 13-year-old violinist from Seoul, South Korea, was named the top prize winner of the 2022 Thomas and Evon Cooper International Competition at the conclusion of the Finals held in Oberlin Conservatory’s Warner Concert Hall on Friday, August 19.

The jury deliberated for fewer than 15 minutes before emerging with its decision. The competition's top honor is accompanied by a $20,000 cash prize.

“We had an amazing group of participants for the 2022 Cooper Competition. The finals were a real treat to listen to,” beamed Cooper violin competition director and Oberlin violin professor Sibbi Bernhardsson.

“Seohyun Kim is a special talent,” said Bernhardsson. “Her music making is pure, sincere, and gorgeous. I could not help thinking to myself, as she was playing, that this is what it must have felt like listening to a young Menuhin.”

Earning second place and $10,000 was Sameer Agrawal of Chicago, Illinois, who opened the evening. Calvin Alexander of Shreveport, Illinois, earned third place and $5,000, and concluded the concert. 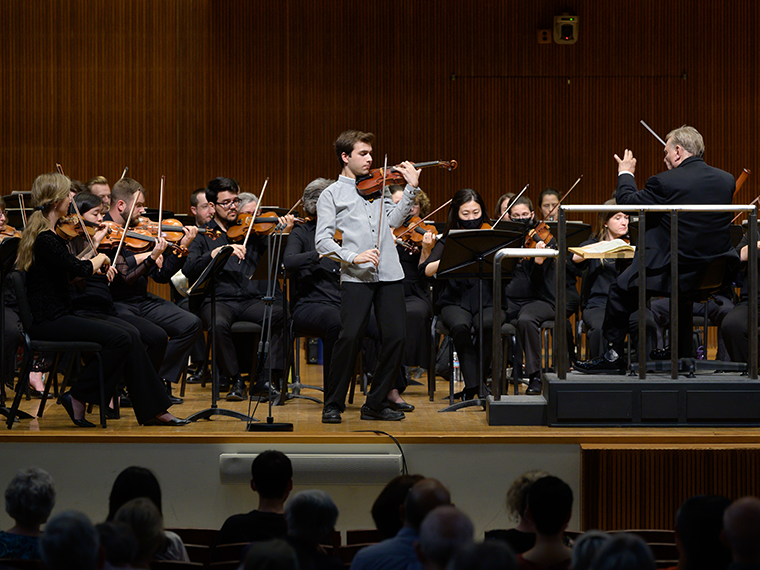 In advancing to the Finals, all three violinists also earned full-tuition scholarships to attend Oberlin Conservatory.

In addition to the cash award and scholarship, this year's expanded prize package for the winner includes a two-year loan from Jonathan Solars Fine Violins of a rare Italian violin made by Venetian violinmaker Marco Antonio Cerin (circa 1785-90); a two-year partnership with MKI Artists for ten concert engagements of recitals or concertos over the next two seasons; and exclusive rights to the premiere and performances for two years of a new six-minute work for violin and orchestra composed by Jeff Scott. The piece is titled  O Canto do Uirapuru or "The Song of the Musician Wren."

“The extended prize package has made this a important and meaningful competition for a young violinist,” assures Bernhardsson.

Bernhardsson was joined on the jury by Danielle Belen, violin faculty at the University of Michigan; Philip Setzer, founding member of the Emerson String Quartet; and John Zion, managing director of MKI Artists.

Now in its 11th year, the Cooper Competition is presented annually by the Oberlin Conservatory of Music. The format alternates each year between piano and violin. The 2022 competition was broadcast by The Violin Channel. Next summer will bring the Cooper International Competition for piano.

The competition’s 2022 field consisted of 17 violinists, ages 13 to 18, hailing from six countries and nine U.S. states. They competed for five days on the campus of Oberlin College and Conservatory, with the Finalists determined by Wednesday’s Round Two recitals.

In Wednesday’s Recital Round at Oberlin, Audrey Goodner (16) of Reston, Virginia; Bianca Ciubancan (16) of Chicago, Illinois; and Kento Hong (age 16) of Edgemont, New York; earned fourth through sixth place, respectively, and each took home a prize of $1,500. Hong also earned the Audience Prize, which includes an award of $500. Ciubancan earned a special prize for the best Bach performance. Goodner won special prizes for best performance of Mozart and best performance of the 2022 Competition compulsory work—Jessie Montgomery's Rhapsody No. 1.

ABOUT THE COOPER COMPETITION: Founded in 2010, the Thomas and Evon Cooper International Competition is dedicated to presenting an important international competitive opportunity to outstanding young musicians. It is made possible through the generosity of Thomas Cooper, a 1978 graduate of Oberlin College, and his wife, pianist Evon Cooper. The Cooper Competition alternates annually between piano and violin and is open to participants between the ages of 13 and 18. Past winners include pianist George Li and violinist Johan Dalene, both of whom have cultivated outstanding young performance careers.