In a single year, the departments of theater and dance stage between 15 and 18 performances, many of which take place in Hall Auditorium and Hall Annex’s Little Theatre. And each year, the challenges associated with those spaces have been that of scale: Hall Auditorium is a 501-seat theater, and the adjacent Little Theatre is an 80-seat house. Without a performance space that offers seating somewhere in the middle, the departments have been limited in the types of productions they can turn out.

“For nearly 70 years, we’ve had to operate in an ‘either/or’ scenario,” says Eric Steggall, managing director for the departments of theater, dance, and opera. “We’ve been hoping for a third theater space that is not as large as Hall Auditorium but is bigger than the Little Theatre.”

Now, thanks to a generous donation from the Eric & Jane Nord Family Fund and other donors, that hope has become a reality through the development of the Eric Baker Nord Performing Arts Annex. This newly constructed building will be situated between Hall Auditorium and the Peter B. Lewis Gateway Center. A highlight of the new building is the Irene & Alan Wurtzel Theater. Through the generosity of Irene and Alan Wurtzel ’55, this highly adaptable space will accommodate between 250 and 300 seats. The Nord Performing Arts Annex will also boast a lobby, scene shop, laundry facility, restrooms, and other necessary spaces.

“The Eric Baker Nord Performing Arts Annex will give us, and subsequently the rest of the campus and greater Northeast Ohio, a flexible, medium-sized performance venue,” says Steggall.

This kind of adaptable space—one that allows for seating to be rearranged around a stage—is especially relevant to today’s student and theater practitioner, says Steggall. “It will introduce a whole new paradigm of curriculum and opportunities for the campus and the college.”

The new theater space will also allow the department to experiment with different types of productions. “It allows for modern curriculum,” says Steggall. “There’s a difference between sitting in an audience, looking at actors on stage as you would on a television screen, and looking at actors in the round as they can in this new, flexible space. It changes the energy dynamic, the approach, and the sightlines.”

According to Steggall, a performance in the round leaves little room for error and requires a greater attention to detail. “All the elements of the show have to be finished to a different degree. The audience sees the back of furniture and scenery, the costumes are 10 feet rather than 40 away, and the actors have an audience on all sides. We’ll have a completely different kind of approach to our productions.”

Concurrently, a much-needed renovation to Hall Annex will also take place, thanks to a generous donation from musical composer John Kander ’51. Originally used as a television studio, Little Theatre is considered by many in the theater department as a “found-space” adapted to function as a theater—but the very nature of it presents functional challenges. Following its renovation, the performance space will be renamed the John Kander Little Theatre in his honor.

Upon the spaces’ completion in August 2018, the Eric Baker Nord Performing Arts Annex and the renovated Hall Annex will adjoin directly with Hall Auditorium, creating an interconnected performing arts complex.

According to Stegall, the project is transformational for anyone who is interested in theater performance, and he sees the renovation as a “major hook” for the students who are visiting or intending to become a theater major. He also sees an opportunity to bolster the college’s profile in Northeast Ohio.

“This project will revitalize, legitimize, and validate modern approaches to curriculum development and entry points to the professional world for our students,” says Steggall. “It’s galactically exciting.”

The project was made possible with the support and leadership of the following individuals:

Located in the Hotel at Oberlin, the Birenbaum Innovation and Performance Space encourages entrepreneurial efforts. 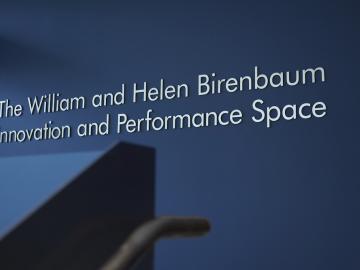