A surprise phone call led to a life-changing experience for soprano Elissa Pfaender ’16.

Elissa Pfaender was on her way home from work in Princeton, New Jersey, on January 3 when she got the call from Sarasota Opera.

Two days later, her flight had landed in Florida, and the Oberlin-trained soprano was about to embark on a three-month journey as an apprentice artist in a brand new town. The opportunity presented itself at the 11th hour when a fellow apprentice artist fell ill just prior to the company’s 60th anniversary season.

Over the next three months, Pfaender sang in the chorus of three operas (Turandot, Die Zauberflöte, and Nabucco), covered the role of First Lady in Die Zauberflöte, and performed a variety of scenes and arias in concerts. By the end, she was named Outstanding Apprentice Artist by the Sarasota Opera Guild.

‘‘Singing with Sarasota Opera was a dream come true,’’ says Pfaender, a former student of Salvatore Champagne at Oberlin Conservatory. “Ever since I heard about their young artist program, I knew that it was something I wanted to be a part of.

“It was quite a whirlwind experience, which I am so thankful for,” she says. “I wouldn’t have changed a single thing!”

Now back in Princeton, Pfaender will be a vocal fellow this summer with the Manchester Music Festival in Stratton Mountain, Vermont, where she will work with acclaimed vocal coach Warren Jones. She frequently finds herself in and out of New York City for auditions, so time will tell what’s next.

“I think with this career, success comes from when preparation meets opportunity,” she says. “With my skill set I gained from Oberlin, I am prepared for any opportunity that comes my way.”

Following are excerpts from our interview about Pfaender‘s Sarasota experience. Read more at oberlinconservatory.tumblr.com.

Did you have any particularly striking learning experiences along the way?

We were constantly busy with rehearsals, but I had the best time! I think my favorite learning experiences were working on the apprentice artist concerts. They were opportunities to work on some dream roles, and I was challenged vocally, dramatically, and musically. The wealth of knowledge from the staff is endless; it was inspirational to work with and learn from them all. It was also so fun to collaborate with my fellow apprentice artists on the concerts. After spending a few months together, we really felt like family, and it was so much fun to watch each other’s growth.

Juggling multiple shows and new concert repertoire must have made those months fly by. Now that you’ve had some time to reflect, are there any moments from the program that stay close to the front of your mind?

We presented our first apprentice artist concert just two weeks after we had all arrived, and I was given two big scenes from the operas Anna Bolena and La Forza del Destino. It was a big night, and I was feeling a bit of pressure as a last-minute addition to the apprenticeship program with only a short time to prepare the music… I wanted to do a good job. However, I couldn’t have asked for better colleagues to sing with that night, and I felt really prepared musically and dramatically due to the staff. It was absolutely magical to step out on that stage and hear my voice in the house for the first time. I knew in that moment that I was meant to be there and that the next three months of performing in that theater would be thrilling. And they definitely were.

Did you have opportunities to work with any of the professional guest singers that came through Sarasota?

The principal singers at Sarasota Opera were phenomenal. Forget the “diva/divo” cliché—these were some of the nicest and warmest colleagues one could ask for, despite their incredible résumés of singing at the Metropolitan Opera, Carnegie Hall, Bayerische Staatsoper, and more. Although they were principals, they took the time to get to know us apprentice and studio artists, which created a real feel of collaboration and community amongst everyone in the cast. Each person is important in an opera, whether a main role or small chorus part. This is something I hope to always live by as I move further throughout my career—to treat each member of the company (including stage management, props folks, costumers, etc.) with respect, integrity, and value. 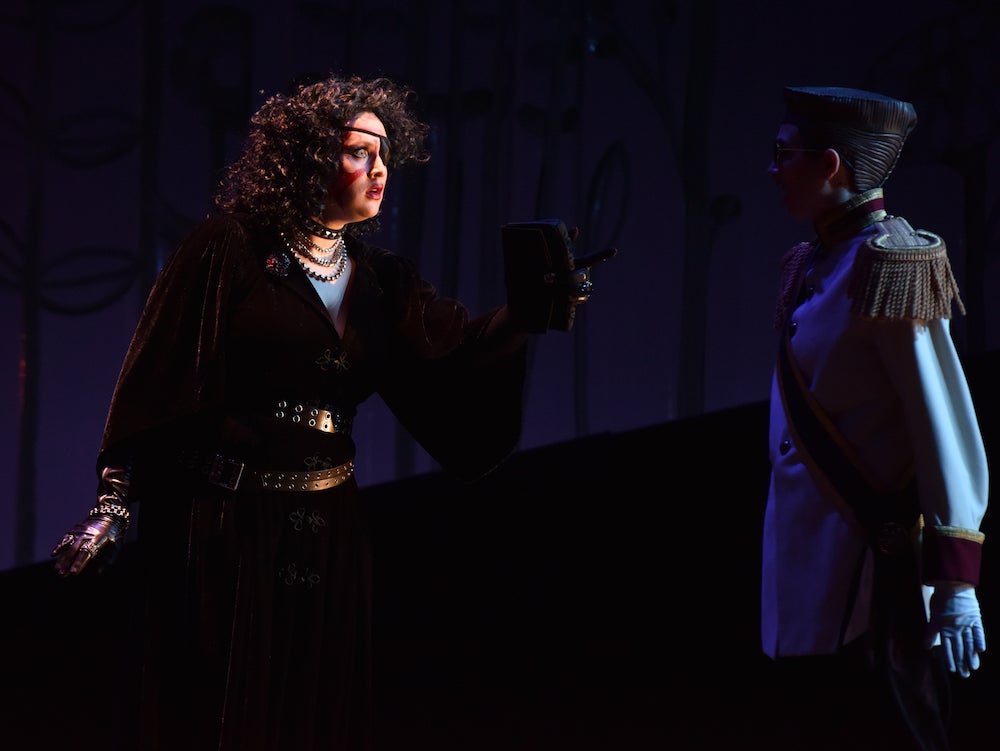 Let’s backtrack to 2015. You had some time off between undergrad and graduate school. What did your semester off look like? How did you stay motivated and continue honing your craft outside of school?

Due to my circumstances as a transfer student, I graduated in December. Before heading to grad school in September 2016, I actually went to work at a Starbucks in Wisconsin (where I’m from) during that time and made a few trips back to Oberlin to study and prepare for grad school auditions with Salvatore Champagne.

While it was enjoyable to get away from the hustle and bustle of Oberlin life for a little while, I think my time off taught me how much I wanted to go back to school and continue singing. The few months away were a good time to focus on what I wanted to accomplish in grad school and the next phase of my life "post-Oberlin.”

I’ll never forget when Mr. Champagne said in studio class once: “Singing should be your bread and butter—you can’t live a day without it. If you can, then this career isn’t for you.” He was right. I couldn’t wait to get back to studying every day and working on my craft.

A lot of Obies have gone on to study at Westminster Choir College for graduate school. I attended Westminster’s CoOPERAtive program (which I highly recommend) while I was an Oberlin student, and I knew it would be a great fit for me to continue my studies.

You walked across Oberlin’s Commencement stage in May 2016. What is one piece of advice you wish you could tell undergrad you? What do you miss most about Oberlin?

I am so thankful for my time at Oberlin. Places like Oberlin and Sarasota are similar in the way that both required the most out of me as a student and an artist. They challenged me, pushed me musically and dramatically, and gave me phenomenal opportunities. I worked really hard during my time at Oberlin, and I was able to be a part of amazing operas, concerts, recitals, and more.

I think one of the best things I learned from Oberlin was how to prepare and be prepared. While I was at Oberlin, I had the chance to sing two operatic leading roles. Taking on Arminda in La Finta Giardinera and Female Chorus in The Rape of Lucretia seemed daunting as a junior and senior in college, but thanks to working with my amazing teacher, opera coaches, director, and conductor, I always felt prepared. Also, having the opportunity to sing with an orchestra as an undergrad was phenomenal. The great base training I received at Oberlin prepared me really well for professional opportunities, such as working with Sarasota Opera. I still bring that kind of preparation into my work today. For example, at Sarasota I had to learn, memorize, coach, stage, and perform a lead role (First Lady in Die Zauberflöte) all within 2-3 weeks! Although music and aural theory were probably my weakest classes at Oberlin, I thank myself for sticking with it and really applying myself in those classes to hone the musical skills I have today. I think I’d remind my undergrad self to keep working hard in those classes—even on the days I didn’t want to be there—as the skills would pay off someday!

I do miss the sense of community that I felt in Oberlin. I met some of my best friends there, and there is no better feeling than doing what you love alongside people that you love.