Michael Rosen calls Cloud-Polyphonies a benchmark piece for percussion ensemble and a landmark of 21st-century music.

He also calls James Wood’s 2011 sextet a “project piece”—because it’s not likely to happen again, at least under Rosen’s watch. “It was such a big deal,” says Rosen, a professor of percussion at Oberlin for an almost inconceivable 47 years. “It was the kind of piece you do once.”

Fortunately, it happened three times—all in the span of one week:  first in the world-premiere performance by the Oberlin Percussion Group on November 4, 2011, followed five days later by a performance at the Percussive Arts Society’s 50th anniversary conference in Indianapolis. 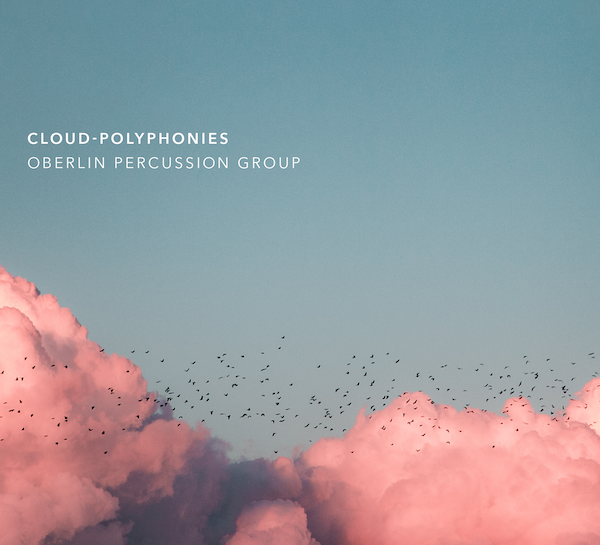 On November 11 and 12 of that year, the same student ensemble, directed by Rosen, laid down the recorded premiere in the conservatory’s Clonick Hall studio. That session has been immortalized on Cloud-Polyphonies, a new recording on the Oberlin Music label , available as a digital download through iTunes/Apple Music, Amazon , and other digital music channels beginning August 7.

Produced by Paul Eachus and engineered by Ryan Miller, Cloud-Polyphonies was recorded utilizing FLAC 5.1 surround-sound technology, which places the listener at the center of the musical maelstrom. The surround-sound version is available on acousticsounds.com .

Wood is a conductor, composer, performer, and instrument maker who has studied with Nadia Boulanger and who conducted the premiere performance of Stockhausen’s Engel-Prozessionen at the Amsterdam Concertgebouw. He writes for a wide variety of genres, routinely incorporating instruments of his own design.

Cloud-Polyphonies was born after Wood and Rosen met as judges at the 2009 Geneva Competition. Rosen initiated a commission on behalf of the conservatory that later grew to include more than a dozen institutions and individuals across North America, including the Yale School of Music, New England Conservatory, Eastman School of Music, and McGill University.

The resulting work, which centers around Wood’s long-held fascination with clouds and the coordinated motion of organisms of all types, unfolds in three movements, each performed with a different set of instruments. The first movement, Starlings, employs marimbas and woodblocks to evoke the titular birds’ migratory gathering—at first a few huddled around telegraph wires, and eventually thousands of them swarming in a sort of synchronized aerial dance.

The second movement, Clouds, recalls a hot-air balloon ride over the English countryside, through which Wood gained an appreciation of the ethereal bodies’ movement as well as their transitions from passive to active—and thus more dangerous—states. It uses numerous metal instruments and prepared piano, which is bowed with nylon string, producing an unmistakably eerie sound.

The final movement, Buffalo, rises from a dull roar on the horizon to cascading waves of sound created by an incredible 66 drums, which together represent the pounding of hooves over constantly changing terrain. The movement also requires the use of simantras—wooden percussive instruments of Eastern Orthodox origin—and bullroarers: reproductions of ancient instruments fashioned using a thick rubber band mounted at the end of a long wooden stick, opposite a grip that resembles that of a handgun. When swung in circles, the instrument emits a sound that can be likened to the rush of winds across a prairie—and which, in some instances, can be heard from miles away.

All told, the ensemble’s six musicians each play 11 calf-skin drums, simantra, bullroarer, wooden-headed drum, and a host of other percussive instruments. Rosen and his students fashioned the six required bullroarers, simantras, and numerous other instruments themselves, with copious input from the composer. Oberlin still owns every instrument required to perform the piece. Not that Rosen will ever try it again.

“I just don’t remember how we did it,” he muses today, more than eight years later. “Maybe it’s conscious forgetting. It takes an hour and a half to set up the pieces and another hour and a half to tear them down. And where do you leave the instruments when you do that?”

Oberlin Music is the official label of Oberlin Conservatory. Its catalog of more than 25 titles is distributed by Naxos of America.