Soprano Kendra Colton has sung the music of John Harbison for some 25 years, including an untold number of performances of the composer’s church and chamber music—as well as Colton’s turn as Daisy Buchanan on the workshop recording of The Great Gatsby, which Harbison composed for the Metropolitan Opera. 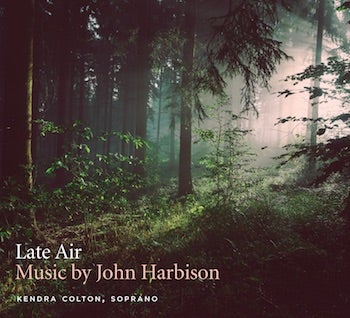 On Late Air, available in February 2020 on Oberlin Music, Colton and Harbison are united once again on music representing three decades of the composer’s creative output.

Late Air opens with Mirabai Songs, the composer’s evocative 1982 work based on poetry of 16th-century India. It recounts the story of a grieving young widow who boldly defies the cruel conventions of her village.

Mirabai Songs is followed by three pieces from After Hours, a sonically diverse selection of songs Harbison describes as typical of his tendency to create work that is spontaneously “written in the margins.”

Also included is North and South, a collection of six jazz-influenced songs based on the poetry of Elizabeth Bishop (one of which is titled Late Air, providing the inspiration for the album’s title).

The recording concludes with the 2012 chamber music piece Crossroads, an Oberlin Conservatory co-commission based on the poetry of Louise Gluck. It was written for Colton—a longtime voice faculty member at Oberlin and a 1983 graduate of the conservatory—and oboist Peggy Pearson, who appears on this recording.

In addition to Pearson, Late Air reunites Colton with a pair of her favorite piano collaborators, Kayo Iwama '83 and Oberlin Conservatory emeritus professor Sanford Margolis. The Oberlin Contemporary Music Ensemble, under the direction of Timothy Weiss, is featured on Crossroads.

“I am thrilled to offer an entire recording devoted to the vocal music of John Harbison,” says Colton, “and I’m so pleased to help share this fantastic repertoire by one of our great living composers.”

Distributed by Naxos of America, Late Air is available through digital music channels worldwide and can be preordered now via amazon.com.