The concept that led to The Oberlin Concertos was initially hatched in a conversation between pianist and educator Xak Bjerken and a former student, Oberlin Conservatory composition professor Jesse Jones. 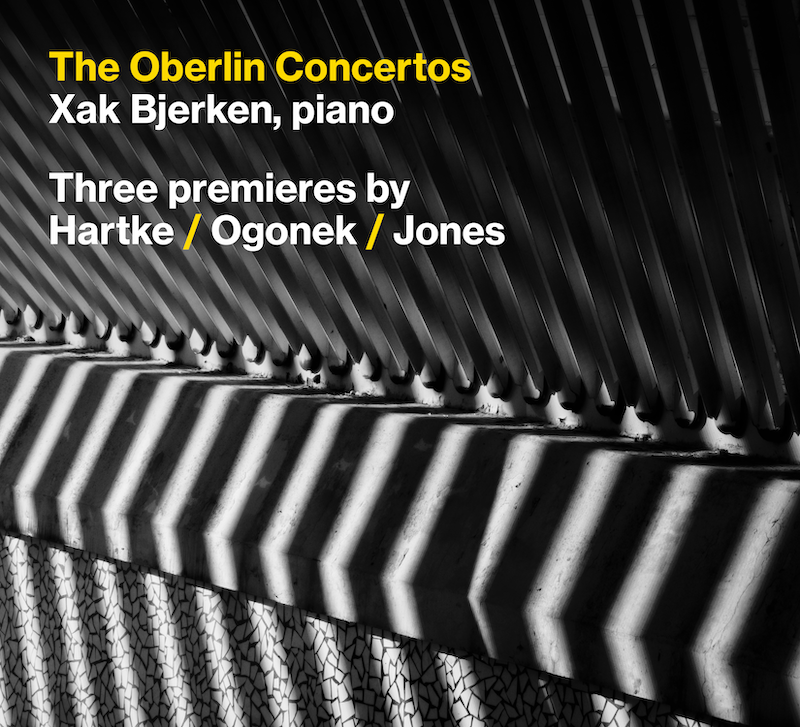 It was Jones who suggested writing a chamber concerto to be premiered by his friend and mentor, and it was Bjerken—a former longtime member of the Los Angeles Piano Quartet and a veteran soloist with the L.A. Philharmonic and other ensembles—who was immediately hooked.

Their plan gave rise to another commission—for the chair of Oberlin’s Composition Department, Grammy Award-winner Stephen Hartke—and then another, for fellow composition faculty member Elizabeth Ogonek. The resulting works were recorded in three sessions over a two-year span, with Bjerken joining forces with Oberlin’s Contemporary Music Ensemble and conductor Timothy Weiss in the conservatory’s Clonick Hall studio, in addition to presenting the world-premiere performance of each piece on campus.

The Oberlin Concertos, the Oberlin Music recording that resulted from their collaborations, is available on CD and digital download beginning September 17, 2021.

“These Oberlin concertos are the result of lucky and close friendships with supremely talented composers, and each of them vibrantly expresses its unique voice,” says Bjerken, a professor of music at Cornell University.

Jones’ creation, PERSONA MECHANICA, Op. 57, for chamber orchestra and solo piano, envisions a piano coming to life in a workshop, gradually rising above its cold mechanical sophistication to conjure an expansive range of human emotions. “The fingertip’s ability to strike and stroke is at the core of the piano’s sound world,” Bjerken once told Jones, “so the composer and pianist must endow the machine with a soul.”

Hartke’s Ship of State, written for piano and 20 players, draws on the poetry of Henry Wadsworth Longfellow in its comparison of a government to a storm-tossed vessel at sea. “Longfellow’s original draft ended with fears of the ship being ‘wrecked upon some treacherous rock’ or ‘rotting in some noisome dock,’" Hartke observes in the recording’s insightful liner notes. "But he thought better of it, changing the final lines to: 'Our hearts, our hopes, our prayers, our tears; Our faith triumphant o’er our fears; Are all with thee, —are all with thee!’”

Ogonek’s where are we now, scored for six male voices, four percussionists, and piano, indulges her love of Medieval and Renaissance music, and includes evocative text written for the piece by British writer and librettist Paul Griffiths. “The use of six voices and percussion came, in part, from an idea to separate the sustaining elements of the piano’s sound from its more percussive qualities and to let those characteristics then take on a life of their own,” Ogonek explains.

The Oberlin Concertos follows the April 2021 Oberlin Music release of another showcase of Oberlin composers and musicians, Hartke | Ogonek | Jones. That recording was released in conjunction with Norman | Trigos | Broening, featuring works by acclaimed composers Andrew Norman, Juan Trigos, and Benjamin Broening. Both recordings highlight performances by the Contemporary Music Ensemble under the direction of Weiss.