For generations, Oberlin Conservatory has earned its reputation as a hub for the creation and performance of new music. A pivotal source of this innovative spark is the conservatory’s own composition faculty, whose wide-ranging works are routinely premiered by Oberlin student ensembles. 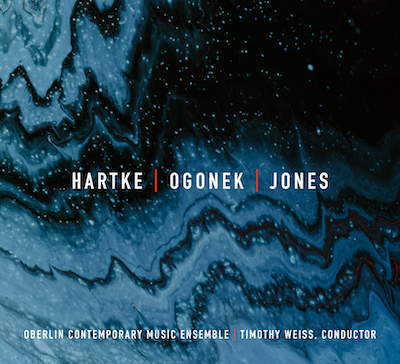 All three works receive their recorded premieres on this digital release.

Composed in 2016, Hartke’s Willow Run is named for the stream that flows near Detroit and the former WWII bomber factory that had the distinction for many years of being the largest enclosed space in the world. Inspired by photos of the structure taken on the eve of its demolition, Hartke’s piece revels in the factory’s vastness and in the bustle of activity that took place there, as well as the relative calm that marked its final days. Woven throughout is the sound of a saxophone, played by 1997 Oberlin alum Noah Getz.

The Water Cantos [notes from quiet places], completed by Ogonek in 2018, recalls locales in New Mexico and Oregon that have fueled the composer’s artistry over the years. It is inspired by the ways in which water resurfaces in Ogonek’s memories of those places. (After serving on the Oberlin composition faculty from 2015 to 2020, Ogonek began a professorship at Cornell University in 2021.)

Jones’ One Bright Morning... (2015) is crafted around an anonymous nonsense rhyme, its fanciful text the launching pad for a sophisticated, polyrhythmic exploration that is as fun as it is unexpected. Featured is soprano soloist Olivia Boen ’17, who presented the North American premiere with the Contemporary Music Ensemble in Chicago in 2016.

Oberlin Music is the official recording label of the Oberlin Conservatory of Music. Oberlin Music titles are available through Apple Music, Spotify, and online retailers everywhere.