Marvin Krislov, the president of Oberlin College, announced today that he has agreed to become president of Pace University in New York City, on August 1, 2017. Mr. Krislov, who has served as Oberlin’s 14th president since 2007, had previously announced he would be leaving Oberlin at the end of the current academic year.

“I have been honored to serve Oberlin, and I have tremendous affection for this great College, Conservatory, and community,” Mr. Krislov said. “Working with our outstanding faculty, staff, students, parents and alumni to further Oberlin’s mission and to honor Oberlin’s values has been the most educational and fulfilling experience of my life. Together we have done so much to strengthen Oberlin. I offer my heartfelt thanks to you all, and I know Oberlin’s next president will build on our efforts. Until the day I depart, I will keep working hard to help create a brilliant future for Oberlin.”

Katie Gravens and Emily Speerbrecher have been appointed to new roles overseeing the college's layered health care strategy in responding to COVID-19.

In fall 2020, the college will launch new software that will be used to communicate and manage connectivity with students. The software platform, Engage, is a communication and relationship management tool that will improve the student experience with academic advising, support student academic success, and make communications between students and the college more efficient and effective. 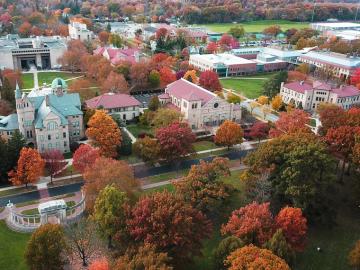 It is hard to believe this will be my final "President’s Desk" column. But in August, I will become president of Pace University in New York. It has been an honor and a privilege to serve as your president.