In a rural stretch of northeast Ohio dotted with vineyards and off-the-beaten-path farms, the wind whips around Kristen Boehnlein as she overlooks a small herd of cattle grazing in the pasture. She’s dressed in jeans, a T-shirt bearing her farm’s logo, and long waterproof boots. She apologizes in advance if her thoughts sound incoherent—she worked a busy overnight shift as a paramedic, and she hasn’t had any rest between that job and morning duties on the farm.

On this day Kristen’s husband, Scott, is busy making deliveries. Most of their eight children, ranging in age from 3 to 20, are tending the farm and retail store. The air is surprisingly crisp and fresh for early August. A short distance ahead, the hogs, coated and cooled in dried mud, and a flock of wooly lambs nearly blend into the landscape.

This is New Creation Farm, a local source for ground beef, deli meat, and pork products served in Oberlin’s dining halls. The Boehnleins guarantee that all of their animals are treated humanely; they’re never given antibiotics or hormones, and their feed never contains GMOs. They back up those claims with routine third-party tests, and they welcome visitors any time, any day to see the farm and ask questions.

What started as a few animals to feed their family and friends has flourished beyond their expectations. About five years ago, as the Boehnleins were expanding into restaurant orders, they began a partnership with Bon Appetit, Oberlin’s food service provider. According to John Klancar, director of culinary operations for Bon Appetit at Oberlin, the commitment started on a small scale with four hogs per month. Now, New Creation is fulfilling orders of six to eight cows and six to eight pigs per month during the academic year. “We make a commitment, and that’s how they raise the animals,” Klancar says. “They never over-raise the animals.”

As foster parents, the Boehnleins started raising their own meats to give their children an appreciation for animals, to provide a bonding experience, and to instill work ethic. However, their mission took on a different purpose after one of their children came down with pneumonia. “She was 2 years old, and it started with the slightest bit of pneumonia,” Kristen says. “She was antibiotic resistant and not responding to any treatment at all. She almost died. In 24 hours, we went from a healthy kid to the doctor telling us she almost didn’t make it.”

At that point, they started doing their research. “We found out that with most meat labeled antibiotic-free, the animals are still given feed with some antibiotic, just not enough to affect the label requirements.” In most cases, she says, they’re still getting trace amounts of antibiotic. “We were already raising the animals without hormones, but that’s when we started looking for feed that’s truly free of antibiotics and GMOs.”

The cows graze on pasture as their main diet, but they receive small quantities of grain— “Scott’s own recipe”—to add richness and enhance the flavor. Beef that’s 100 percent grass-fed is drier and requires a lower cooking temperature; most palettes are simply accustomed the taste of grain-fed beef. To rule out any error of cross-pollination, the Boehnleins have their feed tested by the state agricultural extension at least once a year to make sure it’s free of GMOs, hormones, and antibiotics. Every animal that’s butchered is tested, as well.

The Boehnleins say their family is a testament to the benefits of eating all-natural meats. “Our kids are healthy. We have a pediatrician, but they don’t normally need to see a doctor,” Kristen says. “Ever since we started eating our own meat, we haven’t had to use antibiotics, except for the occasional ear infection. It’s amazing how much healthier we are. If you’re not getting antibiotics in your system all the time, in the event that you get really sick, your body will fight it off on its own.”

Of course, this makes the Boehnleins’ job a little harder. Without antibiotics, they have to keep a constant eye on the animals’ health. Pigs, especially, can get sick and die very quickly. “What it boils down to is, do you want something natural, or do you want something cheaper that could harm your body? We cannot give up the quality of the animal to mass produce,” Kristen says.

And the Boehleins firmly believe—as do their customers and restaurant chefs—that the quality is something you can taste. “Once your kid is in college, they’re really starting to learn on their own what they’re going eat. If Oberlin College and Bon Appetit can educate students to make healthy choices, they’re getting a good start not just for themselves, but for their future families’ health, too.”

For the small population of students remaining on campus this spring, the offering is a welcome reprieve. 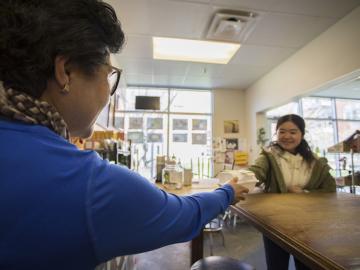 Cooking for a Community 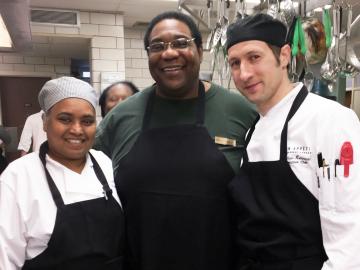 A venture of the Oberlin Project, the Oberlin Food Hub links local farms with wholesale buyers in Northeast Ohio. 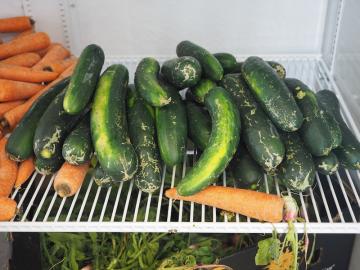