Hispanic studies and politics major Leila Miller ’16 recently transitioned from criminal justice reporter to foreign correspondent at the Los Angeles Times. She recently moved to Mexico City to begin her new position covering the news in Mexico and Latin America.

Miller’s interest in journalism began in high school and continued throughout college. This eventually led her to enroll in Columbia University’s Graduate School of Journalism. After graduating from Columbia, Miller had an internship at the LA Times, followed by a year-long fellowship at PBS’s “Frontline.” She ultimately made her way back to the LA Times for a two-year fellowship in 2018.

Tell us about your new position with the LA Times?

I'm a foreign correspondent for the LA Times. I’m based in Mexico City, but I cover the entirety of Latin America. My job is to write enterprise stories, basically taking a few days, weeks or even months sometimes, to hone in on important stories from the region, whether it’s human rights issues, social issues, cultural issues, or anything that deserves more attention and readers in LA will really care about. That's my new job, and I’m super excited about it. I never thought that I would be a foreign correspondent after three years of working at the Times, but it's something that I've always wanted to do. My mom's family is from Argentina, so I have that connection to Latin America, and I think it’s a region that needs a lot of coverage.

What was your position at the LA Times prior to becoming a foreign correspondent?

I was a criminal justice reporter—part of a team of six reporters. I was a general assignment reporter on that beat, which means I didn't cover any institution in particular. I found my own stories relating to criminal justice, and many of the stories that I've written have involved some kind of accountability component. For example, I’ve written stories about concerns that people have with the prison system, the Sheriff's department, or with the LAPD.

What types of stories did you work on as a criminal justice reporter?

I worked on one story where I spoke to family members of people who were in prisons in California, and they were telling me that they were not being notified that their loved one was being hospitalized with COVID-19. In some cases, families did not find out until days later that their loved ones had been hospitalized for COVID treatment. Some people believe that being in touch and getting encouragement from your family if you're sick with COVID can make a difference. My story featured a prisoner who died from COVID, and how his family was not told about his illness until he had been put on a respirator.

Another impactful story I wrote was about gender identity issues in the California prison system, and how hundreds of inmates have been asking the prisons to transfer them to either a men's facility or a woman's facility under a new law that allows prisoners to be housed based on gender identity. I wrote about the issues of being transgender in prison and how the prison system was dealing with so many requests to transfer.

How has your Oberlin experience impacted your career?

Oberlin has been super important for my career. I think one of the most amazing parts of my time at Oberlin was the Kosher Halal Co-op. I spent four years in that co-op, and I thought it was a really cool place because it broke down barriers. I wouldn't have called it a political space by any means. It was just a space where people from different cultures could come together and make meals and get to know each other. I met my best friends in that co-op. I'm Jewish, I come from a modern Orthodox family, and my best friends were Muslim girls—one from Iraq and the other from Pakistan. I met them there and we're still super close today. As a journalist, you meet different kinds of people, and you need to know how to be sensitive when immersing yourself in different cultures. And I think my experience at the co-op gave me a great base for that. 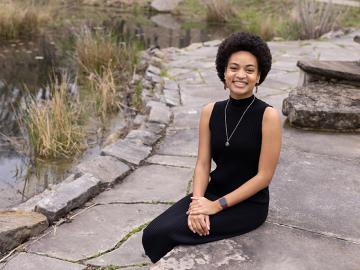