A tour guide leads a group of prospective students and their families between Dascomb and Rice halls and past Warner Center toward Mudd Learning Center. As they walk, they direct their upturned heads right, then left, then right again in an attempt to commit the buildings they are passing into memory. A parent motions to Peters Hall. He’s curious to know when it was built and what it’s used for today. The guide answers and the group moves on.

Students, faculty, staff, and community members are also curious about the buildings on campus, says Anne Cuyler Salsich, associate archivist at the Oberlin College Archives. “Oberlin has an amazingly eclectic architectural heritage. People have an affection for the really old stone structures like Peters Hall and also new structures like the AJ Lewis Center,” she says.

Until last month, archives staff would answer basic questions about campus buildings using an online illustrated guide created by Jonathan Thurn ’03 in 2000 and updated by Caroline Casey ’11 in 2010. But the guide was limited, outdated, and dependent on a department website abandoned by the library in 2012, Salsich says. Archives staff wanted to create a web resource that was more comprehensive and ambitious. And so the idea for the Architecture of Oberlin College electronic exhibit was hatched.

Launched August 3, Architecture of Oberlin College provides historical and current information on every structure and monument that has ever stood on the Oberlin College campus, including projects currently under construction. The website has an alphabetical index of all buildings and monuments, all of which include details about the structure, including the year it was built, the architects and contractors, a brief history, and its location.

Salsich says the website is for anybody interested in Oberlin College structures and is a particularly good starting point for students tasked with researching buildings and monuments for a class. According to Reference and Instruction Librarian Jennifer Starkey, students from three rhetoric classes—two taught by Visiting Assistant Professor Nancy Boutilier and one by Associate Professor Jan Cooper—are using the website to help in writing narratives about Oberlin buildings, for example.

“Students have been impressed and excited by the quality of the site: the high-quality images, the detailed information, and the source citations for further reading,” Starkey says. “This [website] is the place where, if you have a question about Oberlin architecture, you’re probably going to get it answered. You’ll also find links to more resources to take you in deeper,” Salsich says.

The planning of the site started with conversations between Salsich and senior economics and computer science double-major and archives student webmaster Eva Fineberg. “I sat down with Eva and said, ‘We need a way for people to see an alphabetical list of buildings and date ranges for those buildings, and we need an index of architects,’” Salsich says. “Eva said, ‘OK, I got it,’ and she built the templates in Omeka as a winter-term project at home in New York. Without Eva, this really wouldn’t have happened.”

A few alterations to Fineberg’s work after her return to campus in January, and Salsich and the archives staff “got to the fun part”: populating the templates with information and photographs for more than 190 buildings. Salsich, with assistance from Archives and Special Collections Intern Haley Antell, scoured primary sources within the college archives—drawings and blueprints, photographs, dedication booklets, recordings of speeches, and more—to glean important facts about all of the structures. They also turned to a few outside resources, notably the Oberlin Heritage Center website, which is where Salsich says she found rich histories for the college’s nearly 40 village houses.

“The Oberlin Heritage Center inventoried the village houses before they belonged to the college and had done historical research with city directories and tax records to find out who built the houses and who lived there,” Salsich says. “I found a nice history about these houses from these inventories. I didn’t get into every owner [on the Architecture of Oberlin College website], but I highlighted if there were a lot of professors or conservatory people, for example, who lived there—if there was something quirky, something different.”

Images on the website were drawn from the archives’ holdings and the Office of Communications’ photo assets, or are the result of new photography by Salsich, John Seyfried, and archives student assistant and senior comparative literature and composition double-degree student Serena Carey. “I couldn’t find a good picture of the Conservatory Library Addition, and I would guess that’s because it is a really tough building to photograph. John got up on a ladder, shot it, and it’s terrific,” Salsich says.

Aside from the buildings index, Salsich says one of the most exciting website features is the “New Projects” box located on the homepage. The “dynamic part of the website,” box content will change as construction projects on campus change, she says. She also points to the campus maps, which show how the campus was laid out over time, and says a timeline, possibly similar to the one she created in association with the John Frederick Oberlin virtual exhibit, is under development.

“I want to have something so you can see the bumps in the construction on campus. I would assume at Oberlin there would be a valley during the ’80s and ’90s, and then a rise in the 2000s. There’s nothing like a timeline that gives you a snapshot to really understand those peaks and valleys,” she says.

Salsich says the website has attracted approximately 470 unique users since its launch, mainly from Oberlin but also from cities including Austin, Texas; Cambridge, Massachusetts; Chicago; Cleveland; and New York. She says many of these users are archivists at other colleges and universities interested in creating a similar online resource. But they are also architecture enthusiasts excited to learn more about the buildings that surround us.

“There is a representative example of almost every major style in the history of American architecture at Oberlin. Each of Oberlin’s buildings has such a unique story and stylistic heritage.” It’s a heritage she says she is happy to openly share via the Architecture of Oberlin College website.

This Week in Photos: The Faces of Bosworth Hall

A leisurely walk under a breezeway that connects Asia House to Bosworth Hall serves as inspiration for this week’s photo series. 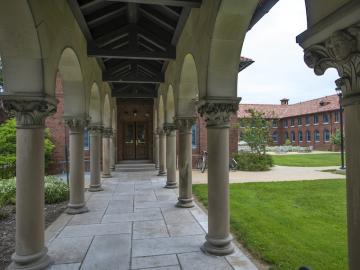 This Week in Photos: Nightscapes

The moon rests on a backdrop of perfect blue over the courtyard outside of Asia House. This picture served as inspiration for this week’s nightscapes photo series. 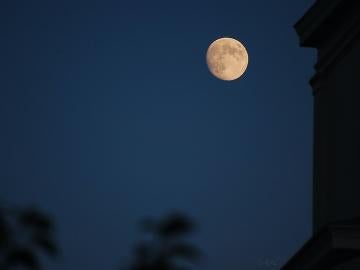 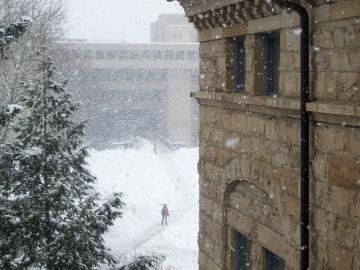