Planned by the Go For Broke National Education Center and funded by a grant from the National Park Service, this professionally designed and interactive exhibit covers events from the attack on Pearl Harbor to the fateful decision to incarcerate Japanese Americans in wartime camps to the postwar fight for redress.

It also brings alive the local stories of communities like Oberlin, Ohio that showed courage and compassion to Japanese Americans who were suspected of disloyalty solely because of their ancestry.

Oberlin was selected as one of the ten cities to host the exhibit because Oberlin College and Conservatory recruited and admitted nearly 40 Japanese American students during the war, city residents defended the students when their presence was questioned, and Nisei (Japanese-American) students here spoke out and organized against racism and wartime discrimination. The exhibit places this story of Oberlin’s response to internment in the broader context of Oberlin’s history of activism and current debates around sanctuary cities and campuses. 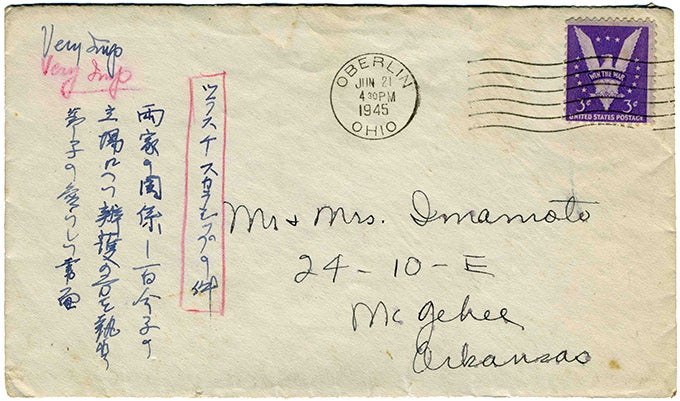 Visitors to “Courage and Compassion” will learn have the opportunity to learn about the history of internment and its legacies for Japanese Americans, to engage with questions about what courage looks like during a time of crisis, and to consider the relevance of this history for today.

During the month-long visit of the “Courage and Compassion” exhibit to Oberlin, the city, college, and conservatory will be hosting a series of events related to the exhibit, including academic lectures, documentary film screenings, and talks by internment survivors.

“Courage and Compassion” is funded in part by the Department of Interior, National Park Service (NPS) through the Japanese American Confinement Sites (JACS) grant program. Go For Broke National Education Center (GFBNEC) is a 501(c)(3) nonprofit foundation that educates the public on the valor of Japanese American veterans of World War II and their contributions to democracy. The exhibit and programming at Oberlin has also been generously supported by the offices of the Dean of the College and the Dean of the Conservatory, the departments of History and Sociology, the Office of Development and Alumni Affairs, the Oberlin College Library, the Office of Communications, Oberlin College Taiko, the Oberlin Heritage Center, and Oberlin Shansi.