“Oberlin taught me many things ... It allowed me to evolve, survive and thrive in ways I never could have imagined on that sunny afternoon thirty-five years ago flinging a Frisbee with Cousin Itt and Jimi Hendrix on Tappan Square.”

My life didn’t work out the way I had planned. I’ve learned lives seldom do.

Attending Oberlin College was an unscheduled event!
I DIDN’T PLAN TO ATTEND OBERLIN COLLEGE. I had a scholarship waiting for me at University of Rochester in Rochester, NY, my hometown, and planned to continue my musical training at the Eastman School of Music. However, integrating my interest in science at the University of Rochester and my classical piano training at the Eastman School proved daunting because the two schools and campuses were independent. Oberlin, on the other hand was within driving distance of my home and the music school was right on campus and intimately linked to the College of Arts and Sciences. So I decided to take a road trip and have a look-see. I visited the campus on a gloriously sunny day. The view of the gleaming white Conservatory of Music across Tappan Square impressed me, as did what I saw on Tappan Square: A shirtless guy with the longest and most unruly mop of hair I had ever seen was running at top speed to catch a Frisbee that had been expertly tossed by another guy who was a dead ringer for Jimi Hendrix. I couldn’t help thinking Jimi Hendrix was playing Frisbee with Cousin Itt from the Addams Family! Cousin Itt must have noticed my interest, because he suddenly yelled out “wanna play?”

There I was looking like a high school kid in my shortish hair and geek-before-it-was-chic clothes, including embarrassingly tall platform shoes and a dress shirt with an enormous collar. I was flabbergasted that the likes of Cousin Itt and Jimi Hendrix wanted to play Frisbee with me. Off came my platform shoes. I rolled up my bellbottomed checkered dress pants and joined the fun. Cousin Itt was a physics major while Jimi Hendrix was a viola performance major in the conservatory. Wow, science was integrating with music right before my eyes via a Frisbee emblazoned with a peace symbol. And best of all: I had been invited to join in. Obviously this was where I belonged. Goodbye University of Rochester; hello Oberlin College!

Becoming a physician was an unscheduled event!
I DIDN’T PLAN TO ATTEND MEDICAL SCHOOL. My interests entering Oberlin centered on plant biology, French and classical piano performance. My Oberlin experience honed my skills in la langue de Moliere via classes and a winter term immersion program in Saint-Georges-de-Beauce, Quebec. Although I may never have become a true Francophone, I continue to be an active Francophile. As for piano, despite my weekly lessons at the conservatory and giving a number of student recitals in Warner Concert Hall, I reluctantly came to the realization that neither Rubinstein nor Horowitz would be dethroned from the stages of the world’s great concert halls by my fearlessly flying fingers. Nonetheless, even today I continue to tickle the ivories at every opportunity.

Oberlin carefully nurtured my interest in science. A recent addition to the chemistry faculty, Dr. Dennis Luck, invited me to become his honors student and work in his laboratory my senior year. (This to me was nearly as shocking as being asked to play Frisbee with Cousin Itt and Jimi Hendrix.) He also encouraged me to consider a career in medicine.

The HIV/AIDS pandemic was an unscheduled (and unimaginable) event!
I DIDN’T PLAN TO BECOME A CLINICAL IMMUNOLOGIST AND HIV SPECIALIST PHYSICIAN. In fact HIV hadn’t even been discovered when I graduated from medical school and headed west ("go west young man!") to pursue an internship and residency in pediatrics. Despite my love of children, their unbridled optimism and their uncanny ability to recover from enormous medical challenges, I did not find general pediatrics intellectually stimulating. Teaching first-time moms about breast feeding, shots and shoes just wasn’t enough for me. Consequently I accepted a postdoctoral fellowship in adult and child clinical immunology and allergy at the University of California San Francisco.

Clinical immunology fascinated me, as it was a highly specialized field of medicine that dealt with bizarre and often catastrophic immune-based illnesses. Intellectual stimulation was no longer a problem! Little did I know the very first cases of what we would eventually come to know as AIDS would arrive on San Francisco’s hospital wards during my training. That an epidemic of immunodeficiency would soon fall upon us like a killer tsunami was beyond any of our worst imaginings. I became an HIV specialist by choice but also by serendipitously being in the right place at exactly the wrong time.

Becoming “virally enhanced” was definitely an unscheduled event!
I DIDN’T PLAN TO EXPERIENCE HIV FROM BOTH SIDES OF THE EXAMINATION TABLE. The virus found me while I was working. In January 1991, while performing a routine procedure on a patient with advanced-stage AIDS, I sustained a hollow-bore needlestick and laceration. Despite taking antiretroviral medication immediately, I seroconverted to HIV positive.

Redirecting my medical career was an unscheduled event!
I DIDN’T PLAN TO RETIRE FROM CLINICAL PRACTICE AT AGE 44. “Positively charged,” I suddenly found my life divided into before and after. I had crossed the line from one who provides care to one who would eventually need care. Having the eyes and mind of an HIV specialist physician but the body and soul of an HIV/AIDS patient provided me with a unique perspective on this modern day plague. HIV/AIDS in January 1991 was a death sentence with a prognosis of perhaps ten years at best. By 1995 my health began to crumble as my immune system deteriorated. I resigned from my large clinical practice as an AIDS specialist and medical director of an oncology-immunology infusion and research center at a large multispecialty medical group. I retained my academic credentials and affiliation with Stanford University Medical Center where as an assistant clinical professor of medicine in the Division of Immunology and Allergy I taught medical students, residents and postdoctoral fellows. I refocused my professional endeavors on teaching and raising awareness of the burgeoning HIV/AIDS pandemic.

Producing Web-based, peer-generated HIV/AIDS awareness via an international Web-video competition and helping victimized Congolese women and young girls were unscheduled events!
I DIDN’T PLAN ON FOUNDING A NON-PROFIT CHARITABLE FOUNDATION. In 1996 Dr. Steven Natterstad and I unknowingly planted the seed for what would become the Robert James Frascino AIDS Foundation when we performed a private HIV/AIDS benefit piano concert in our home in Los Altos, California. The overwhelming success of that initial intimate musical soiree led to the launch of a series of benefit concerts entitled “A Concerted Effort” and ultimately to the formation of the Robert James Frascino AIDS Foundation whose sole mission is to provide crucial services for men, women and children living with HIV/AIDS worldwide and to raise awareness of the HIV/AIDS epidemic through advocacy and education. The foundation to date has raised well over $1,500,000 for global AIDS crucial services, ranging from AIDS hospice care in Los Angeles to support of a clean-needle-exchange program in Washington, DC to the provision of anti-HIV medication to HIV-infected pregnant women in Africa thereby helping to prevent transmission of the virus to their newborns.

The foundation has awarded four grants to Oberlin College for a variety of very successful HIV/AIDS-awareness and prevention projects, including displays of the AIDS Memorial Quilt on campus and the creation and distribution of safer sex kits to first- and second-year students. The most recent grant has culminated in the development of “AIDS4REEL,” a Web-based international video competition whereby students from across the globe create short videos addressing any aspect of HIV/AIDS awareness or prevention. These “mini-movies” will be posted on an Oberlin-hosted Web site. The potential viral marketing of the winners of this project could allow peer-created HIV education to reach millions of vulnerable eyeballs.

The foundation’s most recent project involves a collaborative effort with a generic medicine pharmaceutical company and the non-profit Global Strategies for HIV Prevention to provide treatment for women and girls who have been raped by militia in the Democratic Republic of Congo. Every day, 50 to 75 women and girls are raped in eastern Democratic Republic of Congo. It is estimated that two-thirds of the rapists are infected with HIV. The foundation will help provide medications for the prevention and treatment of HIV, pregnancy and sexually transmitted diseases.

Life is an unscheduled event!
AS IT TURNS OUT I DIDN’T PLAN MOST OF THE TRULY IMPORTANT EVENTS IN MY LIFE. Oberlin taught me many things. One of the most valuable was how to be adaptable to life’s unscheduled events. My liberal arts education at Oberlin was transformative in many ways. It allowed me to evolve, survive and thrive in ways I never could have imagined on that sunny afternoon thirty-five years ago flinging a Frisbee with Cousin Itt and Jimi Hendrix on Tappan Square.

One last unscheduled event!
FINALLY I DIDN’T PLAN ON USING THIS PHOTO. But trust me, it’s way cuter than the one of me standing in front of the Frascino Medical Group and the Robert James Frascino AIDS Foundation offices. I’m the short guy on the left. Steven Natterstad, M.D. is on the right. He’s my life partner of the past 16 years and more recently my legally married spouse. We got hitched on Halloween in a hastily arranged mass ceremony just in time to beat the evil California Proposition 8. The officiant who performed our service was dressed like Mr. Spock in a Star Trek costume. We plan to “live long and prosper.” So far, so good. Our personal motto remains: “Every day above ground is a good day.” We know life, love, illness, opportunity and other unscheduled events will continue. We welcome their challenges. 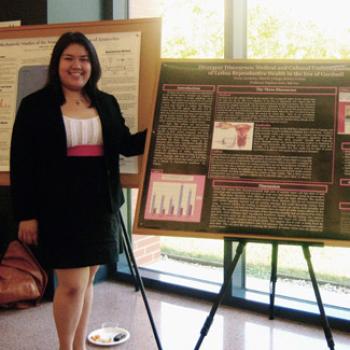 On becoming a scholar activist 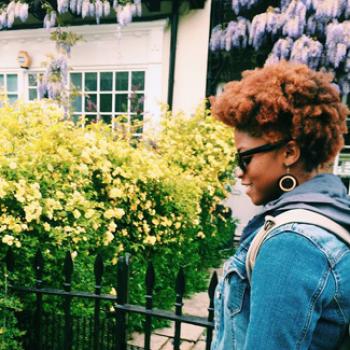 On an unforgettable moment

“Although Kim Katrin Milan did not teach me the politics of radical love, I cannot help but acknowledge that she illuminated what was already so present in my life and the work that I wish to do. ” 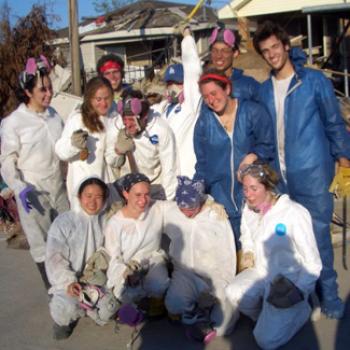