I walk into the first day of journalism class expecting a syllabus and early dismissal. I get the first. But then the instructor, Ferdinand Protzman, a man whose physical presence can be extrapolated with surprising accuracy from his name, tells us to go find news, come back, and write about it.

Tucking a notebook under my arm, I leap from the chair and race down the stairs, out the door, and towards the first newsworthy thing that comes to mind: a new bagel shop that just opened on Main Street. Adrenaline carries me across parks, streets, and parking lots, and I make a mental note to Google Map this route after class and count the distance towards the mileage my cross country coach has me scheduled to run this week.

Before long, I burst into the eatery and demand an interview from the lady behind the counter, who turns out to own the place with her husband. They’re surprisingly friendly, answering all my questions and giving me a tour of the kitchen on the spot. I learn why they named it Beethoven’s, what a “build out” is, and that the bagel-making begins at a time of morning I still consider night. They also offer me a free cup of frozen custard — my first taste of the power of the press! Alas, having become a lacto vegetarian at Oberlin, it’s a strictly metaphorical taste, but I accept the custard nonetheless. It’s definitely worth bringing back for Professor Protzman, in case my article doesn’t turn out so good.

I hustle back to class, cup of melting custard in hand, and dash off four paragraphs as the deadline looms, fighting the temptation to make up facts to fill the holes in my reporting. As the last few classmates-turned-reporters scurry in and time is called, I’m flooded with a new sense of what news is, awed by the realization that journalism is a more democratic endeavor than I’d ever thought.

Two years later, I like to think of myself as a veteran of the art of the interview (then again, I also like to think of myself as muscular). Nearly a dozen tabs mark the pages of a notebook from last January, each designating a conversation I conducted with a source for a long-form article I was writing as my winter term project. My decision to tackle such a story — and the several Pulitzers that await — can be traced back to the shot of insight I got during a September sprint to Beethoven’s Bagels: news is just something out there you can go find and bring to other people.

Back in his own days as a student at Oberlin, Professor Protzman had a politics teacher named Paul Dawson who would hand back papers with comments like “Not completely stupid, but close” splattered across the front. But Professor Dawson’s emphasis on “clear thinking and clean copy,” Protzman once told me, was “in some ways great training to be a journalist.”

The next semester I signed up for a class with Professor Dawson, who still teaches at Oberlin. I showed up and began perspiring immediately. Dawson — referred to by his last name like a football player — surveyed the 50 people in the room with his signature half scowl/half smile. Then he told us our first assignment was to bring the class down to the enrollment limit by proposing a way to get rid of half of us.

Unlike every sport I tried out for in middle school, I managed to survive the cut and went on to get even zanier assignments from Dawson that semester, each one leaving me with a lesson to ponder after I fell for the booby trap he cleverly built into it. The more mistakes you make now, he told us, the fewer you’ll make when you’re in a position of power and it actually matters.

My favorite assignment, however, was fairly straightforward: Find a public problem and do something about it. I didn’t end up solving the printing crisis at Oberlin (though a classmate initiated action that actually led to the Decafe getting better hours), but I did get an epiphany out of the effort: a problem is just something out there you can choose to do something about.

We also practiced negotiating in his class. Everyone would pick a real or imaginary issue and, at some point in the semester, involuntarily urinate a little bit and then get into the ring with Dawson to test out their charm, cognitive agility, and lacrimal glands. Dawson is a no-holds-barred pedagogist; one day he called a student’s mom in the middle of class so that she too could weigh in on the negotiation.

I thought I was done with class phone calls after that, but a couple semesters later I took an electoral politics class with Professor Parkin, who wanted us to practice pitching for campaign money like a candidate would. He left the classroom and went up to his office, I put my cell on speakerphone and dialed his number, and for the next five minutes my classmates listened with bated breath (lots of audible groaning, actually) as I tried to convince Professor Parkin to fund my run for mayor of Oberlin. I almost got a dollar out of him. In the process, I learned a lot about messaging and also that making jokes about his Canadian background is not the best way to get Parkin to loosen the purse strings.

Terrific teaching has been a core element of my Oberlin experience, but it’s just a manifestation of a larger reason my “I love Oberlin” pin is telling the honest truth — the terrific teachers here. When I graduated from high school, I thought the days of personal relationships with teachers who cared about me were over. Well, I’ve only been wrong once in the past 20 years, and that was it.

Outside the classroom, Dawson is famous for his office hours, when he’ll talk you through your problems (or otherwise say, “What do I look like, the department secretary?") and supply you with candy (although he doesn’t eat it himself — “It’ll kill ya..."). President Krislov, who taught a class I took on educational policy and law, has invited me to jump on his “tramp” (that would be the trampoline in his backyard). Professor Sylvia Watanabe once spent most of a Saturday reading and commenting on a short story of mine that had accidentally become a novella.

I’ve labored over poetry lesson plans in the Slow Train Cafe with the infinitely enthusiastic Lynn Powell and feasted on ice cream at her home after my teaching residency at the local middle school ended. I’ve dropped by Jen Bryan’s office unannounced, receiving words of assurance about my latest worry, insight on Le Morte d’Arthur, and life coaching that involved significantly fewer threats of violence than the sort I’m accustomed to receiving from my older brother. (Professor Bryan also doesn’t hold it against you if you accidentally knock over a classmate’s coffee with a Twix bar you might have thrown during a class presentation on “Dover Beach” your freshman year.) I’ve spent hours with Professor Protzman in the attic of the Cox Building (which happens to be his office), carefully going over article drafts. A former reporter for the New York Times, he’d crowd my manuscripts with incisive comments and cross out cute paragraphs I liked too much. There’s nothing like watching a string of words replaced by a single better one under the professor’s pen.

Three years later, I no longer knock over cups of coffee with candy bars (now I’m aiming at entire pots — Oberlin’s taught me to think big), and thanks to the generous mentorship professors have provided, I can look back at the writing I used to produce and either shudder or chuckle. It’s a wonderful thing to be embarrassed by your old work — it means you’ve gotten better. And that’s exactly what I came here for; I think it’s what most Obies migrate to this small Ohio town for every August. Well, that and Oberlin’s wild Greek scene (and by Greek scene, I’m not talking about frats, of which OC has none; I mean Classics Hall, a wing of South where “parties” are thrown [read: tossed gently] in celebration of Aeschylus et al).

I now work on campus as a writing tutor, doing my darnedest to pass on the wisdom I’ve gained in my time here and hoping to undo the damage high school has often done to students’ writing. Trained in the art of peer tutoring by Professor Len Podis, a poodle-loving scholar who exudes more warmth and good humor than a comedian on fire, I attempt not only to adopt his practical strategies (like having the tutee read her work aloud), but also to emulate his empathy, diligence, and undying belief in the value of what undergraduates have to say in their papers — even if there is a comma splice or two in there.

Professor Podis and his colleagues at Oberlin have helped me grow by leaps and bounds as a thinker and a writer. But they’ve helped me grow in even more important ways as well. Having class three times a week with these men and women, who never seem to run out of passion for their vocation or care for their students, makes it hard to avoid becoming a better person yourself. And if you can get that out of college, you chose the right one. 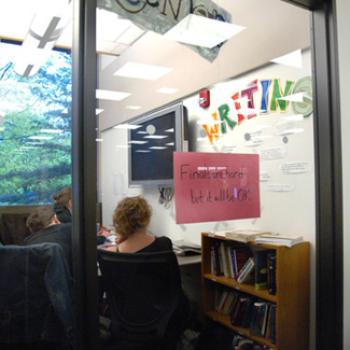 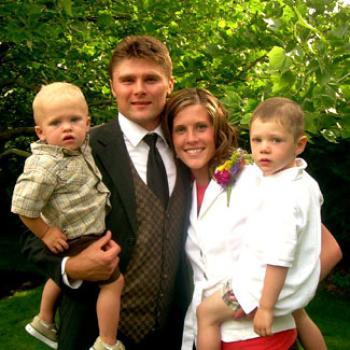 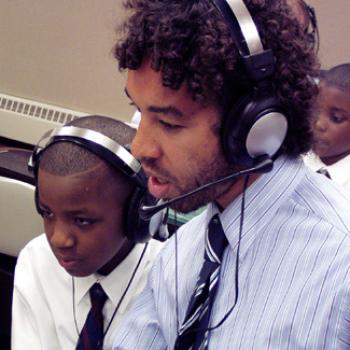