“Walking to and from Wilder in the middle of the night was extremely surreal, and I remember vividly how excited I was to share music with whoever was awake during my “rite-of-passage” first-year show.”

When I was a prospective student, my host told me to stay away from the college radio station, WOBC. She told me it was impossible to attain a show, and once you accomplished this feat, you were destined to confine yourself to a world of pretension, ’80s-style windbreakers, and a computer bogged down with a couple hundred gigabytes of music no one has heard of. Needless to say, I was not about to let one strikingly superficial evaluation of WOBC strangle the dreams I had had of hosting a college radio show since listening to years of college radio in my hometown. Admittedly, the irresistible combination of curiosity and competition drove me to attend the first all-station meeting the September of my first year.

I confess that I was intimidated, but for different reasons than I had anticipated. By talking to some of the DJs around me, I realized that these were not image-obsessed elitists with holier-than-thou tastes in music, despite certain aesthetic patterns. Each station member had a different talent or set of interests to benefit WOBC. Some had special training in contemporary classical music, some had DJ-ed at clubs or at parties, some had graphic arts experience to help with WOBC promotions, some had engineering experience...I could go on for hours. I knew then that I was sitting amongst some of the most dedicated and talented students at Oberlin, all cooperating to maintain the second largest student-run organization on campus.

I could tell it was a competitive environment, but I could respect and understand the source. Who can spin the coolest retro album or the hottest new track first? Who can land the prime time spots? Will you even get your show idea approved? These are prime subjects for contention, if you ask me. The constant struggle to have the best show possible is what makes a radio station tick.

The caliber of quality programming is almost impossible to contest. True: sometimes I turn on the radio and promptly regret the decision based on my own personal tastes (not everyone can listen to three consecutive hours of bluegrass). However, the brilliance of a freeform radio station is that, in its very essence, it’s designed to cater to anyone’s taste.

It is true that most of the music played on WOBC is rather atypical of what is on your typical college radio station. A lot of it is independently released, local, an acquired taste, or simply obscure. For this reason, some students avoid listening to WOBC altogether. However, popular music is not completely ignored on WOBC; it is just approached in a different way. Instead of repeating what the media continuously nails into our eardrums, DJs are conscious to educate the listeners about new bands or albums that may correlate to their respective taste. In addition, programming usually features a diverse conglomeration of talk and public affairs shows, spanning from sports news to sex advice to political discourse, and beyond.

There is always the issue of social perspective. WOBC has become, to many, synonymous with raucous dance parties complete with 40 oz bottles of beer, live bands and DJs, and marathon-type dancing (who knew you could get your groove on for hours while wearing such tight pants?). Sure, I would be remiss to not discuss the hipster stereotype. The fashionable nihilism combined with ersatz retrospective, pseudo-ridiculously ironic clothing turns off a substantial percentage of campus. This in and of itself prevents some from listening.

Despite the fact that my first show was from four to six in the morning on Fridays, I felt by no means disconnected from the station. Walking to and from Wilder in the middle of the night was extremely surreal, and I remember vividly how excited I was to share music with whoever was awake during my “rite-of-passage” first-year show. Each semester, I can’t wait to hear the new programming, and continue to be impressed by the diverse interests and talents on this campus. There is always something going on at WOBC: work groups for each genre, people designing t-shirts, station members hanging out and finding new music together... It’s a community as well as a commodity on campus, and I can only feel increasingly excited to be a part of it.

Needless to say, there are a lot of myths surrounding WOBC. Most are unfair, some are ridiculous, and although a few of the social stereotypes are indeed perpetuated, the station is a warm and welcoming place for people who love music. And what is Oberlin if not that? 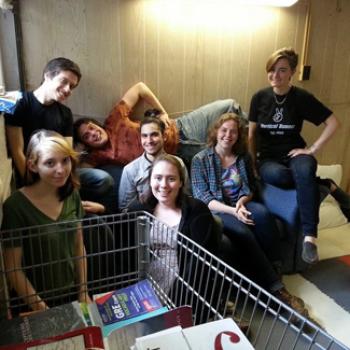 On being part of establishing SWAP, a book cooperative 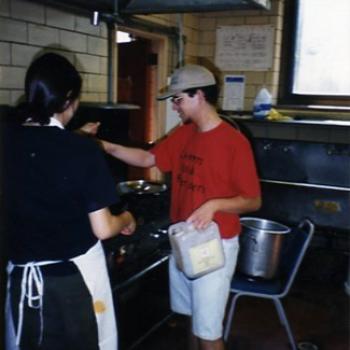 On cooking in a co-op

“I credit my co-op experience with teaching me how to be creative in a pinch, and to make the most of limited resources, not only in the kitchen but in life as a whole.” 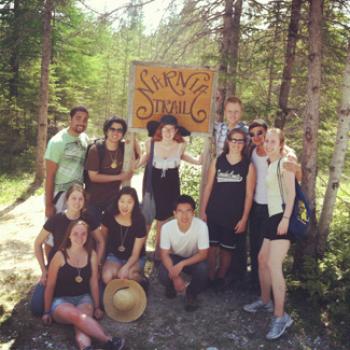