“I always thought I was good at time management, but handling five classes, three plays, two student organizations, an RA job, a radio show, and a social life as an Oberlin sophomore is a little like juggling chainsaws.”

I’ve always been the kind of person to get involved in everything, and I came to Oberlin because I knew I could do that here. My first year I got involved in the Oberlin Musical Theater Association and Oberlin Student Theater Association and took a plethora of classes focusing mostly in Theater (my major) and Computer Science (my minor). I’ve added two more things this year: I’m a Resident Assistant in Fairchild Hall (affectionately called “Fairkid"), and I co-DJ the radio show Twizzlers for Everyone Forever at 4:00 every Saturday morning.

I decided to get involved in four plays the fall semester of my sophomore year. The first, The OC, is an infotainment play performed during first-year orientation by about ten RAs. The other three were a lot closer together and all overlapped. Cat O’ Nine Tales, the fall showcase of student-written plays, went up October 2nd; I got to direct my friend’s play New Nonfiction. I stage managed The Shape of Things, which went up October 9th. I also played the role of Adraste in The Illusion, which was in rehearsals throughout the fall and opened November 20th.

I always thought I was good at time management, but handling five classes, three plays, two student organizations, an RA job, a radio show, and a social life as an Oberlin sophomore is a little like juggling chainsaws. Nevertheless, to this day I can tell you tell you exactly where I was at any given minute between September 27th and October 12th. One weekend in particular stands out.

After two hours of sleep the morning of October 4th, my friend Donnie woke me up at 3:30am to go do our radio show. Between songs we told hilarious stories, and I read from Euripides’s The Bacchae (my prior week’s History of the Western Theater assignment) in funny voices. I got back to bed at 6:30am, woke up at 9am, did some work, went to Little Theater for a run-through for The Shape of Things, then to the second performance of Cat O’ Nine Tales, then back to Little Theater to finish up working on the set and lights for the show. I got back to bed at 4am Sunday. I woke up at 9am, rushed to “combat rehearsal” for The Illusion, a period piece with sword fighting, and right back to Little Theater for another run-through of The Shape of Things. Afterward the crew all went to see Cat O’ Nine Tales, followed by a Decafe snack run and a return to Little Theater to hang lights. At 3:30am, when we realized we’d spent the greater part of the last half hour singing and dancing around, we decided it was time for bed. Five hours later, I got up and ran to my Monday morning class.

That weekend was one of the most hellish and demanding, yet most fun and fulfilling times I’ve had in my whole life. I want a thousand more like it. 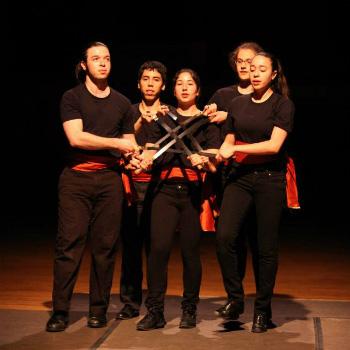 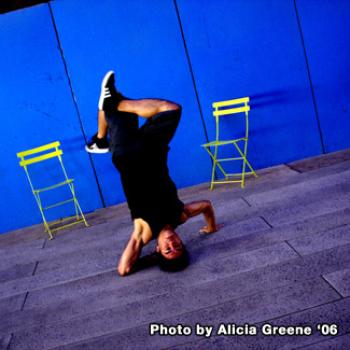 On discovering hip-hip culture at Oberlin

“As I accumulated more knowledge about the music, art, and history of hip-hop through my independent research, I started to think outside the dance.”