The Pokémon Company really isn't shy when it comes to their corporate intentions. Their slogan, "Gotta catch 'em all!" is possibly the most blunt way of telling kids across America to play all the games, collect all the cards, buy all of your favorite Poké-plushies, watch all the episodes, and spend all your time, effort and money on these fictional critters.

And you know what? I'm a sucker. Nintendo has reeled me in and won't let me go, like a Magikarp hooked onto a Super Rod.

I'm obsessed with Pokémon. Always have been, probably always will. Since the humble days of Gameboy Color and the bit-mapped, two-toned Red and Blue Versions, I have spent an embarrassing amount of time exploring the regions of Kanto, Johto, Hoenn and Sinnoh, learning the nuances of every "species" and their in-game applications, and grasping the Pokémon metagame. I guess in terms of Pokémon trainer class vernacular, I would be a PokéFan (Though I always wanted to be a Juggler! They seem to have the most flair, and are certainly cooler than a Cooltrainer).

Now, before I continue, I should probably be totally honest about my heretofore hidden nerdy side... Because it doesn't just involve Pokémon...

However, none of these obsessions come close to the amount of time I have spent on my Pokémon cartridges. I was an avid user of NetBattle, an online battle simulator, and spent numerous hours tweaking my Pokémon, analyzing movesets, and creating fun themed teams. I have played through every generation of Pokémon, from Bulbasaur to Arceus, and intend on downloading an English patch for Pokémon Black and White in a few months. Naturally, I'll be choosing the grass starter Pokémon as always. 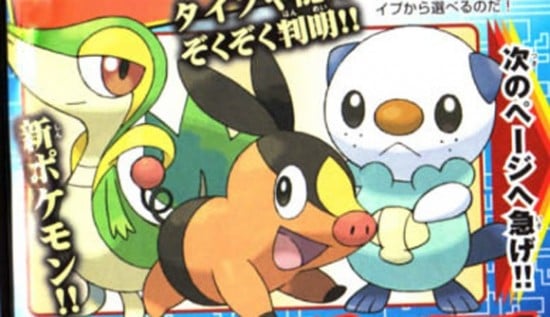 Just look at how smug the one on the left is! A total bad-ass.

So there. I said it. If you didn't know this already, I am a huge, huge geek. A nerd. A dweeb. This whole print-making persona that I've portrayed is all a cover up for what I really am. It's okay if you don't want to read my blog anymore... I understand...

If you haven't been disgustingly disgusted by my disgusting un-disgust for Pokémon, then I have good news for you: I am taking a class at Oberlin College on the Pokémon Trading Card Game. For real.

How does such an absurd topic like the Pokémon TCG become the focus for a class at Oberlin? Allow me to shed light on the beauty that is Oberlin's Experimental College.

Experimental College, or ExCo for short, is a radical program at Oberlin where any student, faculty, or resident of Oberlin is able to teach a class on any subject matter of choice. Topics range from Japanese Cinema to Argentinian Tango, from sexuality to storytelling, from Taiko drumming to Gagalogy (the science of Lady Gaga).

I think you get the picture. ExCos are awesome. And this is all without this last kicker: they can all be taken for credit.

So yeah. Back to my Pokémon class, or its official title, "Pokéco: Master the Pokémon TCG." It's my first ExCo at Oberlin and it is ridiculously cool. And by cool, I mean kinda nerdy. And by kinda, I mean very. When you're in a class in which the instructor (Abby Mansfield, who is dreamily dorky) has the word "derpy" in her vocabulary, you've got to take a hard look at yourself in the mirror and accept your geekiness.

But really, who the hell cares?! Especially at Oberlin, of all places, where LARPers congregate and Sci-Fi Hall expands to cover not just one, but two halls in North.

So what does PokéCo actually entail? For those simply looking to discuss the animé or reminisce about the glory of MissingNo., get the hell out of PokéCo. Just kidding! But, as its name suggests, PokéCo is a class solely focused on the trading card game. You know... those cards that your elementary school teacher used to confiscate before those dangerous SillyBands existed. In case you weren't aware, there was an actual game that you could play with those cards, although most people probably collected them for their cutesy-cute artwork and cuddly creatures.

Assignments include surfing pojo.com for card reviews, researching the nuances of the game, creating a deck and a two-page write-up on our playing strategy. We're even taking a field trip to Sandusky, OH, for a sanctioned pre-release event for the new card set in November! Does that make the class sound any more legitimate? What about if I told you that the class forces us to use mental math and learn the relationships between risks and rewards? Probably not, but it sure does make it more amusing!

I feel bad sneaking this at the end of this heavily Pokémon-related blog, but I am also taking an ExCo on Korean! I haven't taken a language since junior year of high school and Korean is, well, decidedly different from Spanish. Case in point, ExCos are awesome. Even if they aren't the most practical.

On a final note, our first class involved us introducing ourselves and stating our spirit Pokémon. Shellder is more or less my Poké-incarnation. He looks like he's wearing glasses, he's symmetrical, and he's so goofy! And he's a clam!

Karl: Awesome post, and I can only hope my Poke-obsessed son (now 7) ends up as cool as you, and at Oberlin of course... ;)

Just wanted to say "hi" to my "dreamily dorky" niece, Abby. S-o-o this is how you spend your parents' hard-earned tuition dollars ;-)

your blog post is hilarious! but how you forget the orozco children's devotion to pokemon snap?! that saddens me. bring that to class please.

miss you brother! let's eat turkey together next month!

I hope I can sign up for this class. Because I'd love to :D

I SO WANT TO TAKE THIS EXCO! I've been to so many pre-releases and I've been a Poke nerd since I was like 6! This is completely why I love Obie!

You're in the right place Simone.