Yesterday, the temperature broke sixty in Oberlin for (I think) the first time this season. It was beautiful, walking out on my front porch yesterday morning in a t-shirt, barefoot, the sun beginning to peek through the clouds. Although I had a lot on my plate for the day, a few friends and I still found a window of time together right before dinner to go for a bike ride. We rode down to the cemetery southwest of town - a seemingly odd destination, perhaps, to celebrate the sunny afternoon - but it is a great place to visit. 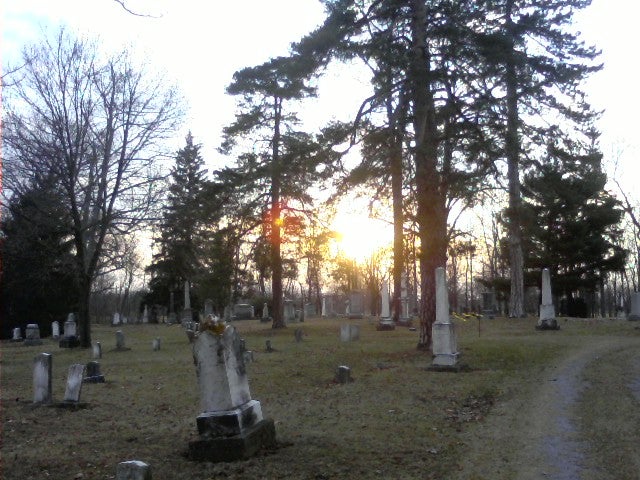 Aside from being a quiet, peaceful escape from the hubbub of campus and downtown Oberlin, it is a stunning display of history. Many of the graves date back to the 1800s, when Oberlin was first settled - in 1833, to be specific. There are a great deal of names on stones that correspond with the names of prominent buildings around campus - Dascomb, Fairchild, Baldwin, Langston, etc. Charles Finney, "the Father of Modern Revivalism" (according to Wikipedia), former Oberlin College president, and namesake of the impressive Finney Chapel on Tappan Square, is also buried there. 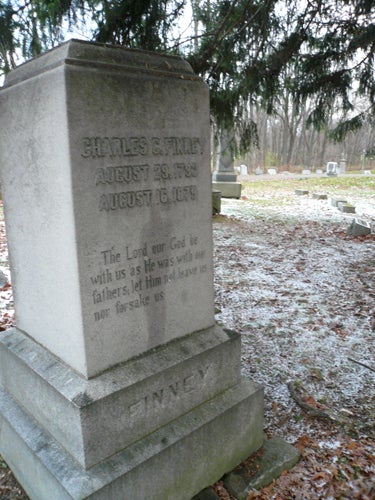 I'm not even a huge history buff, but there's something stirring to the soul about stumbling across an old, crumbling stone and barely being able to make out the engraved letters: Born a slave, died free. When I was in Oberlin for the summer, I went on a kick for several weeks of spending time holed up in the local history and genealogy room in the public library, poring through old Oberlin College and High School yearbooks, devouring documents from the 1800s on the early settlers. Fascinating stuff.

My home suburb back in Kansas has mostly sprung up within the last few decades, so coming out east to a town that is so steeped in historical significance has been a treat. One of my biggest regrets of my college experience was missing out on a class taught here called "Oberlin History as American History" - happily, a couple of my friends on this particular bike trip have taken it and peppered our stroll through the cemetery with knowledge and musings from their class.

Not to mention the sheer enjoyment to be found in the sunshine itself! There is always inexplicable joy in the first few days of spring in Oberlin. Yes, I've heard tell that there is snow in the forecast for next week; the beginning of March is far too early to be so hopeful here, but the feeling in the air both yesterday and today was delightful - all the co-opers sprawled out in the grass out front of Harkness, Fairkid, Old B at mealtimes, optimistic sunbathers lying out in North Quad, people selling cookies on the sidewalk in front of Wilder...like ants emerging from the woodwork, campus comes alive when the sun comes out. 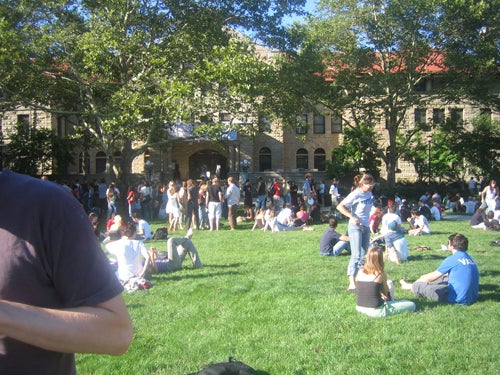 In warmer months, Oberlin has a consistent tradition of TGIF parties - Friday afternoon bashes outdoors where a big chunk of the student body comes out to Wilder Bowl in central campus to celebrate the arrival of the weekend together. DJ's or live bands fill the air with feel-good music, beverages are sold grass-side (to those of age, of course), and there are pick-up games of soccer and frisbee all over the place. If it's early in the month and your Flex points aren't all spent yet, you will find that you are inexorably drawn to treat yourself to a smoothie at DeCafe. The circus folks come out in hordes to juggle, do poi, hoola hoop, walk tightropes strung up between trees, do gymnastics barefoot in the grass. People climb trees, play banjos in them. It's a blast. 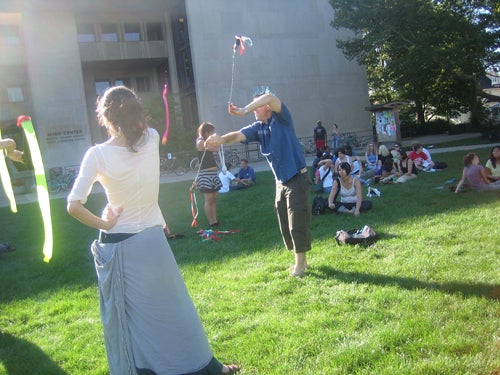 (The above photos are actually from my first TGIF ever - September 2005!)

Where did you find those pictures? Do you have more?

Aries, I got them from my computer! I took them myself freshman year. And yes, I will happily send you a few more from that day sometime this weekend.

I have to agree whole-heartedly about the sunny days and decaf smoothies. I don't quite understand it, but they go together so well that it's almost not an option, but a requirement, to have a decaf smoothie on a sunny friday afternoon.

Lillie, in the event that you're still in touch with comments on outdated entries...answer me this: What's your favorite smoothie combo?

Mine has to be: strawberries, peaches, banana, and tons of blueberries, with half grape juice, half yogurt base. Yum yum yum.