I began this blog a week ago. My class for the day apparently canceled, I found myself experiencing unexpected free time and a particularly cheerful mood. I'd been up since 5:30, but I was sufficiently caffeinated that this posed no problem. It was sunny out, a reliable joy-trigger (I think I'm solar-powered to some degree). I was sitting in a warm, airy room with my laptop. Time to share the fun. 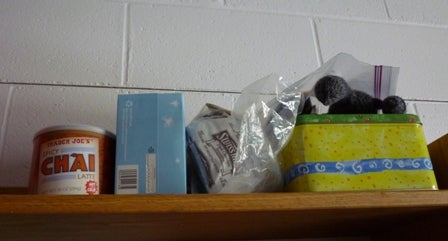 There wasn't a class on the schedule for that day, but on Friday one of the professors had mentioned having works-in-progress presentations on Monday. I turned up at King at 10:30 and tried the door. Both main doors were locked and unresponsive to card-swipes. Rather pleased with this change in circumstances, I walked off into the sunny morning and went downtown. 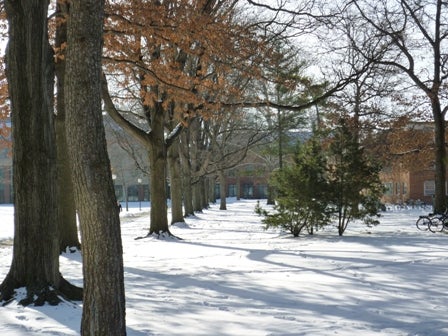 I stopped at Smith's and got some yarn. I've been knitting a hat for my mom, and it's almost finished. However, halfway through the decreases, I ran out of yarn. With this new skein, I will certainly be able to finish--and have quite a bit left over for some other, smaller project. 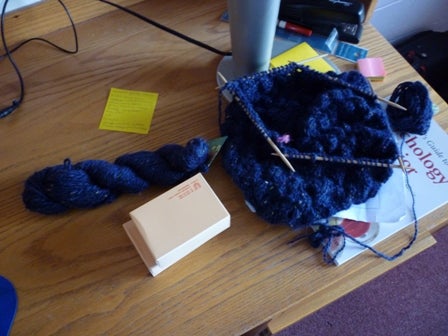 Then I went to Ben Franklin's to pick up some soap. This is Oberlin's "five and dime" store, though you mustn't take that title literally. If you expect everything to be 5-10 cents, you will find it horrendously overpriced. Still, it's usually more reasonable than Gibson's, the iconic Oberlin drug store. Besides, it has Mindfair Books attached, a used bookstore. (On the other hand, Gibson's has fresh bread and pastries and all kinds of house-made candy.)

I went by the Ginko Gallery, but the sign said they're only open on Wednesdays and Saturdays--I guess they have limited hours during Winter Term. So, alas, I did not get to cuddle any kittens that morning.

By now I was rather chilly, so I walked back to Mudd, the main library. It was closed, too, for Martin Luther King Day. Now I had been robbed of the warm, book-filled sanctuary I'd been anticipating. I cast about in thought for another place to work. My room was out. I find it difficult to concentrate in there, sometimes. Besides, I wanted some large, airy place with plenty of sunshine. 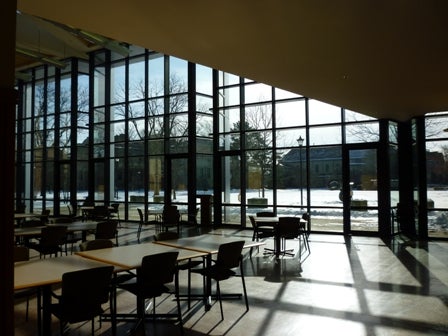 The psychology building was out. Severance, while a beautiful building to look at, is not so pretty inside--it smells dusty and there isn't a whole lot of natural light. It's also cold sometimes, because it was designed as a chemistry laboratory, complete with vents. There's asbestos under the carpets, too. It's quaint, and functional, but not cozy in the way I wanted.

Peters, the language building, has a gorgeous main foyer--the entire main floor is pretty much open, except for the occasional dinner or conference, when they put out tables. I considered sitting on the sweeping staircase and working there. But since King was closed, I wasn't sure if Peters would be open either.

There was Talcott, one of the dorms, that is old and castle-like and apparently has very comfortable lounges for studying in. But again, there was the sunshine factor. I wanted to take advantage of this light while I could!

So I headed for the Science Center atrium. The atrium is lovely--it has two walls of two-story floor-to-ceiling windows and cool vaulted ceilings. It's also definitely warm in here. 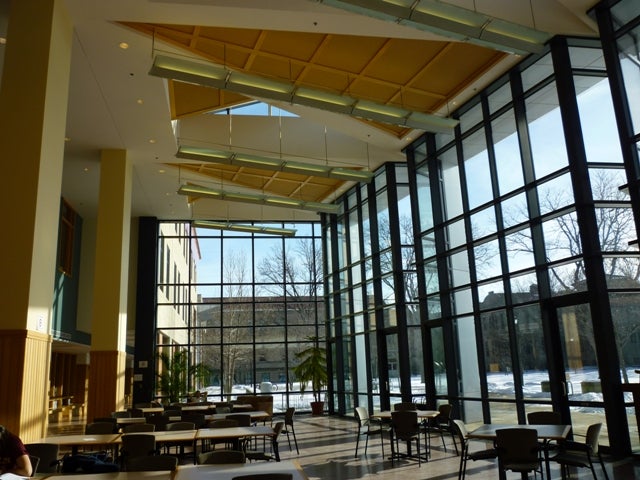 I have an account with Goodreads, a website on which you can keep track of books you've read or want to read. (You can also recommend books to friends on the site, but I haven't gotten into that end of it.) I began to keep a books-read list in a notebook four or five years ago--which turned out to be useful for college applications, by the way--and so I'm continuing that particular list in hard copy. However, I've found Goodreads essential for consolidating my countless index card/sticky note/back of the envelope "to-read" scribbles. Now I can keep track of which books I want to read next.

Most of them are just off-hand recommendations from friends, books I've seen over and over again in bookstores and thought, "Ooh, I should give that a try," or titles gleaned from book recommendation lists like the one I'm about to give you. They range from books on health care and the economy to young adult fantasy to classic sci-fi to The Sun Also Rises to the Bible to analyses of the "adultescent" to exposés of Disney to The Omnivore's Dilemma. Some of them I've been meaning to read for ages. Others, I don't even know for sure where they come from. The to-read lists grows more quickly than the read list, obviously, but I hope to at least try all of these eventually.

But let's get down to business. Here are some books I've read recently that I found interesting.

I really like books that analyze people my age and generational differences. One of these is Generation Me: Why Today's Young Americans Are More Confident, Assertive, Entitled--and More Miserable Than Ever Before, by Jean Twenge. Her thesis is that we're hyper-individualistic and that makes us lonely. A word of warning: Twenge considers herself part of "GenMe," having been born in the eighties, and the book can be read as something of a defense of this generation's tendencies that other generations consider spoiled, lazy, or thoughtless. On the whole, though, I think she has a point. Previous generations have been more collectivistic. Even the Boomers, who made "discovering yourself" a mainstream thing, protested/did drugs/went to Woodstock together, and the whole individualism explosion hit when people were in their teens.

We, their children, have been raised being told that we're all special and unique people and we can do anything. This can lead to absolute arrogance, especially when parents fight teachers over grades (another topic that intrigues me). But it also leads to great acceptance, though that can spill over into apathy or a lack of strong opinions: "I mean, I wouldn't do that, but if it makes you happy, I guess, whatever. Go for it." Finally, it can lead to a terrible amount of pressure. If all you need to do to succeed is believe in yourself and work hard, then if you don't succeed, it's entirely your own fault.

Another book that brings up a similar idea is Bright-Sided by Barbara Ehrenreich of Nickel and Dimed fame. As I told one of my friends over the summer, the idea seems to be that our prevailing cultural ethos used to be "Suck it up and suffer," while now it's "Suck it up and convince yourself you're not suffering." There's a societal dread of being anything but upbeat. Ehrenreich got chewed out on an online cancer support forum for saying she was angry about having cancer. One person told her to "Run, not walk, to get therapy." The rationale for this? Optimism is linked to higher cancer survival rates. Clearly, some people--a large number, it seems--have taken this to mean that if you're not positively delighted about the opportunity to re-assess your priorities that this horrible disease provides you, you're killing yourself.

She also writes about how the idea that wanting something makes you deserve it may have led to the current economic mess. Businesses, religions, and pop culture all contribute to this idea. There's a section on religion that I found absolutely fascinating. Apparently, megachurches do research on what people want from a church. (Apparently, the idea is to bring in as many people as possible, even if there isn't much actual religion left.) What people seem to want is to be told that they're doing fine and can do even better, that they can get anything they want if they want it badly enough. There's nothing intrinsically wrong with being told you're doing okay, especially if we're living in an increasingly pressured and isolated society, but it sounds more like economy-sized group therapy than religion to me. Actually, it sounds more like a pep rally than anything. Ehrenreich mentions how many megachurches are in warehouses or converted stadiums, designed to have the same feel as an office or school, with theater- or stadium-style seats. I don't get it. I thought some of the major points of a church were to create personal relationships and a transcendent, otherworldly atmosphere. I'd rather talk with a good friend, or go to a Gothic cathedral, look at the architecture and stained-glass windows, and tune out a sin-and-hellfire speech, than sit in a giant box in an inescapable, impersonal, music-video-laced pep rally.

But I digress. Ehrenreich's book is about the "happiness industry" as a whole: pseudopsychology, corporate "morale coaches," and want-it-bad-enough religion. It's all rather scary, but I think it's good to know the social messages that are floating around; being aware means you're more likely to catch them in your own thinking.

That said, here's something a bit lighter. Spider Robinson's Callahan Chronicles are a series of humorous sci-fi-ish short stories--and then novels--about the people at a certain bar, both decidedly unusual and profoundly usual. People come in with problems, and the clientele help them out in unexpected ways. In my opinion, the best books are the first two, the earliest short stories, which are also the simplest. Oddly enough, the series jumps the shark when they start saving the world. Clearly, this isn't your usual sci-fi.

The first book is Callahan's Crosstime Saloon. It's a collection of short stories published in a sci-fi magazine in the seventies. Most of the stories include the explicitly fantastic--an android, a telepath, a woman who's lived for three hundred years--but one of the best is not. It's called "The Time Traveller." The man in question has been in prison in a banana republic for ten years. Remember, this was written in the seventies. He came back to a world in which we'd been to the moon, "sit-in" had entered the cultural lexicon, Vietnam had come to a boil and begun to fade, Watergate was breaking. That would disorient anybody. These stories are poignant. They're funny, though, laced through with puns and good humor, and always ending on a hopeful note.

The bar itself changes as the stories go on: the first one gets blown up, the second closed down, the third (so far as I know) is fine, because all the regulars moved to Florida to open it. The later books in which all this shifting of location happens are fun, but highly self-indulgent. They're beach reading: spend time with all-accepting people, indulge in wordplay, save the world. The characters also get more and more "perfectly human" as time goes on--trustworthy, accepting, with nothing but the best flaws--even as they get more diverse species-wise (Ralph von Wauwau is a talking German shepherd and acclaimed author). One word of warning: Spider Robinson is clearly enjoying himself in the writing, whether it's the semi-philosophical musings of the characters or their teasing of each other or their exuberance in watching a shuttle launch. I don't mind watching a writer playing around in fluff like this, but I know it bothers some people, so--you are warned.

I am so incredibly obsessed with that Trader Joe's chai. Like woah. It's my favorite chai drink.

I really love your photographic adventures around campus. I love working in the science center, too. Love Lounge, on the second floor, is nicely isolated from the hustle and bustle of the atrium. You still get the sounds from below but not the tons of people walking by.

Mine too! Although Oregon Chai concentrate is quite delicious as well.