I realize I haven’t written in what appears to be weeks, but I have 4 blog posts in queue that are almost complete and are going to rock your socks off. A preview: Oberlin visitors, student employment, nerdy social media things I hope you find as fun as I do, and a post for us fools. Coming soon, but till then, have some Oberlove gushing in your general direction.

Fact: I would have given a lot of money for my Oberlin acceptance letter to be delivered by owl. Not because I was that amount of obsessed with the world of wizardry (though my crush on Ron Weasley has been in existence since reading the first book when I was in 6th grade, and was only amplified by the casting of Rupert Grint in the films), but because I was not at my house when my letter arrived. The owl would have found me wherever I was, or so I assumed from what I’ve learned from Harry Potter.

I began applying to Oberlin at the beginning of my second year in Hawaii. My family and I spent the first year adjusting to a new place (No winter? Foods that were unpronounceable? New dialects? Beaches everywhere?), which meant we explored the Big Island at the drop of a hat. The second year also marked the beginning of visitors, as friends from past lives started getting in touch when they traveled our way. My weekend of essay writing has been outlined before (short version: I holed up in my house and wrote A LOT till I was happy with what I came up with; I also stress-cooked and made both a pizza and a huge batch of sushi for Ben and myself over the two days of writing frenzy), which only worked because my parents were showing off the island to some relatives.

Maybe it was planned, maybe it was sneaky, but my parents decided that we should begin exploring the other Hawaiian islands during the spring break of my senior year, rather than have a very antsy Ma’ayan sitting around waiting for the mail to come every day. I had received one acceptance letter from a college in the northwest with a nice little scholarship package before we traveled to Maui for a ten-day vacation. I don’t know why I didn’t complain more about not being able to stalk my mailbox for the last week of March, but I guess I didn’t realize it was a possibility.

Somewhere driving around Hana highway, or at the Maui Ocean Center, or at the top of Haleakala, or eating a tasty dinner in Lahaina (who even remembers?), my parents mentioned that I would be receiving my college letters, probably right when we got back. What? WHAT? I WOULD KNOW ABOUT COLLEGE IN A FEW DAYS?! I was officially on pins and needles for the rest of the trip (well, it was partially from that and partially from the fact that I was in process of killing my first camera and it was putting radio static on most of my photos, turning on and off at random, and refusing to zoom).

Upon returning, I dashed to our downstairs neighbors, who had collected our mail during our vacation, and shuffled through all of it to find all the letters with college insignias on them. I don’t even remember size or shape (does that even matter anymore?) of most of the envelopes, because the only one I was looking for was Oberlin’s. I don’t think I told my parents, or anyone else, how much I had wanted this letter, but as soon as I opened it, saw the words involved with “Congratulations!” and “class of 2010” I made up my mind. OBERLIN. YES.

For tiny blast from the internet past, I ruffled through (we need a new phrases for this in the internet age; any ideas?) my old Livejournal posts to see exactly what I had thought about the situation at this time six years ago. Note: this is paraphrased so that my long ago “cool writing without capitalization” doesn’t make y’all think less of me, and I don’t want to name names of other equally cool but not my first love places of higher education on a blog that’s all about Oberlin loveeee.

(I had received three acceptance letters and two waitlists, and I wrote them plus their financial aid packages. It was a nice little encouraging list.)

I haven’t heard from (west coast school) or (another northwest college), but I don’t even care anymore. I’m in! I shall be yet another second generation Obie. :D

There was also a little bouncing mood icon that said “Wheee! Oberlin!”

And then a few days later, I wrote another post, entirely in links, noting that Oberlin had sent me something else.

So, I got this thing in the mail today / Jesse (camp friend who also applied to Oberlin and also got in and ended up coming here), did you get one?

It’s about the size of a 4x6 notecard, about an inch thick / cardboard cover, shrink-wrapped

And you know what? / Oberlin is cool!

Super starched second generation am I!

I had received an Oberlin t-shirt, cleverly wrapped in the shape of a very small book, that was sadly far too large for me. I turned that shirt over to the closest and best Obie in my life, my dad, who still wears it proudly to this day. 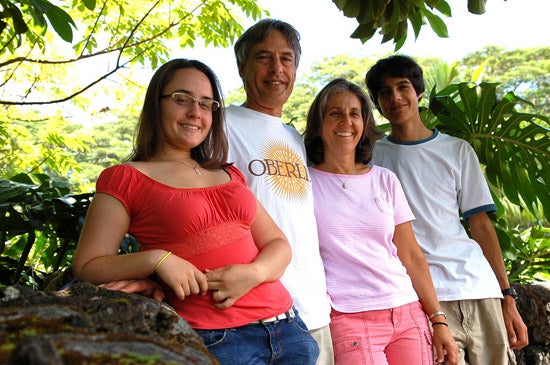 My dad wearing the Oberlin shirt as part of a family portrait on his birthday the summer after my sophomore year.

Upon arriving here, I found that several other small girls had made different plans with their shirts, since they couldn’t wear them as easily; my friend and former housemate Chris made hers into the top of her high school graduation mortarboard (which she pulled out again for graduation this past May), and my friend Rebecca had made a big huggable pillow out of her shirt (which I snoozed on during our 12 hour drive to eastern Massachusetts for Thanksgiving our sophomore year). 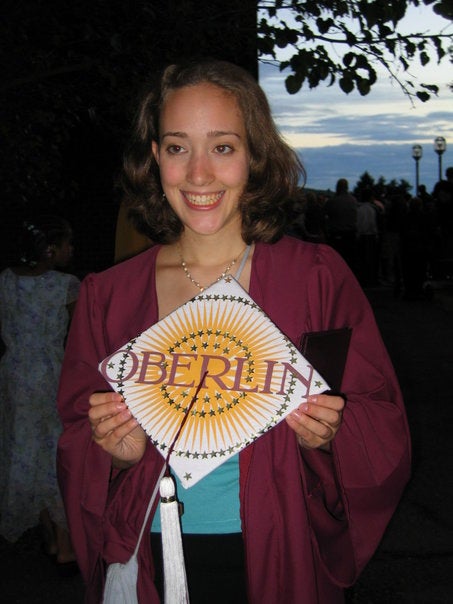 Chris at her high school graduation. This cap had a reappearance for college graduation this past spring. Photo courtesy of Chris Gentes.

I seriously contemplated modifying mine into a prom dress (didn’t, though, since I found a cute knee-length black dress that I’ve worn so many times since). 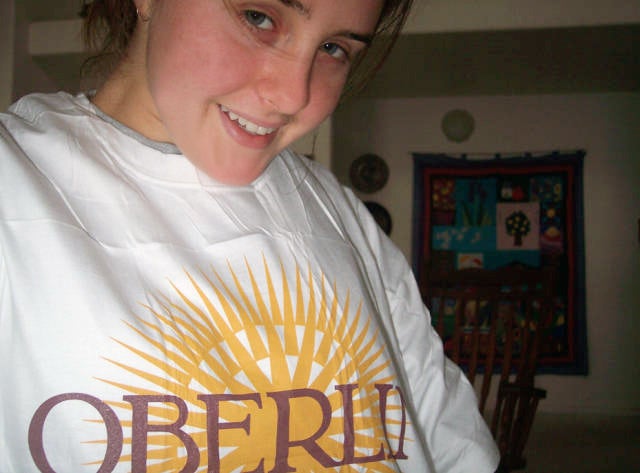 What you can’t see is that this shirt is ridiculously long. I am, in fact, a total youngun of 17 in this photo, and look, I’m already completely psyched about Oberlin!

Letters are coming oh so soon, guys. Don’t be scared, don’t be nervous, don’t worry, and make sure to have some cookies with you to share with the mailman when he brings you the news.

I loved getting my oberlin shirt! I kept mine whole, but ended up tie-dying it during orientation and it has had a place in my pajama line-up ever since. I wore it to sleep last night, actually. It's so cool seeing what everyone has done with there complementary welcome to oberlin tent(shirt)!

Yay! The Oberlin mortar board! I was so lucky my high school's color was also maroon.

I also remember getting the acceptance package. For me, though, the moment when I made my final decision to be an Obie was, after an overnight on campus for All Roads, my parents and I drove to Case Western, where I'd also been accepted and was going to have another overnight. As soon as we got to University Circle in Cleveland, I asked my dad if we could change our flights because I didn't want to go to Case Western anymore. I had made my mind up.
We drove straight to the airport, changed our reservations, and I wore my Oberlin sweatshirt all the way home.

In other news, I decided to go back through my old Livejournal account as well. I made a huge deal for my first acceptance letter (University of Rochester), but the only mention of my Oberlin letter was:

Later, I have a full entry dedicated to my prospie trip, where I mention that (a) we saw an albino squirrel, (b) I learned Tchaikovsky was gay, and (c) I went to a student folk concert at the Cat where I saw someone (who I later found out was Mark Wessels) playing saw!

Ma'ayan! I gave my Oberlin shirt to my dad too! (Though he did not go to Oberlin), he tells me he gets comments on it whenever he wears it, people wondering when he graduated from Oberlin. It tickles me!

@Ellen - I remember this! I also tie-dyed a shirt that weekend, and I think it later ended up house-job-cleaning shirt for the entirety of my living in Harkness.

@Chris - Similar thing happened to Ben, remember? He stayed with us in Slapdash house for four days and considered going to Case, but the timing wasn't right (lucky for us :P), and inevitably, it was Oberlin all the way for him, too.

Your visit memories are so totally Oberlin. That would be my hope for anyone who visits here.

Funny, I did not remember where that shirt came from.

BTW I usually wear it when I am flying so that I might meet fellow Obies.

Anyways, I, too, always wear Oberlin apparel when I travel, because I always meet people along the way that want to talk. We must be related or something :P

I made my overlarge Oberlin t-shirt into a smaller, cuter, more fitted shirt with the aid of scissors and a book. It laced up the sides and was totally adorable and I wore it all the time. Except then I must have thrown it in with my colored laundry at some point? Weird, unattractive spots appeared all over it and I had to stop wearing it. Now I have absolutely no idea where it is. I'm kind of sad about that.

That photo of Chris is the loveliest thing ever.

@Carolyn - I totally forgot that you're awesome at tshirt mods! Maybe you should teach me some of your skillz...