June 2015, surrounded by love and Obies galore, I knew that it was just about time. Ben started mentioning in passing a few years back that I'll know when it's the right time, but I kept on pushing it off, saying, "No, no, I'll never want to leave this place; I love it so."

But he was right. (Ben is always right.) It nagged at me, then hit me, and then it crushed me: it was time.

I won't go into arduous detail about the past eighteen months, but it happened somewhat slowly, then not at all, then all at once. Where should I go? What should I do? Who will I work with on these new things if not my wonderful coworkers in the communications office? 550 days fraught with existential crisis after existential crisis, finding myself, losing myself, sending hundreds of emails (including a 100 days project inspired by a similar project by Molly McLeod, consisting of a philosophical question about change and transition sent to a mailing list of friends), calling and Skyping dozens of people here and abroad, two dead computer hard drives, several cross-country and cross-ocean trips, and in between, around, and alongside all of this, hours and hours and hours of... podcasts.

Podcasts kept my mind quiet, busy, occupied, happy, contemplative, for months of inner turmoil and reflection. I looked for any excuse to go outside and walk, where I could singularly focus on listening, glorious listening. Also, let's be real: I thought this was a productive form of procrastination while working on my future. Oh, you silly, silly Ma'ayan you. Just look at where your productive procrastination of blogging led you. Moral: listen to where your mind is drifting, it might know something you don't.

This should not have been a surprise. Countless Oberlin people have found solace in listening to podcasts and so, so many of our alumni have defined this medium as a creative outlet in the past decade (ever play the Oberlin iTunes chart game, in which you count the Oberlin connections in the top 50 podcasts on iTunes? My check while writing this surfaced 13 shows that were created by Oberlin alums and/or have at least one Oberlin person on staff at the moment). For every episode of Pop Culture Happy Hour, StartUp, and 99% Invisible I heard on my daily meanders, I was slowly realizing that their interests preceded my own confirmation that yes, I, too, could find room to grow, challenge, and change this industry (and myself at the same time). I could see myself contributing positively to this world that had embraced so many Obies before me, and everything I had learned at Oberlin as a student and as a staff member was going to help me get there.

There were fits and starts. I firmly believed I could be a producer. (Turns out: while I'm detail oriented, the nitty-gritty editing process doesn't jazz me as much as talking to people or being on mic.) Then I thought I could be an editor. (Yes, this is backward from the world of film. As I learned from editor Julia Barton '91, in the world of audio, producers make the thing and editors shape the thing. Also, I'm still pretty sure I could be an editor, since I've been an visual and written editor since 2008, so I'm putting a pin in this for later.) I also thought I could do all these things by myself. (I'm a great independent worker, but when it comes to sustaining creative work over time, I can't do that stuff alone.)

I like to think that I'm good at all the things that surround content production. Making things from scratch is fun and I can do it, but I'm an even happier camper when I get to build from the things others have created already. I'm a dot-connector, a strategist, an enthusiastic celebrator of "You made this? AWESOME! Let's make sure others know that, too." All of that? It wasn't something I'd seen anywhere in the audio world yet, but ohhhh did I want to.

In late spring 2016, two storylines started working in parallel: one of my own and one of a company.

On my walk to work at the end of the spring semester (if I recall correctly, it was while listening to Megan Tan's "Millennial is joining Radiotopia!" episode, in which I audibly cheered - much to the amusement of my neighbors, I'm sure - for a young person making it to where she wanted to be by doing the thing she wanted to do) I clearly saw an entire project appear before my very eyes. I scribbled it down as soon as I got to my desk: 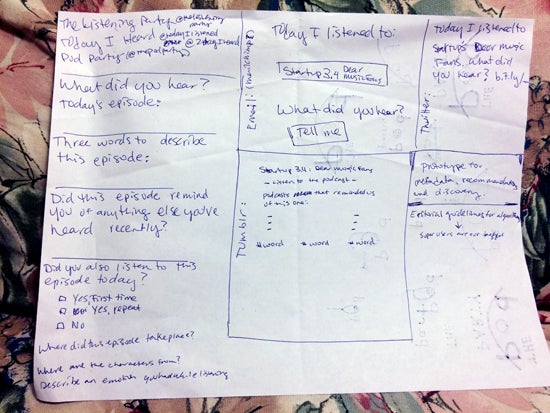 Notes and things. It was almost identical to what ended up happening. You'll see some faint sketches of logos on the back, which turned into:

Within 48 hours of outlining this project (which quickly became known as The Pod Party), a new public benefit corporation called RadioPublic was announced to the world. I, as I'm sure many others did, too, shared my vision of what radio and podcasts could be and submitted that vision as a general application inquiry. And then I waited. But as I had learned earlier in the year, I couldn't just wait.

I wish I could say that I found the front door, knocked, and I was invited in. Definitely not. This is a magnificent and heroic story, my friends, and "Please come in and join us" is Too Easy.

Since I didn't see what I wanted in the world - finding excellent listening, connecting it to more listening, and talking about the things we heard - I decided to make it myself. There is no waiting for your future. Your future is coming for you, whether you want it to or not, and I'd rather be ready when it arrives. As May led into June, The Pod Party went from paper to full-on pilot project. I wanted to listen with other people and I wanted to find more things that I liked and I wanted to talk about what I was hearing. Each day for two weeks, a group of people received a recommended episode via email, we'd all listen, then we'd brainstorm metadata and related podcasts or episodes that related to what we'd listened to each day, which I would then publish to a blog.

It was fun. More than fun, actually. It was nice to listen and know that someone else out there in the world was listening to the same thing as me, and once we were done, we could talk about it. By the end of the fortnight, I had dozens and dozens more things to listen to, a community of people beyond my immediately available podcast nerds to turn to for recommendations, and even more importantly, I realized that I really, really, really liked the curation and the down and dirty detailed planning of this project more than anything else. When the project wrapped up, I did the thing I usually do: write up a reflection of what happened and what I would adjust for next time, and on a whim, I decided to send it along to a few places and people to see if anyone would be willing to talk about it with me so that I could improve the project in a productive way.

And then the next morning I left for Connecticut. Or rather, I left for central New York to pick up my brother in order to drive across the state to a birthday party of a near and dear mutual friend, accompanied along the way with season one of Serial, which neither of us had heard yet.

Less than a day into my arrival on the eastern seaboard, I had an email back from one of the folks I shared my project with: Julie Shapiro, executive producer for Radiotopia, offering up a sheer fount of insider audio knowledge and an open invitation to answer any followup questions I may have. Questions? Oh, did I have questions! I honed them down into a short list, ending with "So, these RadioPublic people? I think they're thinking like me..."

Two weeks later, I found myself devoting my free time to the world of RadioPublic as their Podcast Librarian, recommending, researching, and curating podcasts and episodes for the in-development listening app and for new and long-time podcast listeners. Six weeks later, I found myself thanking Julie in person for helping me make this connection as we mingled with Radiotopia producers at the annual Topefest at the Podcast Garage. And now, seven months after the spawn of The Pod Party, five months since the start of this cascade of serendipitous circumstances, and one month following the launch of the RadioPublic app, I'm following the inevitable sound. I have to know how this story ends. It is time.

There's a niche of podcast I've been searching for hungrily for months now, that which explores the pivotal moment. It's one of the hardest to capture since hindsight is 20/20 and you don't necessarily know you're in it till it's over, but those little moments are the ones I've been in for months now. One in particular that I'm painfully, soulfully, religiously listening to is a personal exploration of emotional health called Terrible, Thanks For Asking. A recent episode discussed the ways you prepare yourself for the last time something happens, and usually, you don't realize it's a last time until it's already past. I've been existing since last June in a state of perpetual last times...? (which, let me tell you, is no way to live). There's no life if all you're doing is waiting for an end.

And, as I am realizing, there is also no end, but change. I'm continuing to work with Oberlin (and Oberlin-like) people. Oberlin is my home base for the time being, but in another manifestation of resident: no longer a student, no longer a staffer, as a townie. And, of course, I'm an Oberlin alum, and no one can ever take that from me. All in all, my relationships are changing, not ending.

When I exit my office and my first professional work experience tomorrow, I'm not leaving it behind. I'm taking it all with me.

My high school yearbook quote was from the incomparable J.R.R. Tolkien: "It's the journey, not the arrival, that matters." I'll amend this slightly, to address how my life has gone and will probably continue to go: there is no singular journey, rather, journeys, and if and when they converge, that's an opportunity for a new route. Who knows where I'm going - I've got an idea for now, at least - but I'll know when I get there.