I had a truly wonderful fall break. And all because I learned the following nugget of information: Oberlin's Outings Club sponsors camping excursions during the fall and spring breaks. For a fee (usually under $100) a student can voyage with a small group to some corner of American wilderness to camp, hike, canoe, and/or climb. The Outings Club provides students with camping gear, a car, gas and food money, and loose advice on how to survive in The Wild for a week.

This is a great option for those (like me) who didn't really want to go home or stay in Oberlin for fall break, and other options would have been too expensive. I'm not a super outdoorsy person, but the idea of turning off my cell phone for five-plus days sounded super-appealing after a rough midterms week. And I was ready for some beautiful nature.

And oh dang was it gorgeous out there. My group of six went to the Red River Gorge in Daniel Boone National Forest where we planned to backpack along a few trails. This meant abandoning our car and carrying absolutely everything - food, tents, clothes, camping gear - on our backs. It was a liberating feeling, knowing that everything I needed to survive in that environment, I could carry on my back. But also it was very heavy. When I first put on my pack at the mouth of our first trail, once I got over the staggering weight, I felt such a sense of freedom. No more tests, papers, or deadlines to worry about, my cell phone was locked in our abandoned car, and the delicious sights and smells of trees and rock formations were mine to explore. 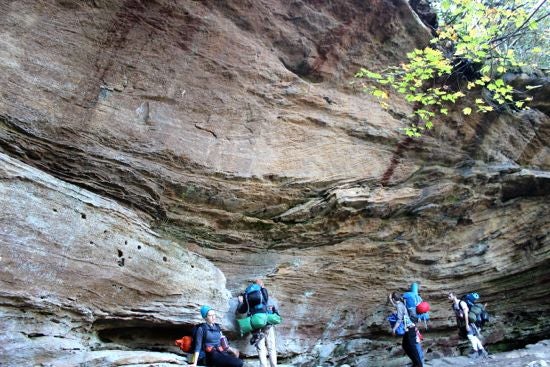 Our massive backpacks and a beautiful rock formation. Photo courtesy of Maya Moscowitz.

The most important thing about outings club trips, we learned, is to be flexible. We were all fresh-faced urban-dwelling college students, few of us experienced nature-voyagers, which meant there was bound to be some change of plans. The first night we camped, we didn't have gas for our stove and it was raining, which mean we had pumpkin pies and lukewarm hot dogs for dinner. Our second night in the wilderness we shared a campsite with a still-ripe skunk carcass. And we lost a headlamp after an intense duel with a tree, trying to hang our food out of reach from bears. These were just mild deviations from "the plan" with few consequences other than causing mild discomfort (only with the skunk, really) and much amusement.

We also had more of a major plan change. On our third morning of camping, one of our group suddenly became very faint and nearly passed out, which meant a trip out of the forest and into the nearest hospital forty minutes away. Fortunately, everything was okay; turned out she overexerted herself and was dehydrated, so we ended up staying the next two nights in a motel so she could rest. Obviously this was unexpected, but we proved ourselves adaptable, driving back to the gorge during the day to go on shorter hikes and stinking up the hotel room with our sweaty, dirty bodies during the evenings at the Quality Inn. Most importantly, everyone was healthy, and we had the added luxury of an evening shower.

One of my favorite things about our trip was the van and the times we spent inside it. Oh the sweet, sweet minivan: her seats were soft and spacious, her bass was bumpin' and the car keys could open the doors from across the parking lot. The drive to Kentucky was about seven hours, which wasn't bad at all and meant we could listen to the entire Kanye West discography (except for 808s and Heartbreak, for obvious reasons). Ohio is a lovely state, but I enjoyed watching the scenery change through the window as we passed into Kentucky. Especially hills. We don't have a lot of those here in Ohio, and seeing them covered in fall foliage was spectacular. 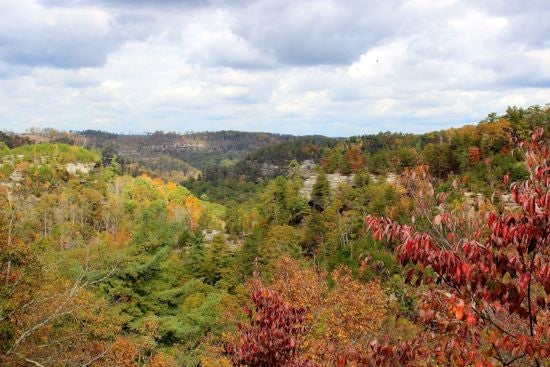 Seriously look at these trees!! Courtesy of Maya Moscowitz.

On the ride back my group leader Maya spotted a magical billboard off the highway that read "Grandpa's Cheese Barn - next exit" so obviously we went. After a long tiring trip, there was nothing we needed more than gourmet cheese and smoked meats. I bought a block of black truffle cheddar, which I said I would share with other people, but then obviously I ate it all by myself. Totally not wilderness-related, but still a highlight of the trip.

This coming spring break, or any break after that, I heartily recommend spending it with the Outings Club. If you absolutely do not like the outdoors, I would say this is not the trip for you, but if you are looking to escape the collegiate universe for a week, want to meet some cool new people, or wish to explore your sense of adventure, I say do it! 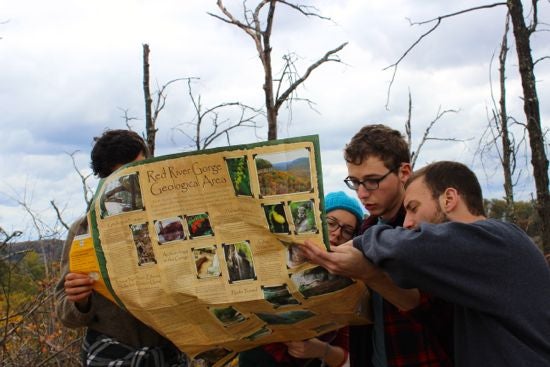 Just a group of explorers caught in the act! Again, credz to Maya Moscowitz.