An Oberlin education has afforded me so many unique opportunities and experiences during my undergraduate years that it is hard for me to imagine how I will fare in the "real world" come graduation. In between incredible free concerts, a world-famous art museum, lectures by distinguished speakers, and a slew of other daily events to get involved with both the college and the community, even after three and a half years it feels like there's so much left for me to learn. Compare that with the current state of world affairs, and you can see what I'm getting at. As a senior, the realization of graduating is made all the more unappealing by the woefully bleak economic depression and the knowledge that I (along with over 600 other graduates) will be poised to enter such a job market next May. Even if Oberlin is sometimes described as a "bubble," I'm not in any hurry to venture too far outside its wonderful crystalline sphere.

But even in times like these, I can't afford to be a downer. As Oberlin students, we are resilient, feisty, never satisfied, and capable of conquering the insurmountable. Even if in this case those hurdles include unemployment, nationwide panic, and a global crisis. But somehow in spite of all of this, there is good news in a place I thought I'd least expect to find it--a plan after graduation! It is fitting that even in my last semester here at Oberlin, I am fortunate enough to be taking advantage of one more opportunity that this school has offered--one that is wholly unique to graduates of Oberlin. For two years, I will be teaching English in the northern Chinese province of Taigu through the Oberlin Shansi two-year fellowship program. 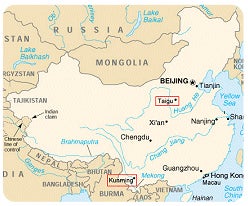 A map of China from the Shansi website. My site is Taigu, located southwest of Beijing.

But before I get too far into that, let me back up just a bit. Oberlin Shansi, though not terribly well known among underclassmen, is an outstanding organization on campus. Not only is it one of the oldest educational exchange institutions in the U.S., but it's also one of the distinguishing features of the Oberlin campus. After all, you have to either be currently enrolled or graduated from Oberlin to take advantage of it. Its mission is to promote understanding and communication between Asians and Americans through educational programs and community projects. These manifest themselves most notably for students through $1500 In-Asia study grants, awarded annually to Oberlin students for projects in Asia during either winter term or the summer, and two-year fellowships to teach English in China, India, Indonesia, and Japan after graduation. They also sponsor Asian faculty to do research and teach at Oberlin, give scholarships for student scholarly work related to Asia, and offer travel grants to expose Oberlin professors to Asia. Notice a trend here? According to the Shansi website, "the aim of these endeavors is to make constructive and useful contributions to Asian and American institutions, programs, and communities," largely through cross-cultural learning and understanding.

With that said, all of this is still very new to me. Like most seniors, up until a few weeks ago, I had no idea what I wanted to do after graduation. ...Well, that's not completely true. I knew I wanted to travel. I knew that I wanted to spend at least a year doing something outside of the country--whether that involved joining the Peace Corps, researching my tri-continental familial roots through the Watson fellowship, teaching English in Japan through the JET programme, or plain taking a backpacking trip through Eastern Europe--I would go somewhere, do something, write about it, and be content even after selling out and settling into a corporate cubicle, that at least I had this small part of my life to show for myself. But why Shansi? Interesting you ask. Oberlin Shansi, seemingly unbeknownst to me, combined a number of my greatest interests and passions.

The first was an overwhelming desire to get in touch with my Chinese heritage. I have studied Japanese for two years in high school and three at Oberlin, and have even studied abroad in Japan. Though my Chinese family would never say it and despite the fact that I often joke about being a "traitor" to my own heritage, I know that deep-down they, as well as I, would really like for me to experience and study the language of the country of my cultural ancestors. This year I began taking Chinese and have so far fallen in love with it. Though the air may be bad (and in fact, quite hazardous), the people poor, and the sanitation...well, suffice it to say, I am really excited to finally visit China and get a glimpse of what it means to live in a small agricultural city.

The second is the incredible relevance the fellowship has to my long-term career plans. Even though I like to pride myself on not having a "plan" (or at least that plans are overrated), I know I'm doing a surprisingly bad job at conveying that. Some friends at school have called me an "opportunist" and I am not prepared to deny that claim. In fact, I try to get my hands in as many things as are available, mostly for the fun of it, but also because I'm never sure what will be that one It that will truly speak to me. As a writer, amassing a store of fascinating and varied experiences (or knowing people with said experiences) is almost as important as being able to communicate them. In China, not only will I have the opportunity to write during my free time, but also get a chance to broaden my world-view and have some eye-opening experiences. But the fellowship goes beyond even that. I am intensely interested in the realm of international journalism, as well as travel writing, and this opportunity gives me the chance to pursue them both, and see whether or not either would be feasible for a "real world" career.

But really, I have no idea what I'll be doing in the long term. Or even the short term for that matter. Which brings me back to China. Though I'm super-psyched to be doing this next year, I don't have a clear impression of what exactly it entails. Here's what I do know: I will be teaching English to undergraduate students at Shanxi Agricultural University. Since there isn't a lot of direct supervision, I'll be able to create my own lesson plans and interact with students outside of the class. I'm expected to teach about 12-14 hours a week which leaves a lot of time for outside activities, including travel and other interests, like cooking, calligraphy, and volunteering with NGOs. I will be living in a walled apartment complex on the university campus with three other Fellows, two who will be starting their second year, and another who will just be beginning. In the summer prior to departure, Shansi will provide me with tuition and room and board for an intensive Chinese language program as well as reimbursement for continued language study while in China. Shansi also provides international airfare, health insurance, a stipend to cover housing and cost of living expenses, student loan deferments, and (best of all) annual $1500 In-Asia travel grants to visit other Fellows and countries in Asia. Over Winter Term, I'll be spending the month of January taking a Teaching English to Speakers of Other Languages (TESOL) training course at Oberlin that will hopefully allay some of the anxieties I have about the whole experience.

I must say that at this juncture, celebrating and not worrying about figuring out my life next semester has been worthwhile enough for me, even if it hasn't been the greatest motivator for getting any of my work done in my classes. You can read more about me and the ten other Oberlin students and graduates who were awarded the fellowship here.

Daniel! Omedetou! I really want to learn Chinese as well. Good luck with teaching... I want to go to China some day. I'm glad you're making it happen :)

Ahh this is my favorite entry ever - wonderfully written, really honest. You make me proud!

Even every city has their merits, I have to say Shansi is among the worst cities, especially pollution-wise. :( Your parents probably told you so already.
But still! WELCOME TO CHINA! If you could manage to cling to this land for two years, I'm sure here you could explore more adventure than you expect.

Daniel this is a wonderful post! I am sure you will find Taigu quite special - even though the conditions may be harsh in the winter - remember the in-Asia grant will offer opportunities to travel to warmer climes during the spring festival break! I look forward to working with you over the next two years! (and to future blog posts on your experiences in China)
Deb Cocco, Shansi Associate Director

Hello ! I have been asked by the Foreign Affairs office to consider coming to SAC for the Fall Term 2010 to teach English. I spent a year in Jinzhong, near Taiyuan, so know what the weather is like in both summer and winter.

I would like your honest assestment of the campus atmosphere, foreign teacher housing, how the staff of Foreign Affairs are to work with, as well as classroom situations, class sizes, and so on.

Thank you for your assistance.

Oberlin has a rich alumni network both within and outside the country.