I've become the butt of many jokes amongst my friends at Oberlin. It's becoming increasingly easier to poke fun at me, whether it's for my odd facial quirks or my weird SFX that I use to break silences. For one, I apparently make excessive use of the word "hey." I didn't even think that was possible, but I guess I do say "hey" quite a lot and in a funny matter. Second, I apologize for anything and everything. I don't know why, but it is a weird habit that I've always been guilty of. (For example, yesterday I asked a classmate if he had gotten a haircut recently. He said no, and I immediately said "sorry." He told me that there's no need to say sorry, and I agreed while apologizing for that apology.) Another incident that caused lots of chatter throughout my floor was the discovery of an old YouTube video consisting of two friends and me performing a choreographed dance to *NSYNC's "Bye, Bye, Bye." Now everyone can blackmail me with this. Hurray!

More recently, I have been jokingly/ironically associated with the word "rugged." For those of you unfamiliar with the English language, rugged is:

•(of a man's face or looks) having attractively strong, rough-hewn features
•having or requiring toughness and determination

Back-story: Last week, some friends and I got very bored and began talking about how I wanted to have my own plum-scented cologne line. Thus, we came up with the name of my cologne line, "Rugged." The humorous part about it is that I am really the polar opposite of rugged. I don't climb trees, I lack substantial upper body strength, and I don't like beef jerky. More often, I am associated with the words "androgynous" and "artsy" (I don't take too much offense to either, really). Anyway, the joke stuck and we spent a few hours producing a mock photo-shoot of me in some gray jeans, Timberlands, and a wife-beater throughout the bathrooms, hallways, kitchens of Barrows Hall. Some sample photos are provided here. I could easily provide you guys with a link to the entire album, but I'll let you find the rest of the set for yourself. I hope you're all squirming in disappointment. 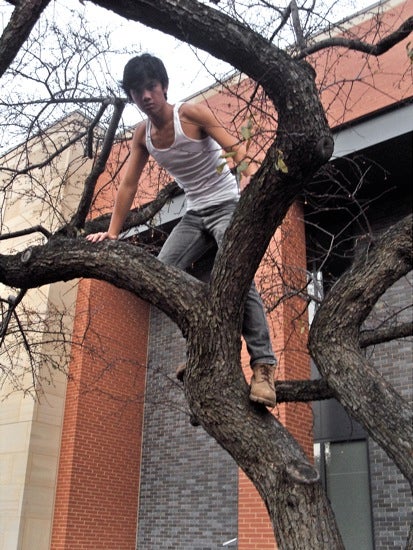 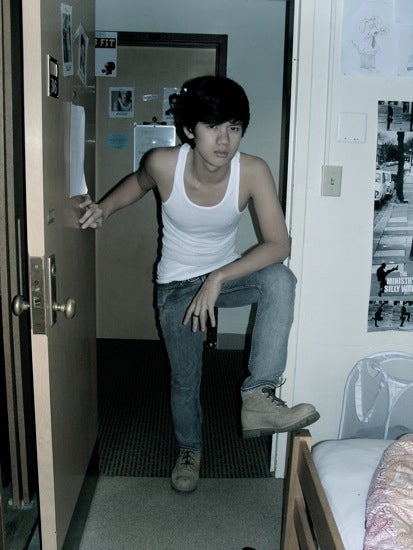 I can hear you giggling and I'm not happy about that.

As Halloween approached, I was nominated by my RA Ted and a couple other supporters of my "Rugged" campaign to dress up as the Hulk. I was slopped in green Crayola finger-paint and the transformation began. I present to you, The Incredibly Skinny Hulk:

Naturally, lots of other Barrows residents dressed up in costume and a large variety of outfits were on display. Given my obsession with lists and outlines, I have decided to organize the costumes into the different routes people decided to follow:

2.You can use Halloween as an excuse to dress up snazzy and showcase your sexiness. Yum!

3.You can be a celebrity or artist that you already look like.

4.You can make something awesome out of otherwise ordinary household items. Here is Lizzie adorning a wonderfully made snail costume out of numerous gray clothing articles, saran wrap, and sleeping bag. Impressive!

I'll admit that I have yet to skip out on an opportunity to go trick-or-treating. Sadly, my search for candy this year was not the most rewarding. When the house to pieces of candy ratio is less than 1:1, it's a little disappointing. In addition, my skimpy costume made the 45 degree weather nigh unbearable. Even with a leather jacket, it was still uncomfortably numbing. Even further, the green finger paint started to peel after an hour and I began looking more like a leper than The Hulk. Note to self: Next Halloween, I will pay attention to the weather forecast before deciding my costume. Also, finger paint does not equal body paint.

After 30 minutes of unsuccessful trick-or-treating, we headed down to Gibson's and invested some money (and saved some time) into bags and bags of yummy, cavity-inducing candy: Clark Bars, Reese's, candy corn, Snickers, Mike & Ike's, Sour Patch, Tootsie Pops, M&M's and then some!

The night concluded with 12 or so of us gobbling candy in the 3rd floor lounge while listening to Bob Dylan, substituting the words to "Like a Rolling Stone" with "Like a Toblerone." Quintessential Oberlin moment? I think so.

This blog is ridiculously good. Like... they're all good, Karl. Really. But I laughed out loud like 6 different times.

soorrryyy! And I think it's wonderful (though unnecessary) that you're sorry for being over-apologetic.

FINGERPAINT=BODY PAINT. DO YOU WANT TO DIE FROM CARCINOGENS? I DIDN'T THINK SO.

Great blog! Lot's of fun, and who ever said that the hulk had to be big and scary?

It was so hard to read this blog because I kept being distracted by watching bye bye bye over and over and over...

This is one of my favorite blog posts ever. Your photos made me laugh out loud.

Also, you freshmen have such ridiculous costumes. Loveeee it.

Another great blog young grasshopper. and there was no mention of how you lost!

I love this! I love you.

Plus-- It's sweet how often you say sorry! Don't apologize. haaa. just kidding.