I'm not sure how DIS (the program I'm on) can afford an apartment fit for a king in the center of Copenhagen, but luckily for me they can and I'm allowed to live there. My two roommates are nice and I have a Danish "SRA" who lives with us and is a generally fun guy to be around. He's very patient and helpful when it comes to helping us navigate the ins and outs of Danish society and definitely eased the transition a lot to life in a foreign country. 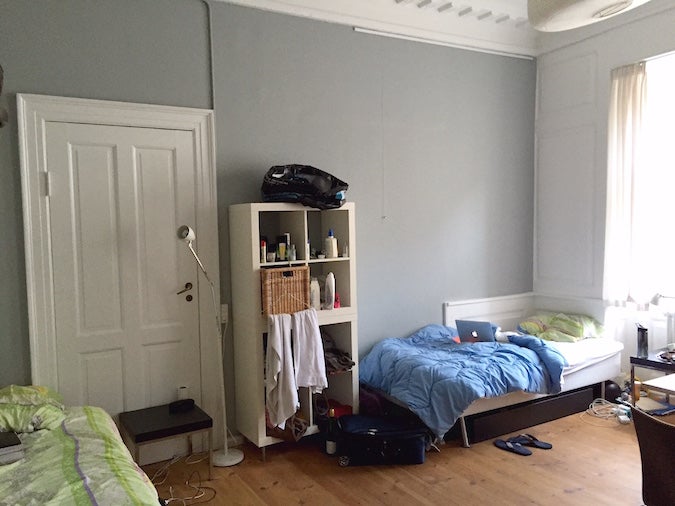 I live in the culinary "living and learning community," or LLC, which is a theme house of sorts (think Oberlin's program's housing, but with more required programming). Every Wednesday we have a house event where we learn something about Danish food, and usually cook some too. One of the first weeks, we had a chef from a local Danish bakery come in and teach us how to make "Flødeboller," a traditional Danish confection consisting of a wafer with merengue dipped in chocolate. He brought all the supplies and walked us through making them, step by step. The week before, we had a competition for which floor could make the best smørrebrød, the signature Danish open-faced sandwich. My group came in a distant last place, but it was a fun day nonetheless.

Even apart from the formal culinary programs, living in the house has its other perks. For one, I live 30 seconds from my classes (many people living in other dorms have to commute up to an hour every morning from all around the sprawling city), and I live in the most central part of central Copenhagen, so getting around to tourist attractions, like the Round Tower or the main shopping street "Stroget," is almost too easy. I'm positive that I'll never be able to live so centrally in a city again in my life, so I'm trying to soak up the experience as much as possible when I still can. 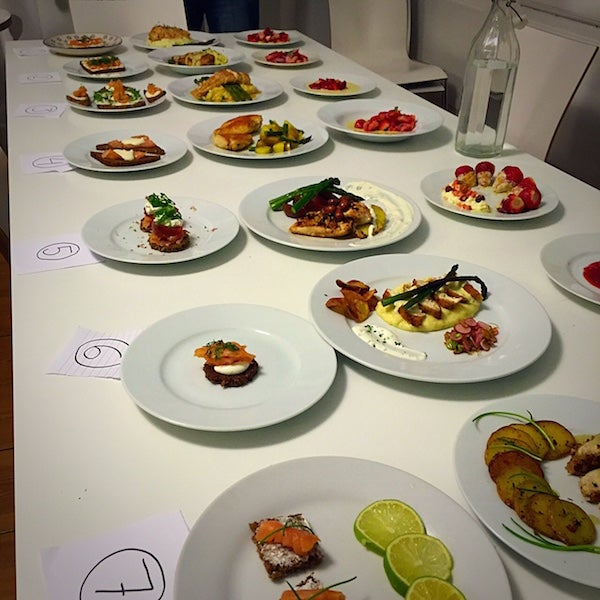 Living in the culinary LLC means I get to eat a lot of food like this.

After narrowing my abroad search down to a few different programs in several European cities, I chose to study at DIS (the Danish Institute for Study Abroad) when flipping through their course catalog. What I liked most about the program was the flexibility of the course scheduling; while you take one "core course" in a subject of your choice, which designates what program you are in, the rest of your three to four courses are electives chosen from an extremely extensive catalog. I'm in the public health program, and my other classes are Epidemiology in Denmark, Masculinities in Scandinavia, and Gender and Sexuality in Scandinavia. The latter two I am taking to fulfill my gender, sexuality, and feminist studies minor, and luckily for me, since DIS is an "affiliated" program with Oberlin, it's super easy to transfer credit back for those classes.

The greatest part about abroad classes is applying the theoretical things I learn in classes at Oberlin to a real-life society other than the United States. Studying familiar subjects as they relate to an unfamiliar society is a great way to contextualize what I've learned in my classes at Oberlin and at DIS.

Having only ever been to Israel and, well, America in my life, I knew that I wanted to study in Europe so that I could cross borders easily and explore the continent as much as possible while abroad. By the end of the semester I will have been to eleven countries and more than ten major European cities:

I went to Estonia and Finland with my core course for the first travel break, which was really nice because it felt like an all-expense-paid trip for a week courtesy of DIS (though it is really an all-expense paid trip by your tuition bill, but it's easy to forget that). On our core course week, we did lots of things I would never have thought of doing on my own, including having a medieval dinner in Estonia and then curling the next day (it's harder than it looks). 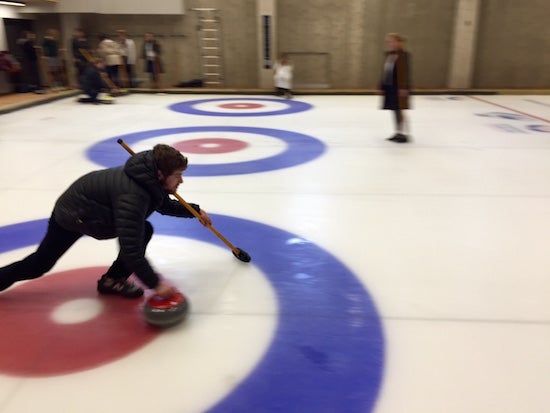 Me attempting to curl in Estonia.

The week was also filled with a lot of academic visits to doctors and other healthcare providers, where we learned about the healthcare systems of the respective countries in order to compare and contrast them to what we had learned about the Danish healthcare system in class. In Estonia, one of my favorite visits was to a sexual health clinic in Tallinn, where we learned about how the country's Soviet past influences its democratic present with regards to provisioning healthcare. In Finland, my favorite visit was to Folkhälsan, which provides various social services to the Swedish-speaking minority of Finland. One of the presenters works to expose how gender norms are rampant in preschools, and proposes ways that this can be ameliorated, which I found really interesting.

In addition to academic visits, we were also treated to numerous "cultural visits" everywhere we went. From visiting countless museums to melting in a Finnish smoke sauna, these made it feel like we were really experiencing the places we visited--not just passively learning about them.

4.The Myth and Reality of Culture Shock

Any time you move to a completely foreign place, things are going to feel different. Even when I first came to Oberlin, it took me a little while to get used to the Birkenstocks and impassioned political and social discourse that defined the campus. Surprisingly, though, my transition to Europe was pretty smooth and relatively culture-shock-free thanks to the fact that virtually all Danes speak English and dress like hipsters--two things I am used to as an American-born Oberlin student. 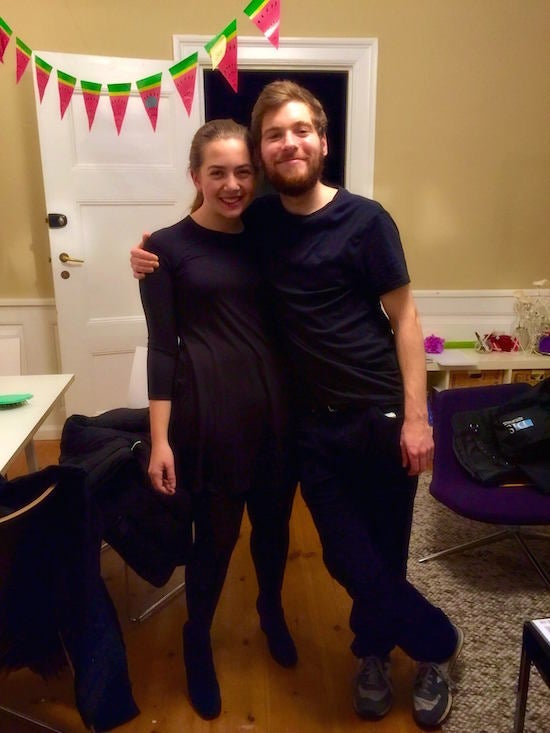 Danes are exceedingly hip, so it's not uncommon to see people dressed in all black from head to toe. Being a huge fan of brightly colored flannels, this took some getting used to. Here's a picture of me and my friend Dara looking as Danish as ever.

At first, it was hard to tell which things were cultural differences and which were a result of my program. Do Danes not use paper towels or is our dorm just not supplied with them? Do all bathrooms have heated floors or is that just a result of our super-luxurious housing situation? In both of these cases, it was the latter. Still, there were certain things, such as scheduling an appointment with a doctor or taking public transportation for the first time, that I needed my SRA to help me with.

In the early hours of February 15, while I was inside playing a board game with friends, there was a shooting at a synagogue on the street directly next to mine. A wild gunman approached a guard outside of a young girl's bat-mitzvah and shot him. The first targeted shooting since 1987, the event shook up the country and effectively stopped it in its tracks.

Danish police handled the situation extremely well, and caught the perpetrator--who was unaffiliated with any larger terrorist group--later that night. While everyone was suitably sad the next day, the Danes seemed much more concerned about a future attack than any of the Americans did. Perhaps because these tragedies happen in America much more frequently (unfortunately, things like school shootings happen all too often), the Americans were less disturbed than the Danes. If one person were killed in America, it would hardly be a shock to the entire country as the shooting was in Denmark.

It was beautiful to see how the Danes banded together after such a senseless act of violence. The day after the shooting, the entire street outside the synagogue was lined with thousands of bouquets of flowers and lit candles, outnumbered only by the enormous crowd of people watching in silence. The attack was an important reminder that while structural anti-semitism is all but eradicated in most parts of the world, anti-semitism still exists in other forms. One particularly poignant sign in the memorial encouraged people to temporarily ignore religious divisions and stand strong, together: "I am a Jew, I am a Muslim, I am a Christian, I am a Dane. I will not let fear rule." 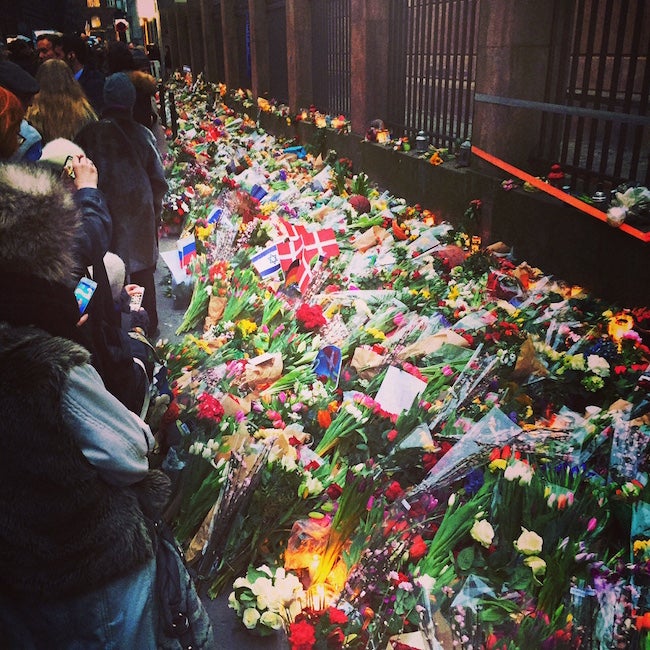 The memorial on Krystalgade outside the synagogue.