Dining halls are a college rite of passage - one that I've mostly skipped out on. I entered the co-op lottery the summer before my freshman year, and have been living and eating in Harkness since the moment I got to Oberlin. But every co-oper gets one meal in CDS every week, and when Harkness has leftover night, I hike down to Stevie (a.k.a. Stevenson, Oberlin's biggest dining hall) to check out the fare. So for the curious, here's a taste of what makes dining halls and co-ops different. Consider it an anthropological study.

You have to stand in line. In the dining halls, you can spot a visiting Harkie from a mile away. We're the ones standing bewildered in the middle of the food court, clutching empty plates and wondering how we're supposed to get food. "Excuse me," we murmur, tugging at the sleeves of passers-by, "but why is all the food behind Plexiglass, and why are all those people standing and waiting?"

Some co-ops do have lines, of course, but in Harkness their absence is a matter of pride. Instead, we have an efficient and meritocratic tradition of mobbing: the clock strikes 12:20, a vat of steaming mashed potatoes is swept through the kitchen door, and to the victor go the spoils. It seems animalistic, but there's actually an elaborate code of chivalry. If you know someone's been waiting particularly long, or needs to rush to get to class, you let them go ahead. (Just because we're savage doesn't mean we're not co-operative!) And there is nothing more exciting than being the first to grab the spoon and fill your plate. Food just tastes better when it's been won instead of served. 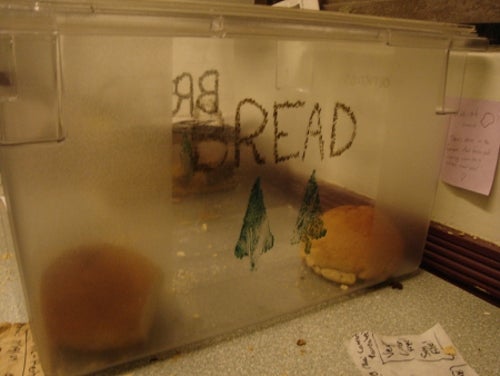 The last few loaves of a batch of Hark's famous bread.

Forks and spoons are not endangered resources. The dining halls are dotted with cheery little forests of silverware. Okay, so Harkness does actually have enough forks for all of our members - more than enough. But people rush off to class with fresh granola or take some stir-fry up to their room, and somehow it takes a while for the silverware to make it back to the kitchen. So it's always a good idea to show up to meals a little early. Otherwise you may find yourself eating noodles off a knife or siphoning up soup with a turkey baster*, which always makes lunch interesting.

* We're a vegetarian co-op, so I have no clue where the turkey baster came from...

You're not supposed to go in the kitchen. It doesn't matter if you bring an apron, a hair net, and a framed copy of your culinary school diploma - CDS just won't let you in unless you work there. In a co-op, of course, everyone works in the kitchen - and everyone owns all the food inside. I love wandering through the kitchen to see what's cooking, or stealing a (fresh local organic!) apple from our giant walk-in fridge. I love knowing that my friends made our bread, granola, yogurt, and tofu. I love coming home late at night and finding that someone is making vegan doughnuts, or soaking beans for tomorrow's lunch. And I love knowing that if I don't like what's for dinner and want to make something else, hey, it's my kitchen! 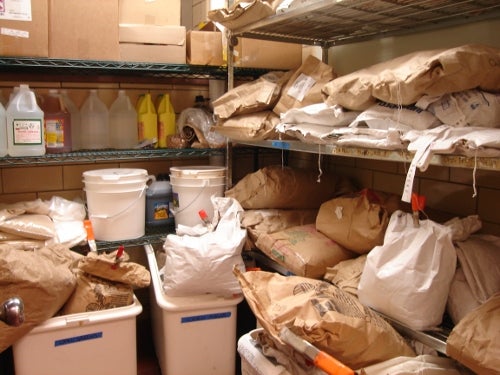 The dry foods room: we own it!

You don't have to wash your own dishes. Right next to the door in Stevie there's a magical conveyor belt, and your dishes disappear into a tiny room and come out squeaky clean! Yeah, most people probably consider this a good thing... but I've grown to love my weekly crew. It's pretty cathartic to abandon a particularly frustrating problem set and scrub the living daylights out of some poor pots. There's always good music; Harkness has a wonderfully eclectic CD collection, and the DJs on WOBC like to give shout-outs to all the co-opers doing crew. Last semester, the folks on my shift became obsessed with A Night at the Hip-Hopera and listened to it pretty much every week. I've been to a lot of Friday night crews that ended in dance parties.

Most importantly, when you know that you or your friends have to take care of every mess or get shut down, there's a pretty strong incentive to keep things clean. And after maintaining an industrial kitchen according to state health code, tidying up your kitchen at home is a cinch. 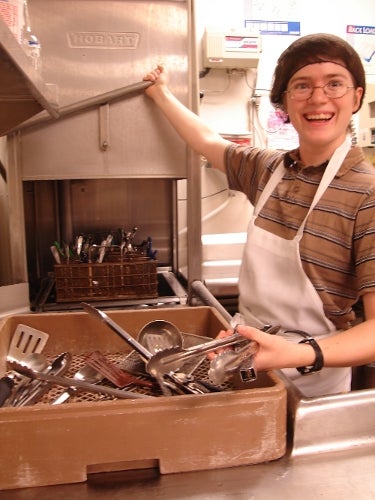 Ryn with the Hobart, our beloved industrial dishwasher. Note the stylish hairnet.

People don't clap for meals. We love food! It's tasty, it's life-sustaining, and it's a lot of work to make. So about five minutes into every co-op meal, when everyone is served and settled and has taken a bite, someone will start to clap. If it's a particularly good meal, people will whoop and holler, pound on the tables, bang plates and forks together. (For Ma'ayan's Thai special meal last weekend, we clapped twice - it was that tasty!) Clapping isn't just for the cooks - it's for the people who grew the food, the foodbuyers who picked it out, the crews that keep the kitchen clean, and everyone else who works so hard so we can eat our meal. It is so awesome to see everything stop for a minute so we can celebrate the work we've all done for our food.

Yay! I think your shout out just inspired me to write about my special meal! But I don't have any photos...

That last photo is about the happiest I've seen ANYONE while Hobarting, and even after restaurant dishwashing, I LOVE HOBARTING. Only a co-oper could say that and mean it.

Also, in a dining hall, you don't know what's in the food or how it was prepared. Usually, neither do the people serving it. In a co-op, cooks put signs next to all the dishes with a list of ingredients, mostly to make sure no one eats something they're allergic to, but also for interest. And if there's any doubt, you can ask the cook directly. Not true in Stevenson!

p.s. In Stevenson, there ain't much to clap about.