I'm an aerialist. I do circusy things. Through the years I've learned that when you're suspended many feet off of the ground, there is absolutely nothing worse that you do than poop out while in the middle of doing something. Quite literally, you could die. It's crucial to maintain a steady reservoir of energy at all times, so that when you "give it your all," it's not all you've got.

That's why when asked what is the most important thing about doing aerials, my answer is invariably the same: take a break when you can, while you can, however you can. You definitely won't regret it later. In some cases, that break might consist of pausing for a few seconds while hanging upside down by your ankles. In my case right now, however, that break is flying back to Tucson, Arizona, for Thanksgiving (for what seems like hardly longer than two seconds) to see my family.

This occasion marks my first time going back home after initially leaving for college. I've been a little apprehensive as to the thought of going home for the last few weeks, but at this point I'm just really excited. As it goes with most things I get excited about, I plan on documenting the occasion thoroughly. This blog is going to be a photo essay of the highlights of my trip back to T-town (colloquially known to some as the "Dirty T," although I heartily refute this).

Let's begin with the view from the plane ride: 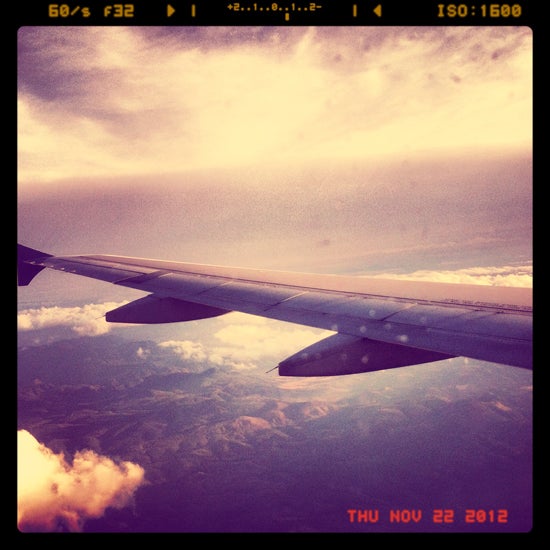 I'm such a sucker for mountains. That's definitely the one big thing Ohio is lacking-- epic natural skyscrapers.

I was happy to see my family waiting for me at the airport, and happier yet that my dogs were with them! I think if every college student were to make a list of the top three things they miss from home, dogs would be right up there as #1 or #2. I don't know about cats, though. Cats are too fickle. Most of them seem as if they would prefer their owner to be dead. 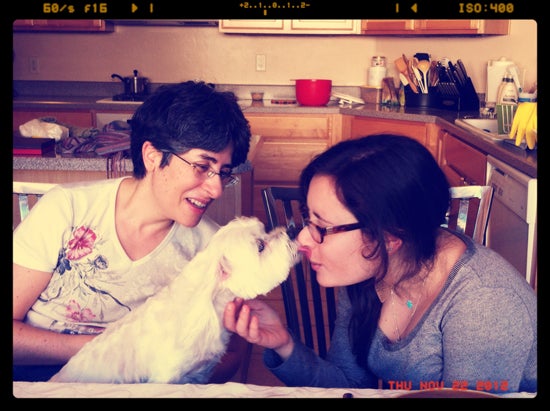 My dog Leo being adorable as usual. And yes, he does sit at the table with us during meals... What of it?

For a lot of people, the best thing about going home is seeing friends. I'm thankful that one of my favorite friends lives with me. My brother and I get along great, I almost feel bad for abandoning him at home by himself by leaving for college. We went on a pre-thanksgiving feast run together. 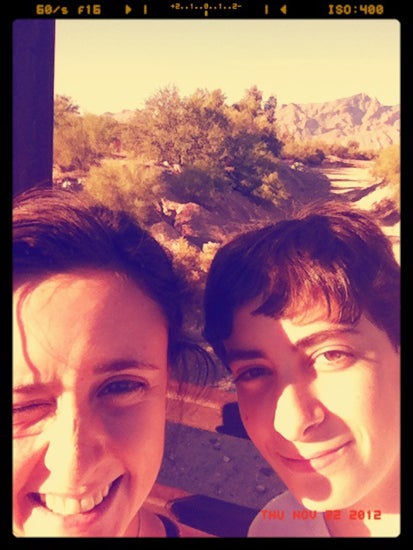 In case you were wondering, I am squinting because the sun is so bright. There's a completely different quality of light in this part of the country. Hard to explain, but true. Also, look at the desert scrub and the mountains in the background! So radically different from the Midwest.

I won't include a thanksgiving dinner pic of my plate because it's overdone and kind of tacky. Everyone knows what turkey looks like.

Anyways, Friday morning I visited with my grandparents and we got to talking about the distance between Oberlin and Tucson and what it is comparable to. The best ones we came up with were:
•Paris, France to Jerusalem, Israel
•London, Mumbai, India to Bangkok, Thailand
•and of course the ever popular Flin Flon, Canada to Anchorage, Alaska.
That last one really puts it into perspective, I think, because everyone has heard of Flin Flon... right? 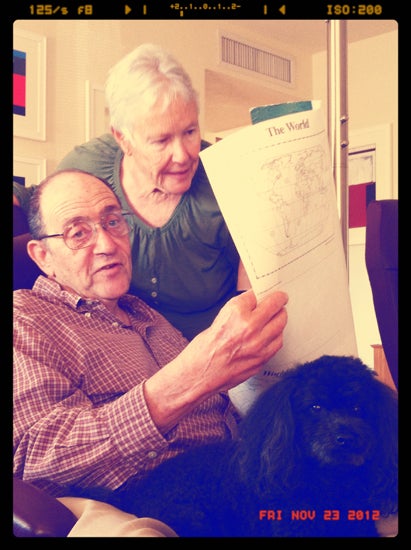 My grandma went old school on us and whipped out a real live world map as a reference. If you look closely, you can see that the map is labeled (ever so astutely) "The World" on the back.

Friday lunch was on the light side. I think it's funny that the five of us shared a single salad. We're pretty health conscious--it's great. Those crackers you see on the table? Yeah, they are actually called Flackers. That's right, flaxseed crackers. Yum. 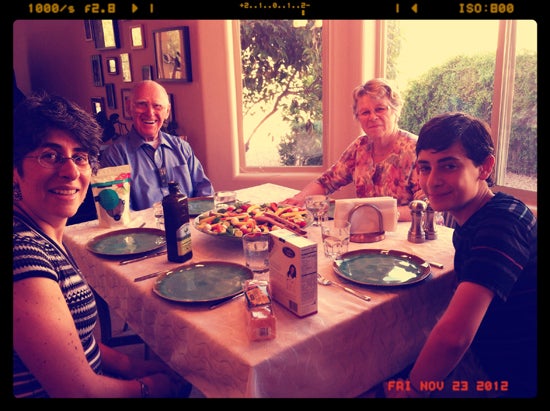 You probably can't tell from this picture, but my grandpa is super ripped. He does push ups first thing every morning and goes to the gym all the time. He's going to live to be at least 120. 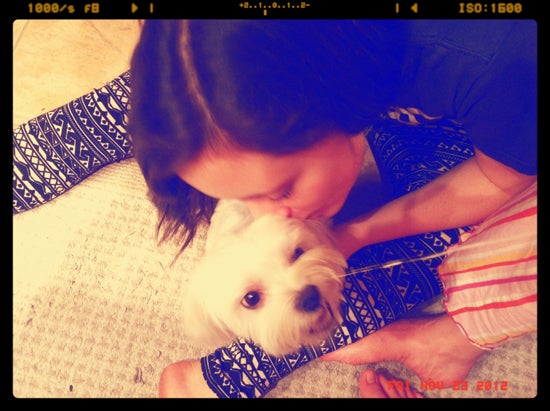 My mom does this with him every night. It's actually kind of gross because he is basically eating the floss over and over again while my mom continually pulls it out of his throat.

These last four pictures were all taken by my brother and show just how majestic the desert really is. As you can see, I kind of gave up on the photo editing effects here; my phone stopped working and ALSO I want everyone to know what the true colors of these pictures are.

The mountains again! So amazing. Can't get enough of these guys.

I kind of feel like Waldo from "Where's Waldo?" in this. 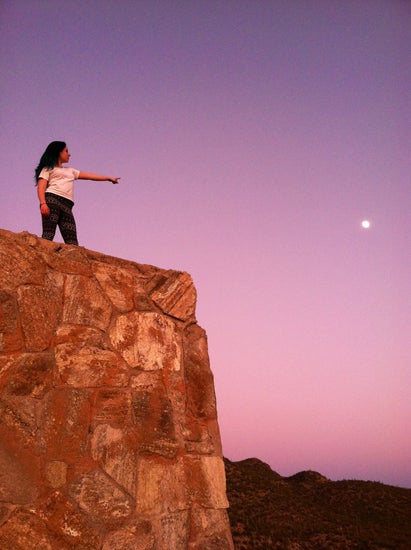 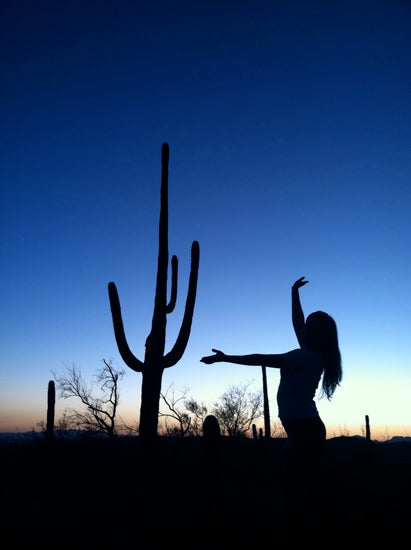 The saguaro cactus is native to the Sonoran Desert. They live more than 150 years and take at least 75 years to grow a side arm...so show some respect! We have a wise elder in our presence.

All in all, my visit to Tucson was surprisingly uneventful, in a good way though. I've often heard from various people that coming home after being away at college can sometimes be a weird dynamic, but fortunately I didn't feel any of that at all. It's amazing how quickly we can slip back into old routines and pick up old friendships right where we left them off. It's been great getting to spend some time in the Southwest, but I'm glad to be heading back to Oberlin soon. My life is more or less Oberlin-centric now, so in a way I feel like I'm heading back home.

Getting excited for some snow!!

Beautiful pictures Dara! The Southwest is high on my list of travel destinations!

Although I am partial to Upstate New York's brand of natural beauty, the Southwest has got to be one of the most gorgeous places I've ever been. I'm glad that you had such a picturesque Thanksgiving!

Awesome post!! I love the photos.... they're cute and cozy and majestic all at once (tho maybe not at the same time? haha). I'm actually going to Arizona for my Winter Term this year, so pumped, I've never been before but your post just got me even more excited! :)