Well, summer is over, and this year's batch of freshman have descended upon fair Oberlin like so many locusts, swarming about campus and making it impossible to get a table at Black River.

It was bound to happen eventually, I suppose. Oberlin couldn't stand to be so quiet for so long, and, though I enjoyed the molasses-like quality of Oberlin-in-the-Summer, there was something unnatural about the empty quads and buildings.

Speaking of the summer, I realized that I never showed you guys the bookcase I made. This was one of my many summer projects, for which, sadly, I will no longer have time. A disclaimer: I made this using a crappy handsaw, some 2 x 6s, and some nails, so it looks like a two-year-old's version of a bookcase, but, here it is: 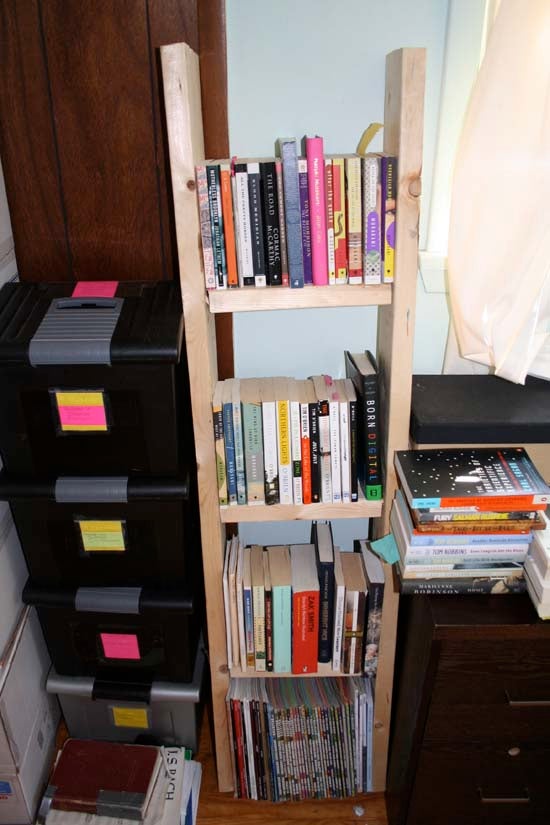 I think it's homey. Though, when I told one of my friends that, she said, "maybe more homely than homey, John." So, I've already heard that particular joke; there's no reason to repeat it in the comments. That said, I've heard a lot of jokes about the quality of this bookcase, and I'll give a prize to the person who can come up with the most original joke at my/my bookcase's expense. It's not the jokes that bother me; It's the same couple of jokes over and over again.

Even though the summer is over, I think I've learned a thing or two that might come in useful during the school year proper. In no particular order:

(1) Oberlin is surrounded by farmland. This has its downsides, as every Oberliner from New York City loves to tell you. But it has its upsides, too. There are tons of little produce stands dotted around Oberlin that sell really tasty, really fresh fruits and veggies for really cheap. I'm already planning on biking down to my favorite stand (just off Telegraph & West Ridge Rd.) as soon as I finish this post. I'm going to have some fresh sweet corn for dinner tonight. I can only assume that these stands stay open during the school year--at least until the Doctor Zhivago-esque Oberlin winter begins.

(2) On a related note: take some time, and cook for yourself. I know, CDS is super-delicious and all, but I've gotten into the rhythm of cooking three meals a day for myself, and it can be a very grounding experience--much more than, say, going to Stevie and eating a burger. All the dorms have kitchens--some nicer than others; use them! Though I should caution you to mark all food that you put in the refrigerator, and mark it well. Food in dorm fridges will disappear very quickly; hungry hall-mates have no shame.

I should say, for all you dorm chefs to be, try not to set off the fire alarm too often. I recommend opening the window and bringing a fan. Oberlin fire alarms tend to be quite touchy, and forcing all your dorm-mates to go outside in stages of partial undress is not the best way to endear yourself to them.

(3) This isn't really something I learned this summer, but it's something I certainly took advantage of: Infinite Monkey, the comics shop downtown, rocks. Erin and Josh, the couple who run it, are some of the nicest people I know. I know when I was first getting into comics, I was always intimidated by the shop owners who would look at me like how do you not already have this comic? or why are you asking me questions? Don't you just know the differences between astonishing x-men, new x-men, uncanny x-men, adjectiveless x-men, and x-men: legacy? (I'm not making that up, and, hard as it is to believe, there are even more x-men titles).

If you've ever wanted to read a comic or a graphic novel and were unsure how to start or needed help but were afraid to ask, go to Infinite Monkey; Josh and Erin will help, sans judgment. Their recommendations are almost always spot on, and you can even set up a pull sheet, so that, every Wednesday (when new comics come out), Erin and Josh will set your comics aside for you, which cuts down on the time you would have to spend browsing the shelves.

And, if you're taking a class that uses a comic as a class text (there are several), do the world a favor and buy it from Infinite Monkey, not the Barnes & Noble-run Oberlin College Bookstore.

(4) I know this isn't really summer related, but I'd be remiss if I didn't plug for all of Oberlin's many journalism-related groups. I strongly encourage you to get involved with The Review, The Grape, Wilder Voice (definitely Wilder Voice), In Solidarity, The Plum Creek Review, Spiral, or one of the many other on-campus publications (am I forgetting any?).

College is unique in that you are surrounded by heavily-subsidized, high quality, really cool publications for which you can get credit (through the Rhetoric & Composition department) and read for free. You really won't regret it.

Lastly, though I'm no photographer, I thought you might enjoy seeing my apartment. Now, it's off-campus, so, for those of you who aren't seniors, dream on. I'm absolutely in love with the place, and I show if off every chance I get. So here are my poorly taken and (probably) improperly embedded photos: 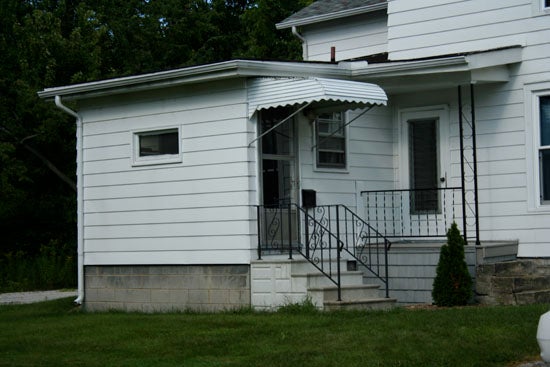 Chez Moi from the Outside 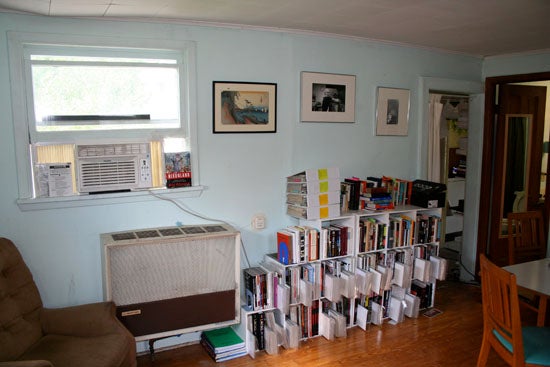 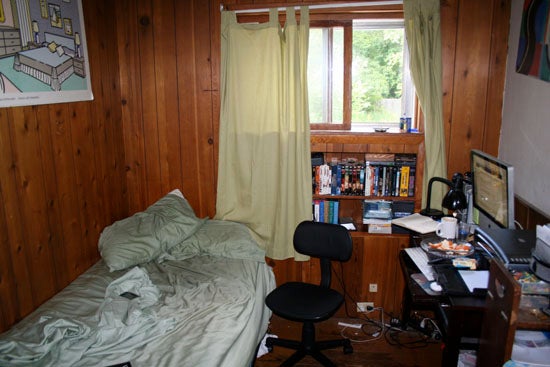 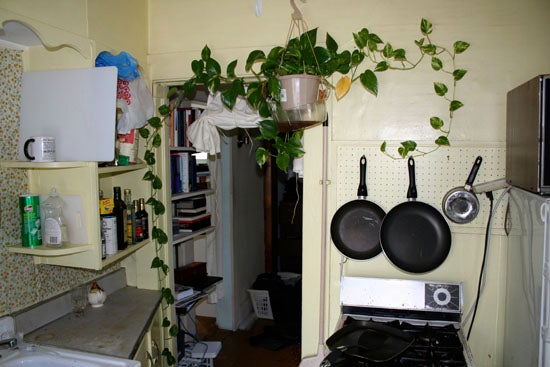 I realize, just after I posted this, I had forgotten an on-campus publication. There's a new blog/web publication in the vein of HuffPo called Fearless and Loathing. It looks pretty cool; I know I've added it to my Google Reader.

In England, the word "homely" *means* homey. So maybe your friend, um, was paying you a compliment? Is she British, perhaps? (No, I didn't think so.)

Nice digs. Inquiring minds want to know: what are all those divider things sticking out from the living-room bookshelves?

I like that. Yeah, we'll say she was paying me a compliment...

The dividers are actually comics facing out. I do that for ongoing books. For example, Y: The Last Man is sitting regularly in the bookshelf because it finished last year. Fables on the other hand, sticks out because it's still going on. I think I may have done a really crap job explaining this, but I hope this makes sense.

Now that's a lot of Haruki Murakami! Even more than I own.

Wow, that would be so awesome.

But I think my mind is blown.

I do love me some Murakami. What's your favorite? I'm partial to Kafka on the Shore.

We live on the same street! I thought I recognized that house :)

I LOVE that house. I have so many amazing memories from that place. And videos of parties we had there... which will never see the light of day. ;-)

Ma'ayan--
Which one are you in?

Ben--
Perhaps these videos might be good for the Oberlin Stories project. From your reticence, I imagine there would be quite a bit of "fearlessness."

46. You are literally my neighbor; I didn't realize that was an apartment on that side, I know the people living in the house, though. I can wave to you from my living room.

Is it possible for you to post the ISBN no for the book "Born digital" ? i was looking for that book, thx

Hey I'm going to be a first-year this fall; what cooking equipment can I expect to find in the dorm kitchens?

Talia: Dorm kitchens have a sink, a communal fridge, a stovetop (almost positively electric), an oven, and usually a microwave. Cooking implements/cookware are things that you will have to provide, clean, and store yourself.