I've met my Oberlin friends in a variety of different ways: through jobs, student organizations, classes, similar living situations, and through mutual friends. Oberlin is small enough that it seems like you only need one other person to connect you to pretty much anyone else on campus. This past summer, several of my friends introduced me to Ellen, who graduated in 2010. Ellen and I got to know each other over the summer and into the first half of the school year, while she was still living in Oberlin. Shortly after meeting, it soon became clear that we were going to be good friends.

Ellen and I have a whole bunch of mutual dorky interests. As soon as our mutual love for "Glee" was revealed, we began watching the show together every week. After Blaine (played by Darren Criss) was introduced to the show, Ellen introduced me to the wonders of "A Very Potter Musical" and Starkid.

If you aren't familiar with Starkid, they are the theatre troupe behind A Very Potter Musical and A Very Potter Sequel, both of which are, dare I say, "totally awesome." If you haven't seen them and are a fan of the Harry Potter series, I definitely recommend watching them. This post is going to have a whole bunch of references to them, so if you feel a bit out of the loop (or if I seem a teensy bit crazy), that's why.

I instantly became a fan. I've always been a fan of parodies and satires and "A Very Potter Musical" fulfills my love of parodies, musicals, and Harry Potter. What more could I ask for?

Ellen and I continued to watch "Glee" on a weekly basis until the end of fall semester, when she moved back to Columbus. We would, however, soon be reunited for an epic, rather spontaneous adventure.

A couple weeks ago Ellen was in California for a job interview and I was reading through the tweets of the accounts that I follow on twitter. I soon discovered something amazing - Starkid tweeted that extra tickets had become available for their new musical, Starship. The show for which tickets were available was a week from the day they tweeted about the tickets. Since I was g-chatting with Ellen, I asked her half-jokingly if she would want to go with me. She agreed, and we began scheming. I decided that since Ellen's birthday had just passed, that this was going to be my birthday present to her.

Starship was running in Chicago, which is a mere six-hour drive from Oberlin. Within 10 minutes of my conversation with Ellen, I had purchased tickets for Starship and booked a hotel for the night of the show. I'm not the type of person who does things spontaneously, so this was a pretty big step outside my comfort zone. 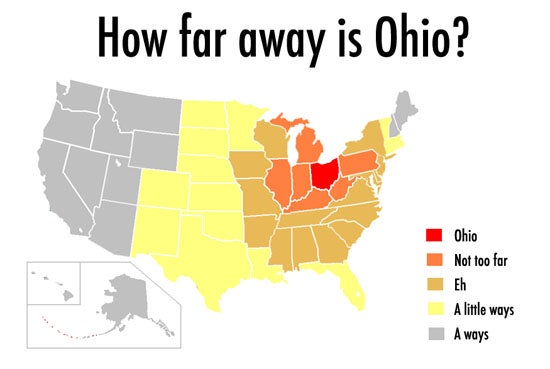 As ilovecharts has demonstrated, Chicago really isn't all that far from Ohio.

Fast forward to Monday, 21 February. The fates began to conspire against our trip, doing nearly everything possible to keep us away from Chicago.

First, I woke up that morning with a fever, congestion, and general feelings of being sick. I decided that I wasn't going to let illness get me down, so I did everything I could to help myself feel better as quickly as possible. Shortly thereafter, Ellen called me saying she was about an hour or so behind schedule - she was driving from Columbus to Oberlin, where I would pick up the driving duties and take us to Chicago - due to the fact that her car was having problems.

We finally left Oberlin shortly before noon, and well after our scheduled departure time. We managed to get out of Ohio before it was hit with a snowstorm, but we encountered a snow storm in Northern Indiana that had me driving about 30mph below the speed limit. Though I have acclimated somewhat to winter weather driving in the midwest, driving in a snow storm still terrifies me. 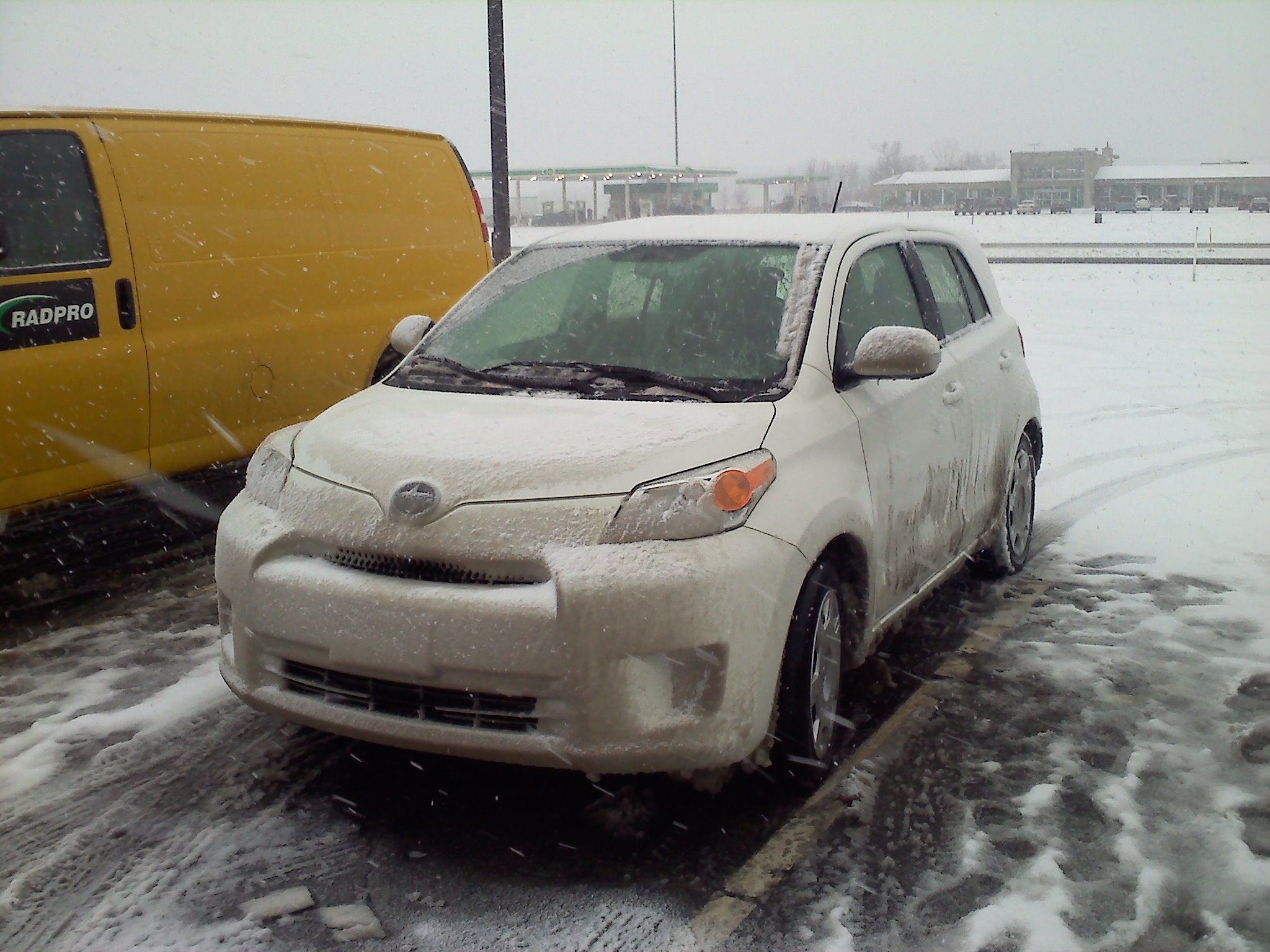 My poor car, Wilfred (yes, he has a name and a gender), at a rest stop

Ellen and I passed the time by (loudly) singing along with Disney songs and soundtracks to pretty much every epic musical ever written. And a whole ton of Glee covers. Oh, and, of course, the music from A Very Potter Musical and A Very Potter Sequel. And, being determined to make it to Chicago in a timely fashion, we only stopped twice on the way. Once for lunch and once for gas. Excellent. 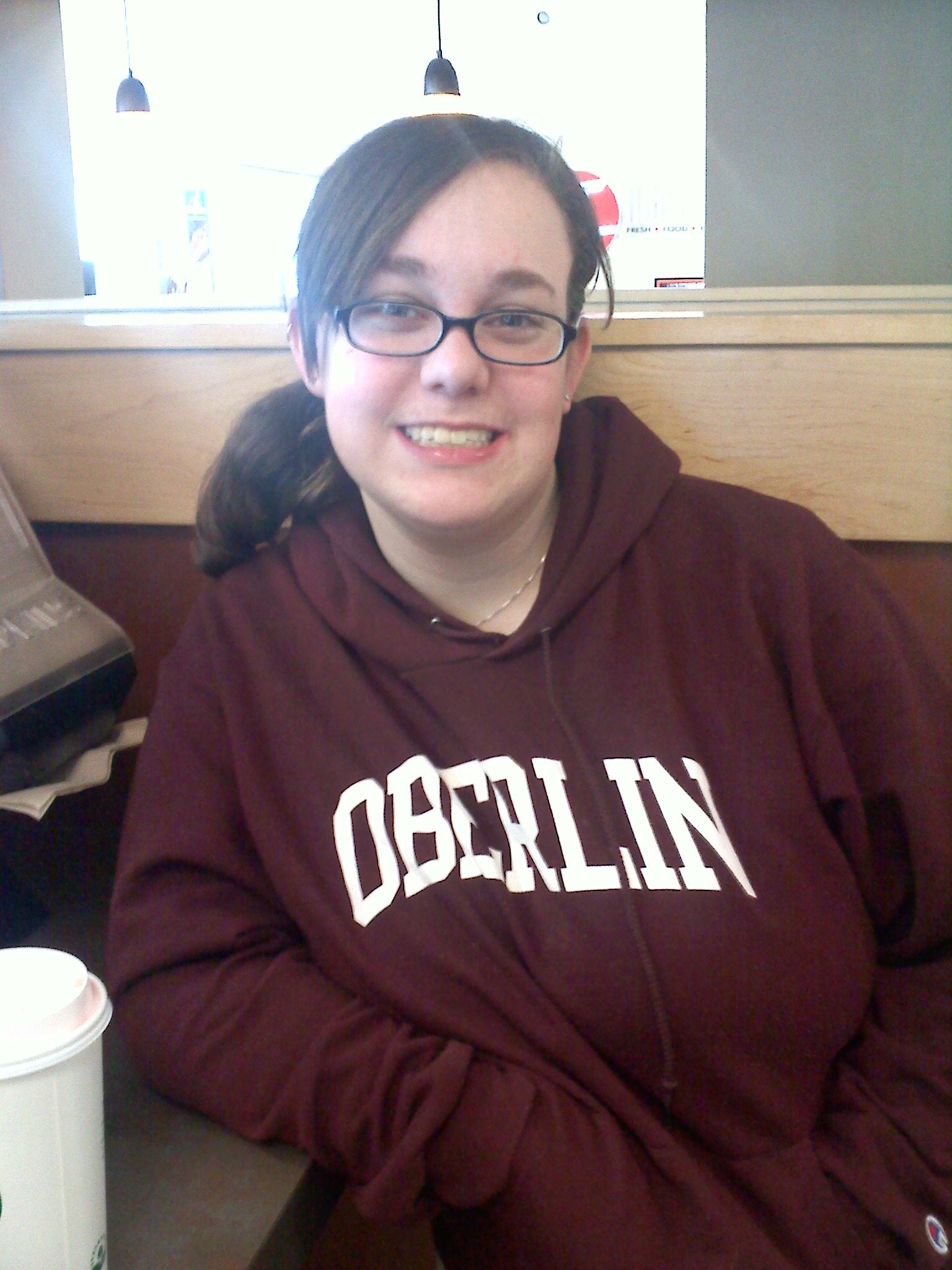 Ellen smiling awkwardly at a rest stop! She'll probably hate me for including this picture...

We arrived in Chicago less than an hour before we were supposed to be at the theatre, eventually found our hotel, despite Google's shoddy directions (and the fact that I drove right by it without either one of us noticing...), checked in, and departed for the theatre, which was located in an LGBT center a few blocks from our hotel.

When we arrived, we encountered a room full of blue headbands (inside joke #1), brightly colored Wayfarers (inside joke #2), chucks (not an inside joke, just a popular shoe, apparently), and excited überfans. Yes, I just coined a new word: überfans. It'll probably catch on just as much as my trend of ending Oberlin blog posts with a quote (meaning that I'll be the only person to ever use this word).

The show was EPIC. Darren Criss wrote the music, and described the show as a combination of Aliens and The Little Mermaid with a touch of Avenue Q and a bunch of sci-fi references. The main setting of the musical is a planet inhabited by giant bugs, and rather than costumes, the Starkid crew utilized elaborately crafted puppets. They were SO EPIC. Here are some pictures I stole from random places on the internet! 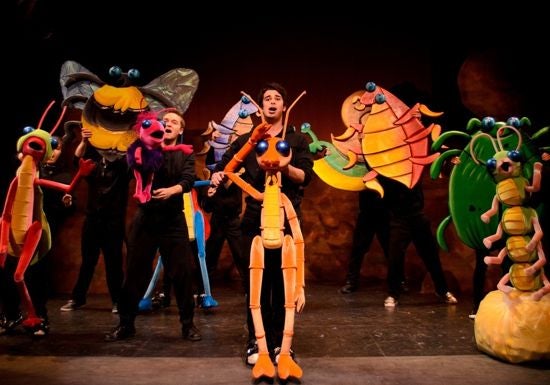 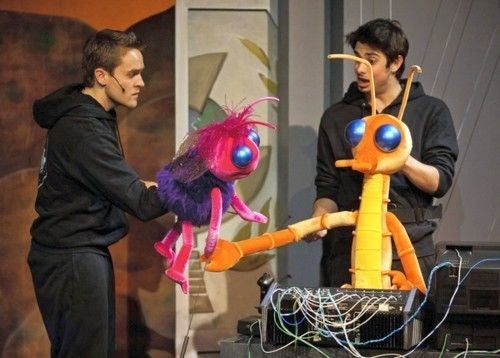 I could write an entire review of the show, but instead I'll just say it was full of many amazing moments: several cleverly-crafted plot points, awesome singing, a whole bunch of nerdy sci-fi jokes (including references to Ender's Game, one of my favorite novels), one hilariously epic Glee joke, and a lot of mocking of Darren Criss. This was the curtain before the show and during intermission. Sorry for the bad quality, my phone apparently didn't want to take a very good picture.

After the show, Ellen and I stuck around and managed to snag pictures with Joey Richter and Joe Walker, two of the better-known Starship actors. In my opinion, their scene together in the second act totally stole the show. It was the perfect combination of hilarity, sincerity, and awkwardness. We tried to get a picture with Lauren Lopez, who is our favorite Starkid, but she disappeared before we were able to get a photo with her. We were, however, highly amused by her bio, in which she reveals why she is basically the soul mate of our friend Ali: 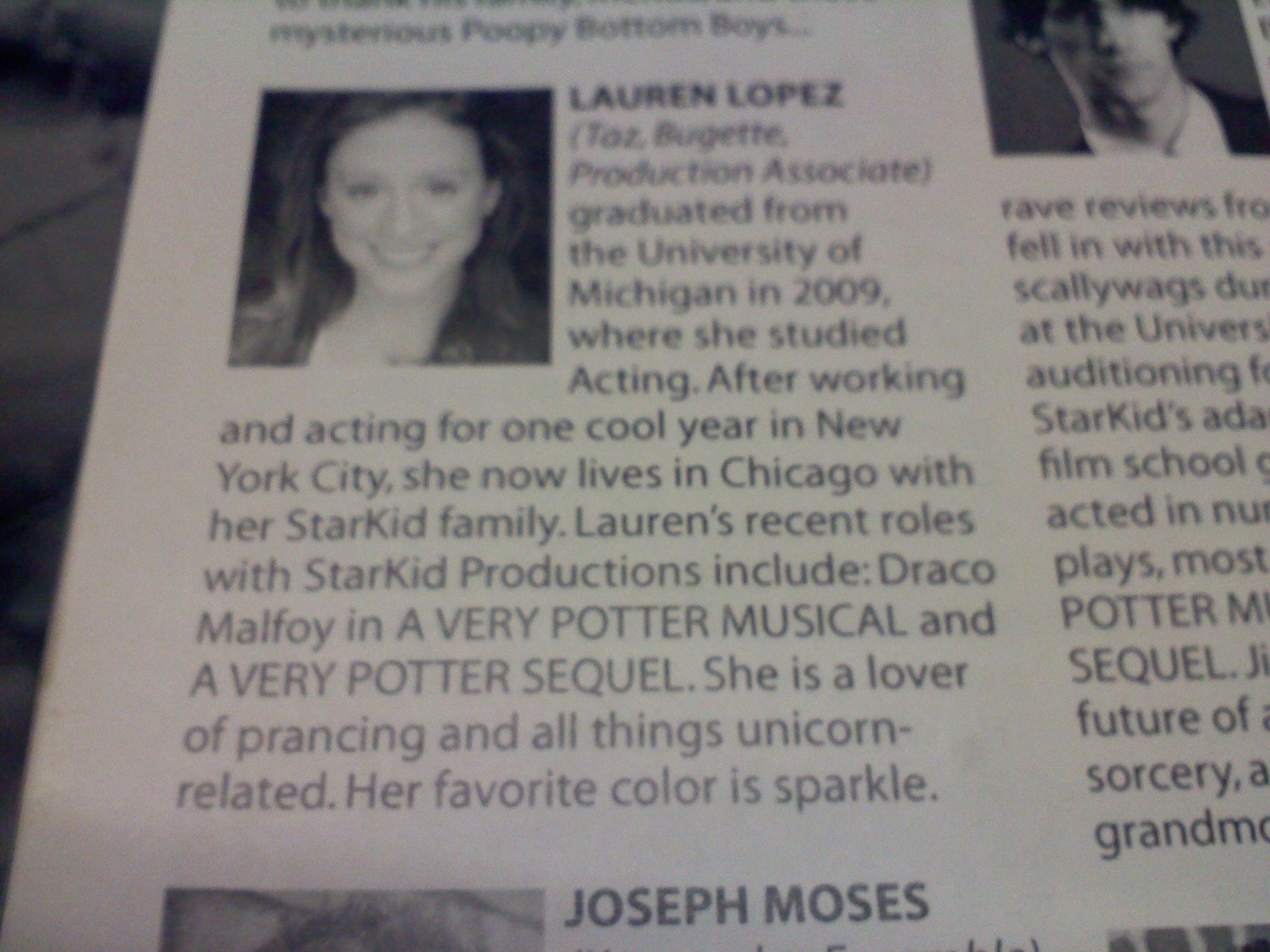 Her favorite color is sparkle. Magic! 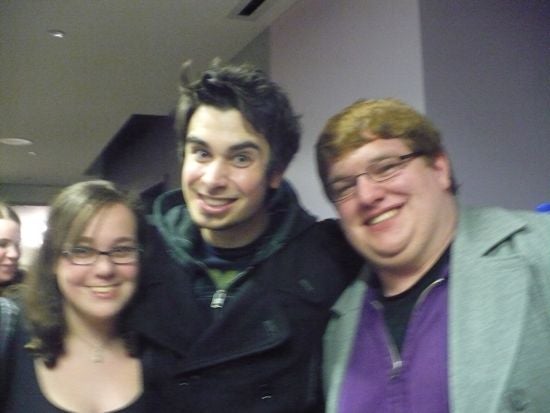 From left to right: Ellen, Joey Richter, and me! 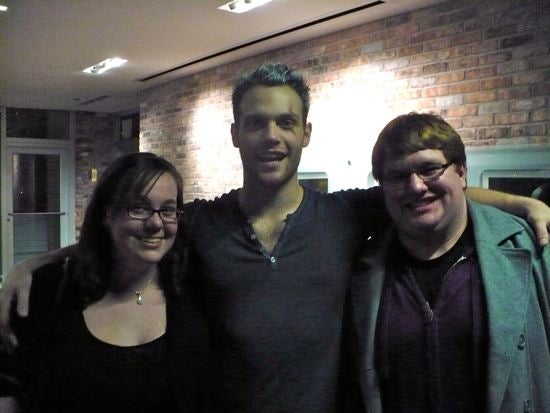 From left to right: Ellen, Joe Walker, and me!

This was the best Monday EVER. I totally reaped the benefits of my part-time status and being able to randomly disappear from campus for a day. Thanks, Ellen, for this totally awesome adventure and for encouraging my spontaneity. You rock!

this comment is going to take so long to write. Point by point:

1) I will also point out that our epic bromance (since I'm pretty sure that's an accurate way of describing us) is also an example of still making oberlin friends even as alumnae, as we didn't really become friends until the summer after I graduated.

2) Can I just point out that I flew to California on a Sunday, flew back the next Saturday, drove my butt to Oberlin on Monday, to Chicago the same day, then back to Oberlin and then to Columbus the next day. I win at traveling.

3) Poor Wilfred and T.S. Eliot (my adorable car's name). They both live to fight another day, though.

4) I CANNOT BELIEVE YOU PUT THAT PICTURE IN. Sigh. Patrick. I look like a disheveled twelve year old in it.

5) The puppets were so epic. I seriously need the DVD to come out right now, if for no other reason than so we can show Ma'ayan and Ali and everyone the awesome puppetry.

6) Still can't believe we were the only ones dying of laughter at all the Ender's Game references. "One day, someone like me is going to kill ALL OF YOU BUGS!"

7) Lauren Lopez, why did we miss you? Biggest tragedy of my life. "I will wrap you up in a tortilla and eat you as a tasty tasty snack. Maybe with some pico de gallo."

9) Thank you for such a totally awesome birthday present. Best friends forever, yo. I look forward to seeing A Very Potter 3, Return of the King with you one day.

Sounds fun! In my opinion, the only thing that would make it better is if Darren Criss was there!! When are you doing the Six Degrees of Oberlin???

@Ellen: This comment is probably going to rival yours in length.

1. Agreed. More examples of making friends with alums include Colin, Bricker, and Ma'ayan. I didn't meet any of you until after you graduated.

2. Awesome traveling ftw. And you got to go to some awesome places. I wish we had had more time to explore Chicago.

4. Hehehe. How could I not put in that picture? hehehe

5. Epic, epic puppets. ALSO. It's supposed to come out on youtube in mid march. Clearly we need to have a watching party at some point. Preferably somewhere with a ginormous screen, plz.

7. LAUREN LOPEZ. The fact that we missed her means that we MUSTS go see them again sometime.

8. Isn't it convenient that Starship finished running a few days before Darren Criss' birthday party? Coincidence? I think not.

9. Last name I came up with a totally awesome potential name for the third Very Potter Musical, but now I forget it. Darn.

@Sara: It was SO much fun. And agreed, it would have been even better if Darren Criss had been there. I'm working on six degrees of Oberlin now, so it should be up sometime before I come home for spring break!

Though I have yet to see A Very Potter Musical/Sequel, I think I would totally and completely love Starkid.

Fact: the photos you have in this post look inspired from a Story Pirates skit/song called Giant Bugs 2, one of the most genius things I've ever seen/heard.

@Ma'ayan: Clearly a viewing party is necessary. Ellen and I have also talked about how you need to watch Starship once it's on youtube, if only to admire the puppets.