Last spring break, you may recall that I completed a stressful week and then got on a Greyhound to New York City. I even made a mix for the trip called I Need A Break (playlist listed at the end of this blog for amusement's sake). This fall break, I wasn't moving at breakneck speed, rather, I was working through a personal to-do list studded with meetings and catching up with photo editing, as well as keeping some of my more stressed-out friends sane. But I like to follow patterns, and at the end of the week, I boarded a Greyhound bus with my friend Daniel and we started the long ride to the Big City.

In retrospect, I realize that New York is a good place for a vacation but not necessarily a break. It is a break from the life of a student, from college life, but it is fast-paced and fun-filled. That isn't to say it isn't a fabulous place and that I didn't have a great time. The short list of what we did included eating as much food as humanly possible (Diner food! Dim sum! Reubens at Katz's Deli! Tea and scones at Alice's Tea Cup! Hot dogs at Gray's Papaya!), seeing entertainment of all sizes (Concerts! Musicals! Plays!) ambling around most of the city (if it's south of 90th Street and still in Manhattan, we probably walked past it), and geeking out at camera stores, tiny food markets, and cooking gadget stores.

New York also has the tendency to radiate OBERLIN whenever there's a break. It seems like 50% of this school is from New York, and about 80% of campus is there over break. Last fall break, my Obie-in-New-York count was 36. This fall, our count was slightly lower: 7, though we attempted a few more than that but the timing was off. Regardless, that's more Obies than I know of that have come to Oberlin from Hawaii. The only way to see Obies out there (other than my awesome dad) is to convince them to fly to island paradise to visit me. Surprisingly, only one person has taken me up on this offer. (P.S. My parents just bought a house with four bedrooms. What is stopping you? Come to Hawaii!)

As it is this wonderful tradition to bring as much as possible of Oberlin to New York, I implemented a plan last fall to bring as much of OCircus! to New York as possible. Over fall break last year, my housemate Chris visited my grandmother and me for a few days, and we started spinning poi at some famous spots around the city, calling it "destination poi spinning," just for kicks. One evening, we spun in Columbus Circle, in this cool circular island in the center of a huge traffic circle. When our friend Franny came into the city for the day, we spun poi on the steps of the Museum of Natural History. 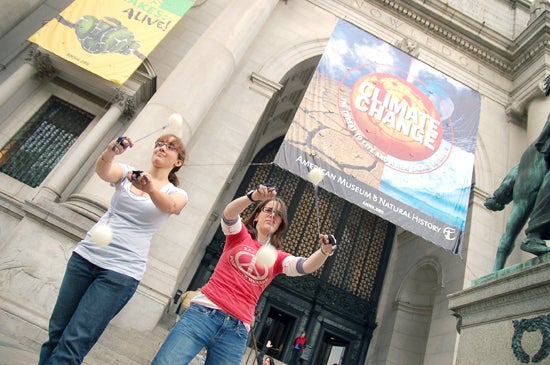 Chris and Franny rock out on the steps of the Museum of Natural History. 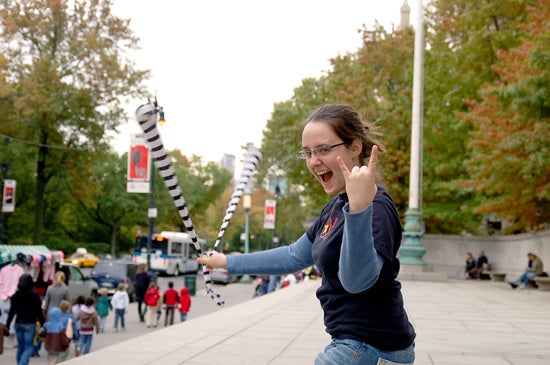 This is my all-time favorite poi photo of myself... it was my Facebook profile picture for months and months. Taken by the lovely Chris. 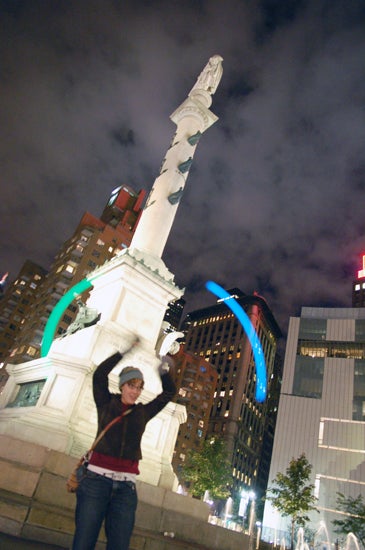 Over spring break last year, Daniel accidentally left his poi in Oberlin (prompting it to be the first thing on his packing list this fall) but we still managed to do the now-traditional Columbus Circle night spin, though sharing one set of poi. 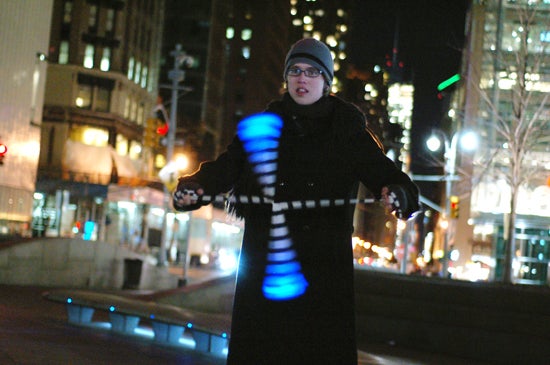 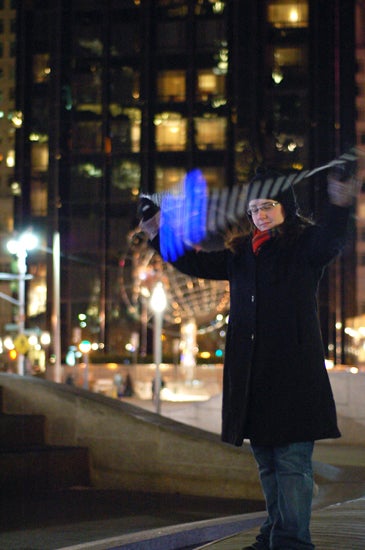 It was very cold in New York over spring break... note the hats and coats. The photo of me was taken by Daniel.

Luckily, Daniel remembered his poi this break... spinning extravaganza commence! We started with the Columbus Circle nightspin, progressed to the front of the Church of Scientology while waiting in line for tickets to In the Heights, in front of the Museum of Natural History with our friend Matt, at High Line Park in Chelsea, and in Times Square at night. 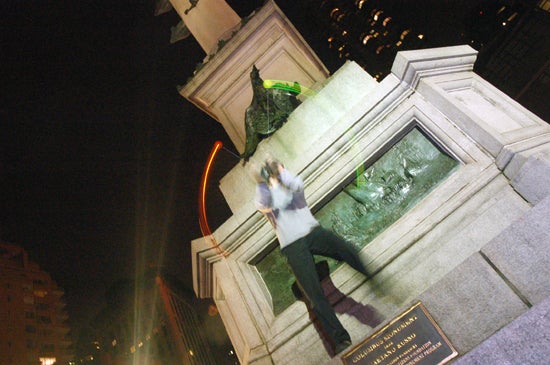 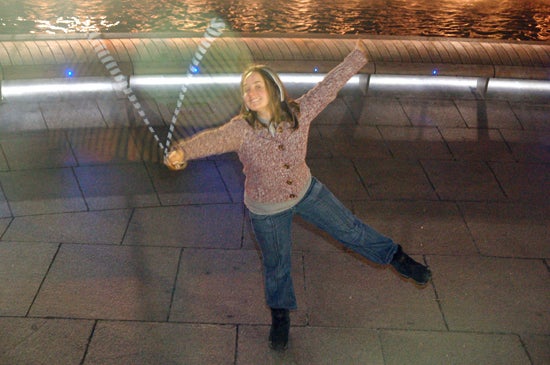 Trying to recreate the happiness of last year's poi photo, this time in Columbus Circle... I'm very happy with this one, too. Thank you, Daniel. :) 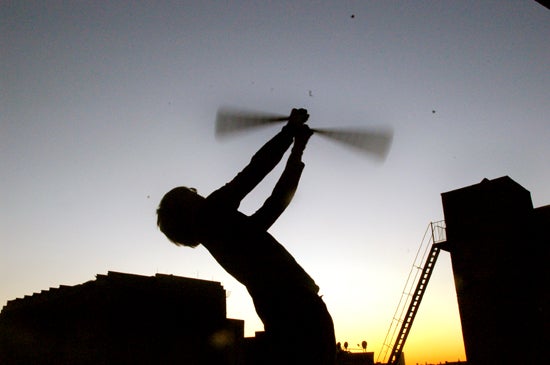 Spinning at sunset at High Line Park in Chelsea. It's a raised park with a really amazing design. So great. 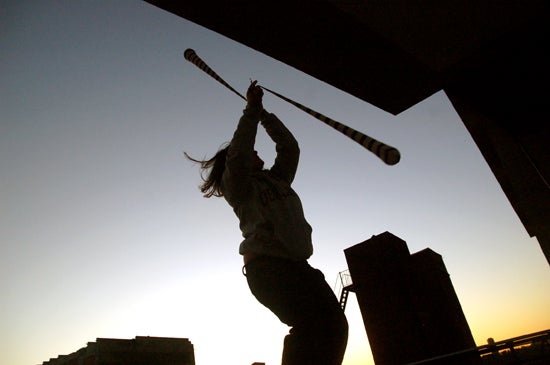 My hair is insane. Thanks for the photo, Daniel. 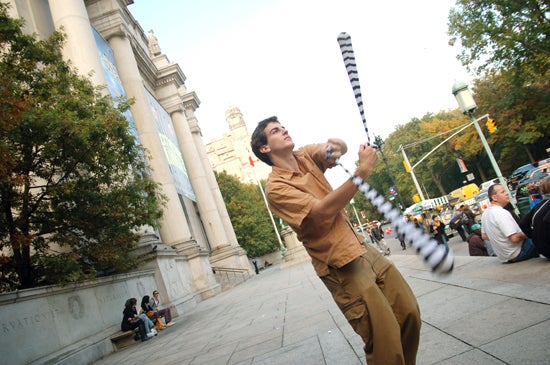 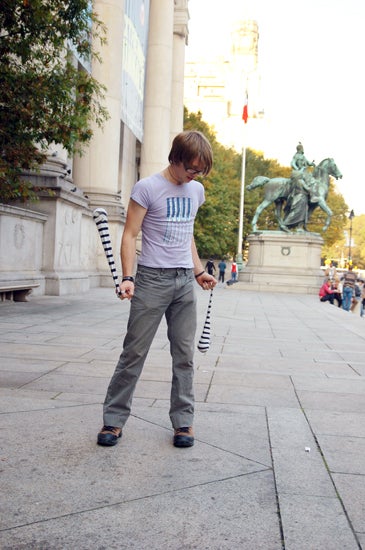 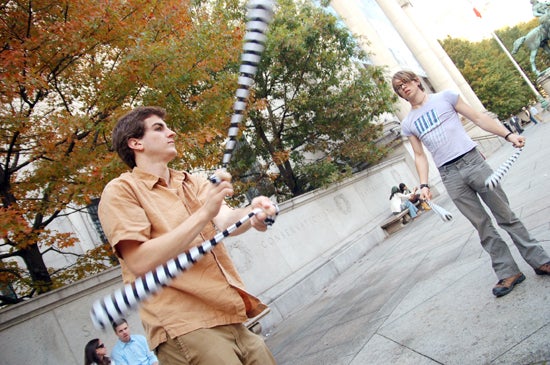 Daniel and Matt take over the steps of the Museum of Natural History. 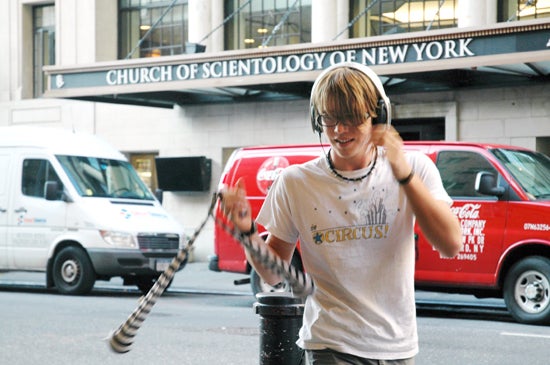 There's a really big Church of Scientology in midtown... like, with a huge sign about the same size and style as a Broadway show. It seemed only natural to spin there, too.

After In the Heights (OH MY GOD FABULOUS SO MUCH DANCING!) we planned to spin in Times Square. As we got to this blocked off part of the street, a now permanent place for pedestrians to gawk at all the lights and take photos of themselves without getting hit by crazy New York drivers, we saw this kid playing with a diabolo, another circus toy (also called a Chinese yo-yo) and got a good circus vibe. Daniel started spinning, then I spun, then we both started spinning. And then two police officers meandered over and told me that whatever we were doing wasn't allowed. Daniel walks over, notes that we aren't busking, but rather, practicing. They told us that any sort of anything on a public walkway was a disturbance to pedestrians, and then blanked on what permits we needed to practice as well as where it was permitted to practice, and where said permits could be obtained. Obviously, we're two rogue college students out to take over Manhattan. Maybe next break. 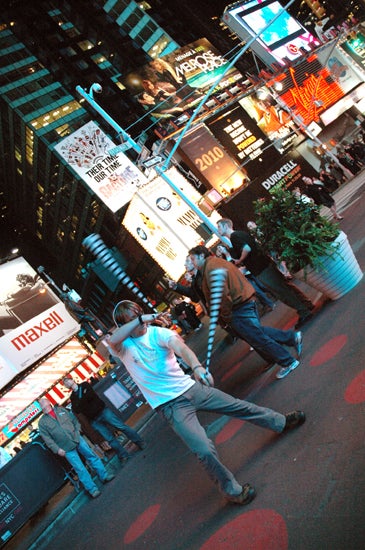 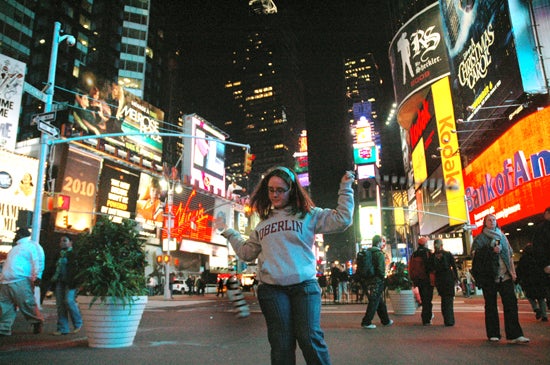 Daniel and I spun in Times Square before we had to stop. We'll be back, New York. Photo of me taken by Daniel.
**

New York was lovely, but there are some things that Oberlin has that New York doesn't over fall break: COLORS! 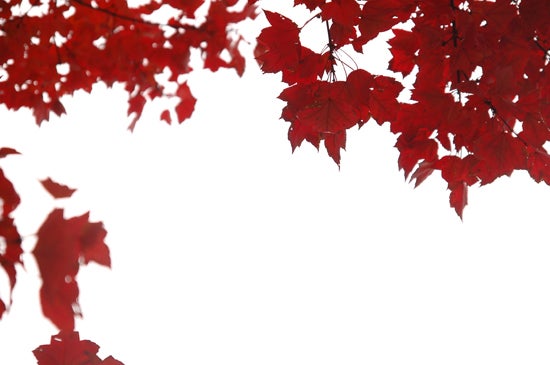 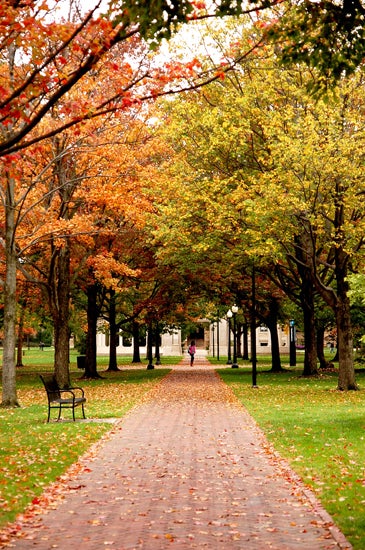 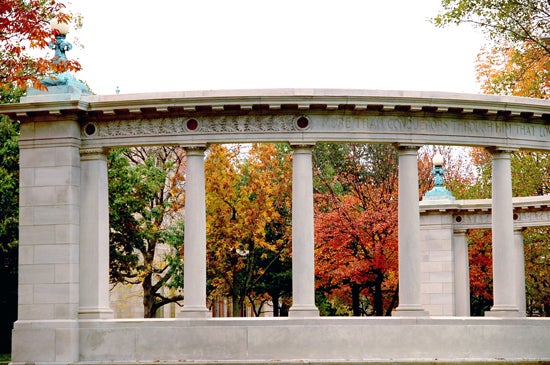 Jealous? You should come visit us this autumn, or next autumn...

I Need A Break:

Daniel is bamf with the beamypoi. My oh my.

I MISS YOU MA'AYAN!

I was really sorry to kill our (perfect?) record of Ma'ayan-Aries-take-NYC. Yay, Alice's! I'm so happy!

I love these pictures! #1 priority of things to learn before I graduate - how to spin poi.

You should try poi-busking some time, it might work.

By the way, your blog blurb still says junior.

Very cool. Looks like spinning is a ton of fun. Interesting landmarks as well.

I just found this and am amazed. Probably the coolest blog ever. Now I need to go back to New York with my poi . . . !