April is crunch month for seniors. For all other college students, May is a living nightmare of final projects and papers and final exams, but April is the deadline for senior stuff: theses, honors projects, whatever your department calls them, they're due. Usually multiple copies, usually to a lot of different professors, and then you have the scary thing called a defense. Or a presentation. Or an exam. Or a "senior project committee meeting." Ambiguous, yes, but to senior cinema majors, it struck terror in our hearts.

Committees consisted of three to five professors, most within the cinema department, though some of us added outside professors from the art, environmental studies, English, and creative writing departments. The committees were supposed to track us throughout our work and offer support and advice once we started producing a product. I met with most of my committee members several times through the semester, but it was more of a checkup than a support meeting. Not: "Hi, my name is Ma'ayan, and I've been working on my senior project for three months now." Rather: "Hi, my name is Ma'ayan and this little spot on my project hurts."

April 21st was judgment day, part one. Our projects were due into a box outside our professor's door at 5pm. I went with copies of my DVD and artist statement around 11am, and as of that time, there was only a sheaf of papers stuffed under the door (either a thesis or a screenplay) and an artist statement in the mailbox. There was no box in sight.

Well, I was done. I went home to work on my other forsaken homework and housework, and began tracking my fellow cinema kids on Twitter in the background while I was reading and cleaning. Chris was in the lab, working side by side with Jason and Theresa, while Jake, Patrick, and Ashley were working from their respective homes. It turned out that Kendra and Alani's projects were the ones accompanying mine outside our professor's office. As the clock ticked down to 5pm, cinema tweets started coming at a faster rate, with far more caps and swearing. It seemed like the only other people to get in a complete project by 5pm were Jay and Natalie. At 5:15pm, most folks had decided that their lateness didn't matter and they were just going to stay in for the long haul. Projects continued to trickle in for the next two days... and then that step of the process was done, for the most part. Many students decided that regardless of this arbitrary deadline, their projects were going to be finished, to their liking, by a later date. Rock on, guys.

Judgment days, part two through twelve, are senior project committee meetings. Each of us had an hour alone with our committees, scheduled either during lunch or at the end of afternoon classes. Facebook and Twitter kept me posted on who had committee meetings when and how they went. General assessment: the meetings were about what was present, not what wasn't, and that the meeting was not scary.

Let me note this: I am terrified of my committee members. Not: "God, if I see them in a dark alley, I'm dead." Rather: "These guys are so cool and so brilliant that I don't know how my project is worthy to be shown in their presence." I asked Pipo, my former crazy wonderful photo teacher, to sit on my committee, though he was unavailable for our final meeting. I also had Geoff Pingree, my most-present cinema professor in the last few years (I've taken six classes with him, and I'm his writing assistant/teaching assistant in his First-Year Seminar this semester), Jeff Pence (one of the two instructors for the senior project class), and Brian Doan (I had never worked with him before, but he has experience with animation and short films from a pedagogical perspective) on my committee as well.

Despite my project being done and passed my personal standards, I was so nervous about this meeting. Only Brian had sent me some questions to ponder before our Thursday lunch meeting. I had no idea what to expect. I should have brought cookies to make myself more comfortable. Or soup.

We watched my film, and afterward I talked about my inspiration, influence, and style. Each committee member asked me questions about my process, visual choices, target audience, soundtrack, and pedagogical approach. They pulled out themes of nostalgia and play and imagination; they made me think about this project in broader terms. This short stop-motion animation is the first step of a larger vision to use real foods in playful situations to reintroduce interest in homecooking. Basically, I'm trying to legitimize my urge to play with my food, take photos, and make movies. I think my film is a good start in that direction.

As I was leaving, Geoff teasingly asked why I didn't bring soup to our meeting. I answered back in semi-seriousness that I felt that baiting my judges was almost as bad as sating them, and that I hope my movie did enough to satisfy their hunger. Yeah, I'm that cheesy. Cream of broccoli and cheddar soup cheesy.

We had our first screening on Saturday, May 15th in West Lecture Hall at 8pm. Cast, crew, seniors, friends, professors, all in attendance cheered for all the films seeing the light (dark) of day (night) on a big screen after a year of work. (Remember cinema screenings? They're my favorite part of reading period.) This was only the beginning, though.

Since the college's purchase and renovation of the Apollo in the last year, the cinema studies department has been gearing up to start working with a real movie theater as part of the curriculum. Step one in this process was getting our class into that building. That's right, our class had a second screening, the following Thursday evening, on the BIG BIG screen with the additional soundtrack of rolling bottles and people rustling in the old leather seats at the Apollo.

My classmates got all spiffied up, like it was a big Hollywood premiere, because, in all honesty, it was for us. We looked snazzy and bought popcorn and watched our movies on a real movie screen in a real movie theater. Ohhhhh yeahhhhh. It was AWESOME! 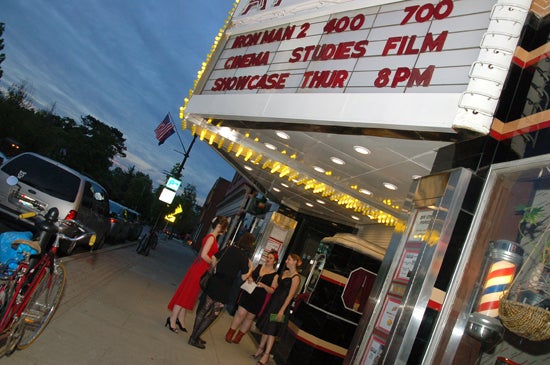 Look! We're on the sign! (Granted, our screening started at 9pm, but look!) 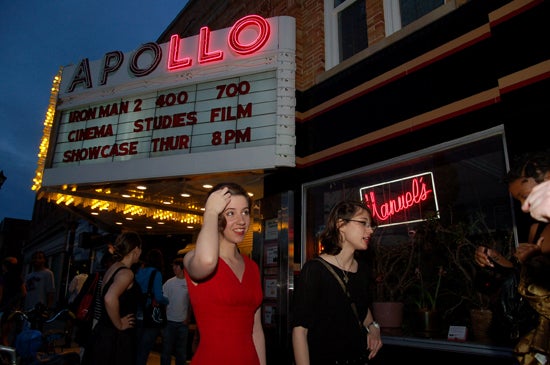 Alani, glorious makeup artist of awesome, inadvertently posed in front of the sign. 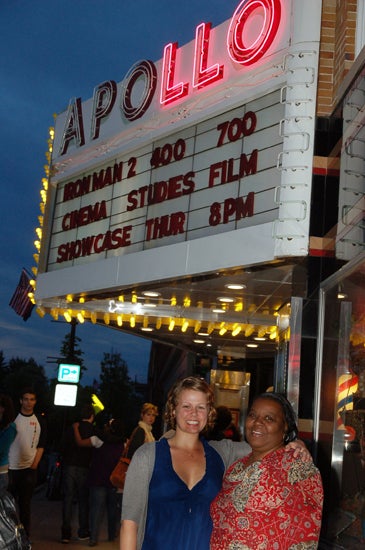 Theresa made a documentary about food deserts in Cleveland, starring Willa (pictured here with Theresa) and her family. 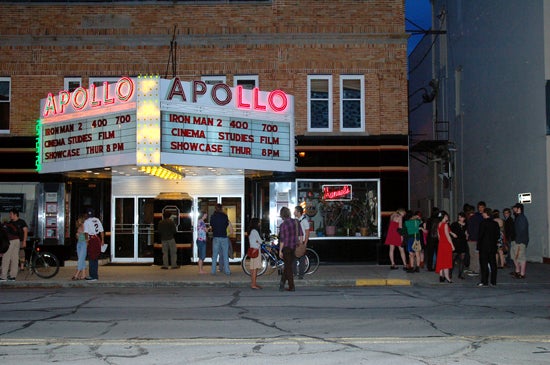 Our class waited outside before the screening started, amassing our posse before we entered the theater. 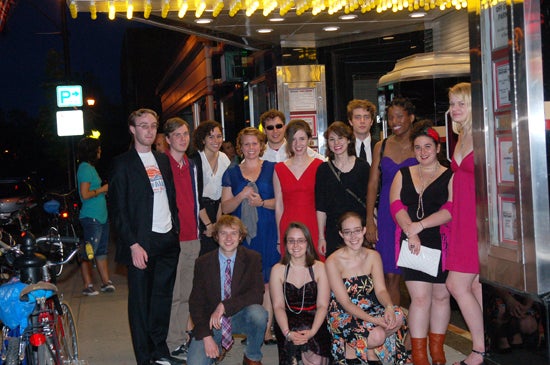 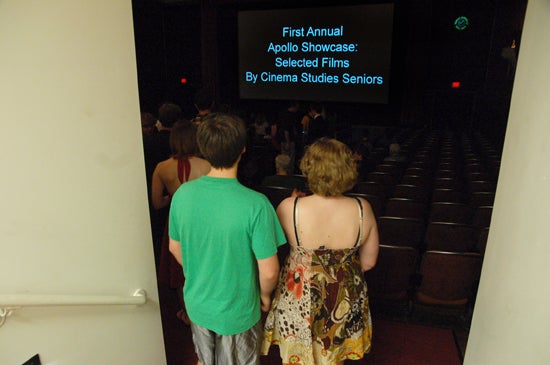 Look! We're on the SCREEN! 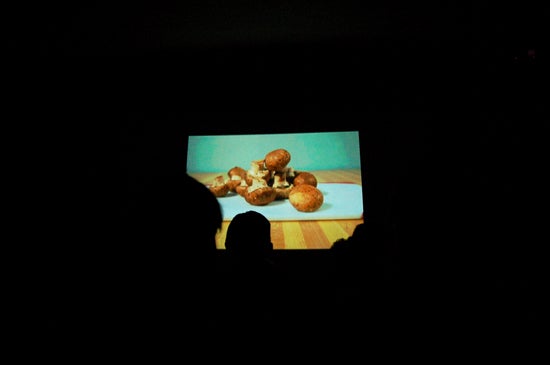 Look! I'm on the screen! A still from my film (the tumbling mushrooms) plus audience heads.

Congrats to all the seniors! Thank you, cinema studies! The Apollo screening was worth everything to us.

Your movies were all so great!
- fan

Congrats Ma'ayan!! I'd love to see the films - are they on-line? DVD?

I'm class of 80. I just found your blog because of the reunion email sent to alums. I went to the Apollo showcase and enjoyed the films, especially yours and Theresa's! I wish there had been a Cinema Studies dept. when I was there.

I'm interested in documentary and have done a ton of my own videoing but so far have only taken some workshops and edited one! (It's about a trip to our shtetl in Poland.) Looking forward to hearing more about the program and perusing your blog a bit more.