So I'm thinking about the whole Oberlin: Fearless campaign. I haven't seen much of it in awhile. After drawing some mockery, it led students to hold a forum on its effectiveness. If you type www.oberlin.edu/fearless into your browser, you will end up somewhere you have probably been before...which I find mildly worrying. The insinuation seems to be that we bloggers, as typical Oberlin students, are also emblematic of the Fearlessness that is meant to infuse all Obies.

Well okay. That's nice. It's nice to think that Oberlin is full of fearless people who will probably leave after four years being even more fearless! The question of course is whether or not we actually are that... This is what I was thinking about earlier this evening while trying to capture one of the new chickens my family got yesterday, in order to put her into her little house for the night. I got Olga fine (wouldn't you name your chickens too?) and didn't even freak out when she flapped and squawked, but Golda - not so much. When I went to one corner of the pen, she went to the other. And then on and on and on and on and on, a la Bugs Bunny and Wile E. Coyote. Guess who was who. 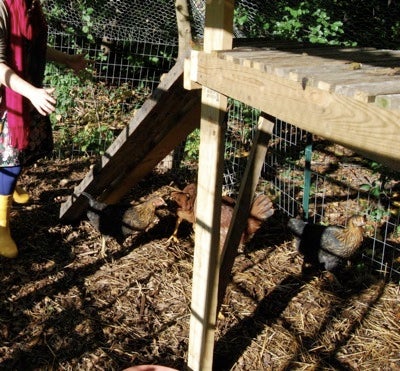 reaching out to chickens in happier times. photograph by the lovely sophia yapalater.

Then it started to rain. Actually pour. Now I was wet, ducking under the ramp to the henhouse, chasing a really awkward-looking bird that whenever I got nearly close enough to catch, I somehow could not bring my hands to reach out and grab. It was a small bird, it came up a little past my ankle. The most it could do was chirp. And I was afraid of it. Even after buying snazzy new work boots in preparation for a month of French dairy farming....and sheep are bigger than chickens. Really, quite a bit so in fact. The incident did not bode well for my future at all.

So, fearless? Yes, except of course for small harmless animals. And roadkill, which is even weirder, because they're totally harmless. And fire, which actually makes sense. Also kind of the rest of my life. Sex and the City 2 was scary - the part where Carrie and Big are married and he buys a TV for the bedroom and watches it all the time and she realizes they're boring. I'm scared of being boring, also of being married, and having children that cry all the time so you hide in the pantry and cry too, like Charlotte did. And of getting chased by an angry mob, like Samantha was. And of losing my passport in Abu Dhabi, which also (of course) happens in Sex and the City 2.

...so pretty much most things, then. Well, Oberlin, you have a lot of work to do.

But here's the thing: I think fearless people still have fears. They just deal with them. If anything happened this year, fears were dealt with. There was no way around it. Paper-writing is scary and gender-neutral bathrooms are scary and picking a major is scary, and other people are scary. Especially when you like them. Then the stakes are high, and you realize you care about places and people more than you planned to, and you feel rooted more than you maybe ever wanted to. You get that Holly Golightly dilemma, wanting to be a no-name slob with no furniture and absolutely no ties, and having to admit that you actually kinda love this tiny Ohio town and the people inside of it. They're nice. They tell funny stories and know cool things, and they let you into their lives and care about yours. They become Important, and less scary.

And as for the ones who stay scary, well, whatever. There has to be something that keeps you on your toes. Would anyone actually want to be truly fearless? It would probably suck. (Hence the title of this blog post.) Well chasing hens sucks a little bit too. But it makes you pretty tough, so whatevs.

Before I came to Oberlin, there were lots of things that scared me. There are still lots of things that scare me (finding a partner at contra dances! cooking dinner for my whole co-op! doing fieldwork for a month in a tiny Italian town where no one speaks English!) but I do them anyway. This seems to be a general trend among Oberlin students, and "fearless" is exactly the wrong way of summarizing it: we're just exceptionally good at overlooking our fears.

That said, trying to sum up Oberlin's gestalt in a single word is one of the scariest jobs I can imagine. So I have a lot of sympathy for the poor folks who came up with "fearless".

I love this post too, Abby: the image of you chasing a tiny chicken in the rain is hilarious.

Note, however, that the post's theme is somewhat out of date. The Fearless campaign is dead. Kaput. Finito. It no longer exists in the college's approach to prospective students. Just thought you'd like to know...

hahahha oops! i feel old now. well, thanks david for letting me know!

It's funny though, sometimes our fears are not realized until after the fact. Like, I can be scared of the dark most often, but I can't sleep without it being totally dark; I don't realize my fear until I make myself aware of it or just plain after the fact. :/

I think fearlessness would be cool if we think about it on a grander scale:

1. Not being afraid of anything would mean we would try everything and get the most out of life. We have only one, so why not?

2. Thinking in terms of other things that are 'scary' yet not typically 'scary' like asking out a boy you like could make for a different life altogether. (After all, how many of us are filled with the 'what ifs' of 'opportunities' that just 'got away'?)

I know it somewhat deviates from the original intent of the post, but kind of not: if we don't fear the world or new environments, we have no reason NOT to enjoy it more! Just my opinion though.