This summer, I did something I've been meaning to do for the past few years: learn to ride a bike. Yes, I am proof that not all liberal arts students bike everywhere--or at least, I have been. That's changing now. 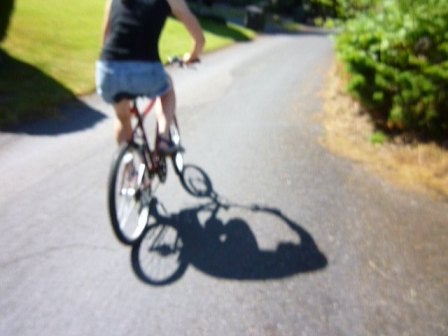 All photos are taken by my brother, Blake.

I did nearly learn when I was little. I got a bike when I was four and tooled around on it a lot. I would go zooming around the driveway and garage with my basket full of grape jelly sandwiches, or ride along when my parents went for walks. They gradually raised the training wheels until they only touched if the bike was tipped sideways. Looking back, I think I only used them for starting and perhaps very sharp turns. Regardless, when I was eight and my parents suggested taking them off entirely, I insisted on riding on grass to minimize my chances of injury. We went down to my school's field and I attempted to ride. Needless to say, I did not do very well, but I put it down to the lack of training wheels rather than the grass. I never really got around to trying it again, and shortly thereafter, I outgrew the little bike.

Now, of course, there was a catch-22. I could only learn to ride if we got a new bike; we could only get a new bike, however, if I was going to get some decent use out of it. And since I didn't know how to ride, I wasn't very interested. Besides, where would I go? There wasn't any place I particularly longed to be able to go to often. Perhaps if I'd realized that a bike would let me explore, that I could go to places I didn't know about already, I would have been more interested--but maybe not. I would probably rather have been reading, or going for walks.

That was another thing: I like walking. If I'd wanted to go places more, or on shorter notice, I probably would have learned so that my parents wouldn't have to chauffeur me everywhere, but I was kind of a homebody and could manage what was important on foot. (This also partly explains why I didn't get my driver's license until after graduation.) I could walk to my high school--Dad always dropped me off in the mornings on his way to work, but I usually walked home. In fact, I doubted I could manage to ride a bike while laden down with a heavy backpack, stray lunchbox, and unwieldy violin, even if I wanted to.

I still felt that riding a bike was something I should know how to do, so I took Mom's bike out a few times one summer. Mom's bike was specially fitted for her at a bike shop. However, they screwed it up--it's too big for her.

I'm four inches shorter than she is.

The attempt didn't work out so well.

I went away to college, still firmly if somewhat foggily determined to learn how to ride a bike sometime. I got pretty busy and never got around to renting a bike from the bike co-op, though I did get myself a helmet last fall. While I do have lots of places I like to go in Oberlin, everything is easily accessible by foot (the town is very walkable), so learning how to ride a bike was not a necessity.

But this summer, at last, I have time and access to a reasonably appropriately sized bike. My little brother, Blake, has more of an interest in zooming around the hills and trails around our house than I ever thought to have, so Mom and Dad got him a bike. It's a little small, but if I jack up the seat I can manage it reasonably well. 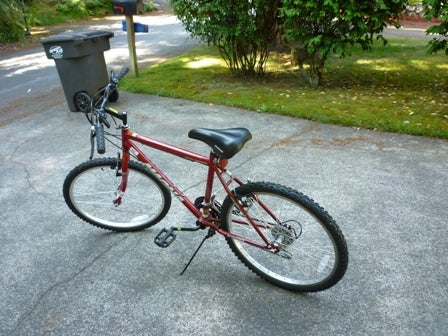 The day I got back, I took it out and wobbled nervously along our dead-end street, Blake scootering along and offering advice. I wiped out several times, or rather, I mastered the fine art of leaping clear when I felt the bike going over. After one particularly dramatic episode, in which I swung off the seat just before the bike hit a neighbor's recycling bin, Blake jokingly asked if I was learning gymnastics. 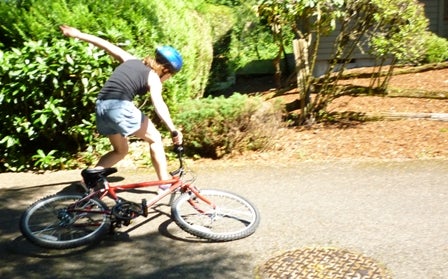 By the end of the session, I was able to go for maybe 150 feet in a straight line on a flat surface, though I had a tendency to panic on the curves of our cul-de-sac. I figured this was pretty good for someone with three hours of sleep under her belt. 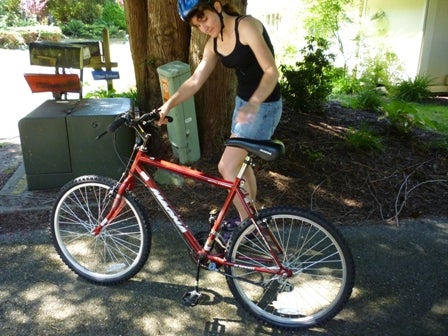 I took the bike out again several weeks later, determined to make better progress. The previous attempt's lessons stuck with me--I was doing better from the start. Blake came out with me again, giving me encouragement and advice. This time, I'd given him my camera, with instructions to take pictures and video clips if I did anything interesting. He did so. He was a great sport. (I think he was a little disappointed I didn't have to bail out dramatically anymore, though. He would've loved a picture of that.)

Here are some of the videos he took. He really was wonderful about it, even running alongside me to take pictures or video. I didn't ask him to do that; he did it by himself.

By the end of the morning, I was able to go around the cul-de-sac, which involves a curve on a hill, without panicking or crashing into anyone's mailbox. This modest accomplishment still pleases me greatly, and if it ever stops raining here (Washington's summers are supposed to make up for the rest of the year; apparently 2011 didn't get the memo) on a day I'm not working I will try it again. My next goal is to be able to turn around without having to stop. I can turn with a curve on the road, but I seem to lack the confidence to do it on my own.

Blake is sure I can do it. Hopefully soon I will be able to zip around the trails like him. I'm certainly having fun. 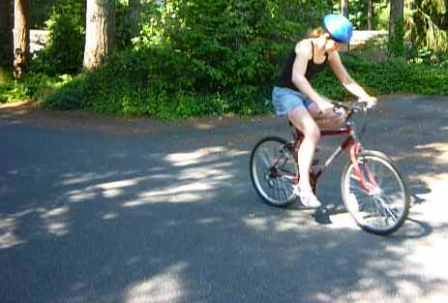 I've been thinking about learning how to ride a bike before college all summer, and yet I still haven't. I think this is a sign! Then again, you wrote that Oberlin is perfectly walkable.

Oh yes, you can get anywhere reasonably fast--it's a small town--and there are sidewalks everywhere. However, there are also a lot of bike paths. I walk along sections of them sometimes, but there's a lot more to explore if you have a bike--they're apparently pretty extensive. Also, if you'll be going from north campus to south campus a lot, or if you'll be living in Tank, faster transport might help. I am lucky enough to be located close to the places I frequent.

Good for you! I, too, had a childhood of not knowing how to ride a bike. I fell off my bike with training wheels when I was about 6, and was afraid to get back on it; my bike sat gathering dust in the garage for so long that my mom gave it to my younger cousin. I spent the rest of my childhood trying to hide the fact that I didn't know how to ride a bike, faking a hurt leg, pretending that my mother was calling me . . . Finally when I was 40-years-old I finally taught myself how to ride. That was 10 years ago and I still couldn't ride a bike on a busy road or on uneven terrain or even down a hill :\ but I was SO proud of myself the day I learned. You're never too old to learn how to ride a bike!

I don't think they know that you're reading this, Blake (it's my blog, after all), so don't be hurt. Your photography was excellent!

@Diane: At least I am learning before forty! Good for you.

I found being able to turn sharply enough to do a u-turn in the road if I wanted to was pretty much the hardest thing to learn. It helps if you start off opposite a driveway, so that if you don't turn hard enough, you stay on pavement instead of heading straight into somebody's lawn.

Also, can we have some of your rain? It hasn't rained in Rochester in at least two weeks and all the grass is turning brown and dying.

Hah, I'll try that. There's also a few spots where there's a parking area just off the street, and if no one's there I can use those.

I'd rather have the rain than the constant heat wave everywhere else is having! But you can take away the drizzle-free gray--be my guest.

What is it about brothers + bikes? I didn't realize the total and complete pleasure of riding a good bike sized for me until Ben gave me a bike for my birthday.

Congratulations on your progress! I'm glad you're learning, even if you're not going to use it all the time; it's a totally valuable skill.

I am a huge fan of your photography!

LOL I sound like I'm three years old on vid. 2, don't I? And Tess, I know what you're thinking, so don't say it. If you do, no more Christmas presents for you.

I have NO IDEA what you think I'm thinking. Please do not withhold presents.

Everyone sounds weird when recorded, especially to themselves (because we're used to hearing our own voices through the bones in our head; things sound different on the inside), and especially when it's recorded while they're running with non-professional recording equipment. I think I sound strange too.