My name is Emily and I am a chronic list maker. I've created dozens of word documents with titles like "books to read this summer" or "things to do at home." Any notebook I've ever had undoubtedly devolves into a place to write to-do lists. I even have special "Don't Forget" post-it notes that cover most of the pages of my planner. And of course, there are my mental lists, which probably take up a ridiculously large portion of my brain. Usually, my lists work out well. I'm pretty forgetful, and my lists keep me organized. However, sometimes my list-making habit turns to the dark side. When I'm stressed or in a deep funk, my lists tend to take up a larger and larger chunk of my brain and when I spend a lot of time making mental lists of all of the things I need to do, nothing ends up getting done. 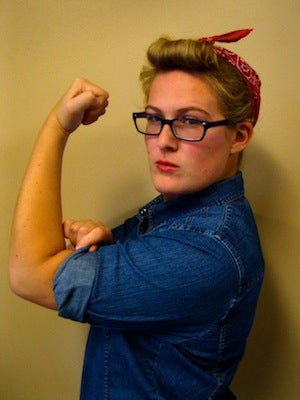 This year, I decided to go as Rosie the Riveter and while I didn't trick or treat, I did eat lots of candy and take silly pictures with my fellow Kahnfucians (aka the residents of Kahn's second floor, north side... it's a long story). 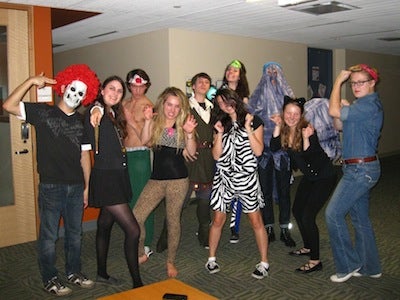 3. A Capella Study Break - Traditionally, Study Break takes place during the week of midterms, but due to some pretty intense rain on the original date, Study Break ended up happening last Wednesday. Study Break was straight up awesome. Not only did my girls in Nothing But Treble do a fantastic job, I was blown away by all of the other a cappella groups. There are videos of the Trebs' songs on our Facebook page and I'm pretty sure that Ma'ayan recorded the whole concert.

4. Next Semester's Schedule - I met with my awesome advisor, Brian Alegant, and (fingers crossed) figured out a few possible plans for my schedule next semester.

5. Winter Term Planning - I figured out what I'm doing for Winter Term! My lack of Winter Term plans was stressing me out, but as of last week, I am officially taking the "Yarn to Garment" class with one of my bosses, Betsy Bruce. I'm pretty excited to learn how to how to weave on a real, full-size loom since that's probably the only fiber art I haven't tried. I will be on campus, which wasn't what I had originally had in mind, but it sounds like a lot of my friends will also be around, so it should be fun.

6. María llena eres de gracia - Last week, my Hispanic Studies class watched a pretty fantastic movie called María llena eres de gracia (or Maria Full of Grace), which centers around a 17-year-old girl named María who becomes a drug mule (my description doesn't do this movie justice, but you should watch it anyway). If that's not awesome enough for you, my class also got to talk to Don Orlando Tobón, a producer and actor in the movie whose real-life job is helping Colombian immigrants find work and places to live in Jackson Heights, New York. As one of my classmates said, Don Orlando is a saint - not only did he take the time to answer all of our questions, at the end of our conversation, he remembered all of our names.

7. Treble Ensemble concert - I performed in my first "official" Oberlin choir concert this weekend with Treble Ensemble. I think that the performance went pretty well and I was very impressed with the College Choir. It's great to go to school with so many talented singers.

8. Voting - I exercised my sacred democratic right to vote this morning and it felt great. It took me a long time to decide whether or not to vote in Ohio (I was already registered to vote at home), but ultimately, I think that I made the right decision and I was glad to be voting on such important issues. 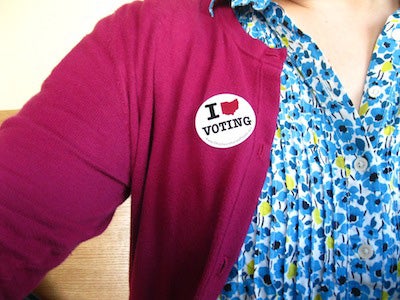 Well, that list ended up being longer than I had anticipated (typical), and although I could keep going, I think that you get the idea. Sometimes when the big picture is looking pretty stressful, all I need to do is look at the little things and remember that everything will turn out all right. And if that doesn't work, some Rodgers and Hammerstein will always make me smile. Here's hoping that my funk ends soon!

My grandmother was a Rosie Riveter! Your costume definitely did the icon justice!

From Yarn to Garment is awesome and so is Betsy. You're going to have a completely excellent time.

My friend Lily was Rosie the Riveter last year! We did a World War II theme; to name a few, we had Churchill, FDR, Stalin, de Gaulle, and I was, uhm, Anne Frank. (In my defence, I caved into peer pressure on that one, and also because my friends had taken most of the good ones.)

I forgot to bring it up last night at tea, but Sarah was in From Yarn to Garment last year. She guest blogged about it for me; you should check out what she wrote and/or talk to her. She definitely loved it. (I think her dress was part of the display at the Winter Term Fair this year? It's pretty rad.)

Ma'ayan: Thanks! That's so cool about your grandmother. I'm really excited about winter term.

Ida: I've actually already read that post! It was part of what convinced me to sign up for the class. For whatever reason, I didn't realize that it was Sarah that had written it when I met her!

You have a lovely blog! I am actually here because I am trying to get in contact with Nothing But Treble. I am the PR chair for Rhythm and Roos, an a capella group at the University of Akron, and we'd like to invite NBT to perform at one of our concerts! Could you please get me in contact with your PR chair or president?