I love pranks. Especially at the year's end.

My first two years, a group called Oberlin Street Art executed pranks across campus. My favorite were the Mario Boxes. For me, old video games generate the nostalgia most people reserve for Legos, Rugrats, and home-made pancakes. Mario, Tetris, Myst, Street Fighter, Sam and Max, Crash Bandicoot, Parappa... that's childhood to me. And finals, through its mind-altering, sleep-depriving effects, can help increase one's appreciation and self-identification with childhood.

And during finals, some brave souls hung Mario boxes across trees on campus. Inside some of them were giant cut-outs of stars or mushrooms. 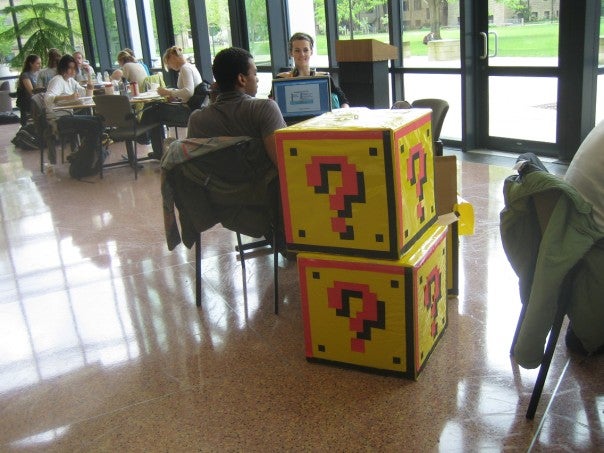 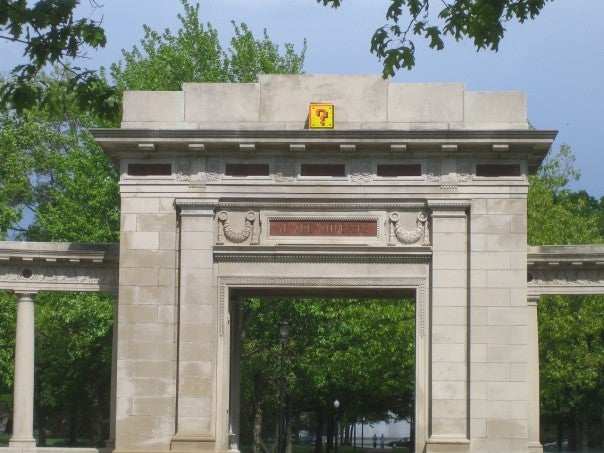 At the top of the Memorial Arch! Photo Credit: Yoshi Schonborn. 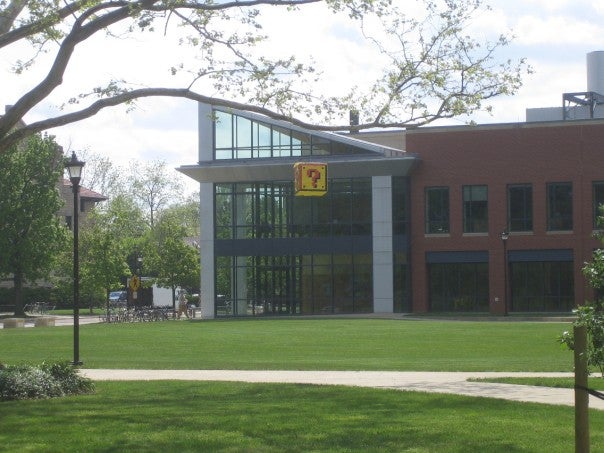 This semester, something similar happened, with folks hanging a little pink bike from the big tree in Wilder. There was something sad, yet silly about it. Apparently, the bike's name is "Slumber Party", written all over her pastel pink and purple body. 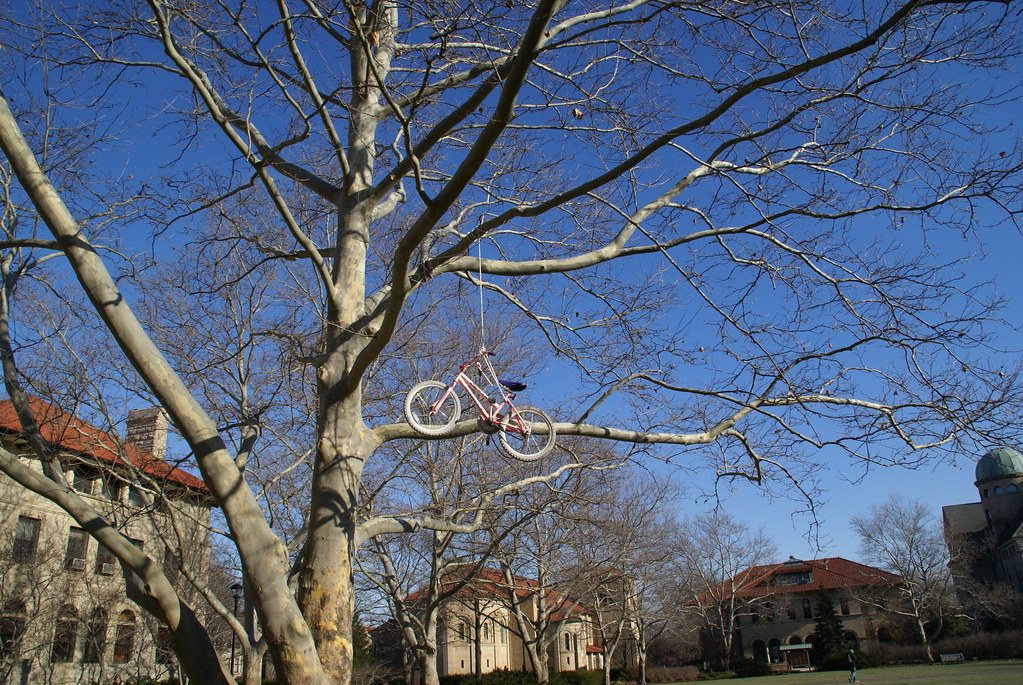 The first sight to see, crawling out of Mudd Library at terrifyingly late/early hours. 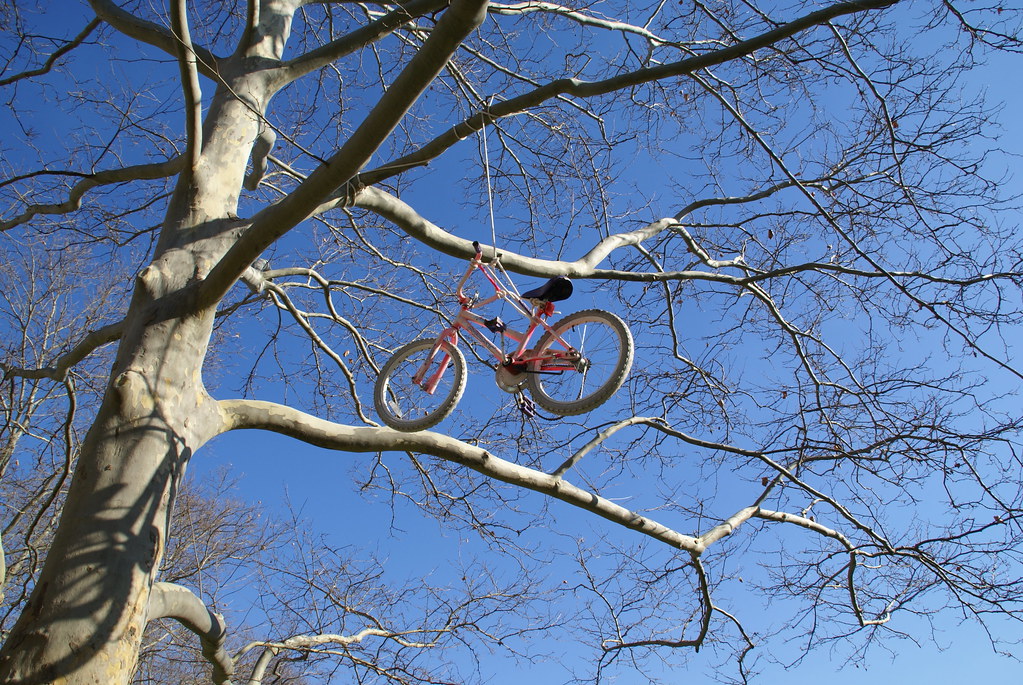 I wish I had a flying bicycle.

There are more pranks than these, obviously, but these were the timely (read: finals-based) ones.

I also love secret places. Something about shadowy attics and abandoned amusement parks fills me with excitement. The most interesting ones are the ones you've heard about, but never seen. Hiding places. Rooms of requirement.

Oberlin satisfies that really well. There's plenty of places around here that I know about, but just haven't found. Thanks to my summer running club, I saw lots of trails around the southern half of campus (Joe probably knows all of them already).

One of them is the Pottery Co-op. Since freshman year, I've known we have one. I've seen the bowls; I've had tea in their mugs. I've mentioned it on tours. But if someone asked me to point it out, I'd have no idea. No clue.

This is where Kris comes in. Kris was in Storytelling Exco last semester. Much as I love the abstract joy of finding and sharing new narratives, I really love the exco (and all excos, really) because they let you connect to people you wouldn't ordinarily get to know. Storytelling exposes people's insides, their spiritual interiors. Kris's ur-brain holds soft guitar music, bright colors, rugby, falling down, and all the sunlight southern California can create. And even though we didn't get to hang out too often last semester, it was easily to tell that Kris is one of the most amazing people ever.

One of my New Year's Resolutions is: "You know those cool people you always wanted to get to know but never did because you never had spare time? YOU HAVE NO EXCUSE NOW."

(Said list also included such winners as: "Write like it's your job. Cause it is." and "Have adventures. Otherwise, you may as well be dead." and "Stay employed," with the addendum, "Do not make Ben angry. You won't like him when he's angry." and "Don't be a jerk. Don't be an idiot." and "Optimize. Love is not the only reason to do things, but it is the best reason.")

So, as well as other adventures, Kris took me to the pottery co-op, as, for some reason, she learned how to do pottery in high school. She gave me a complete tour and helped me find the place: a cottage, tucked away in plain sight. 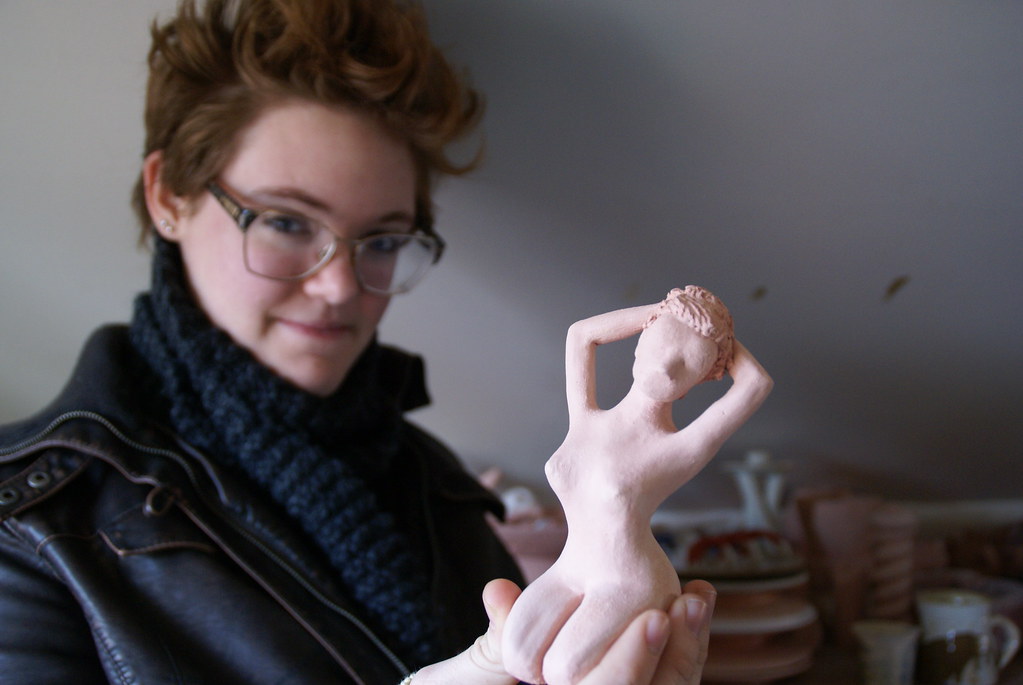 Kris's tiny lady, not yet glazed. 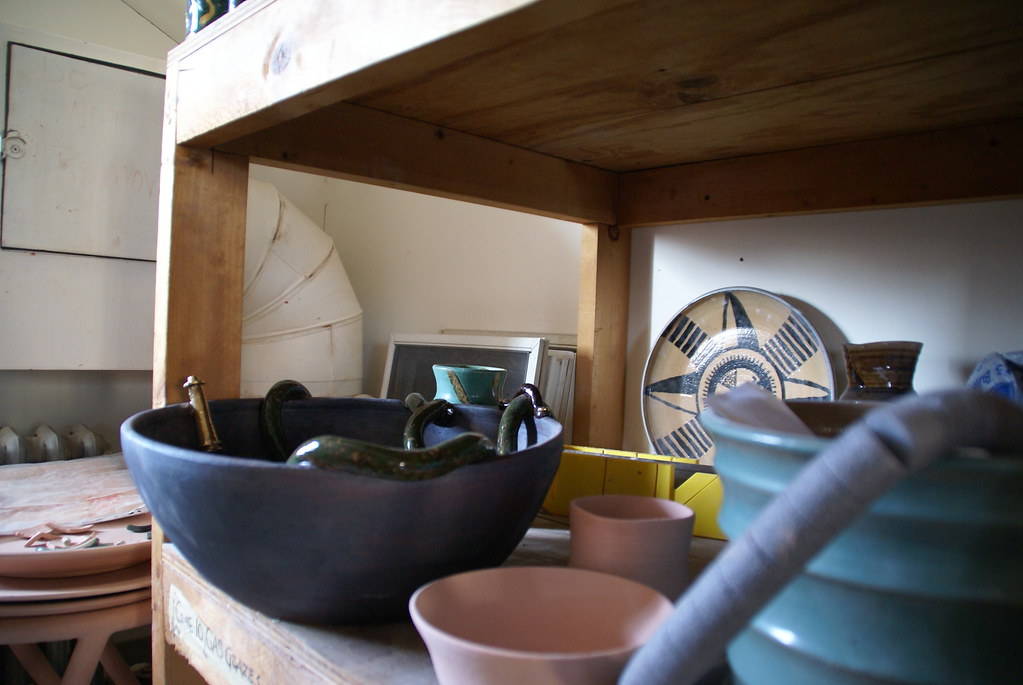 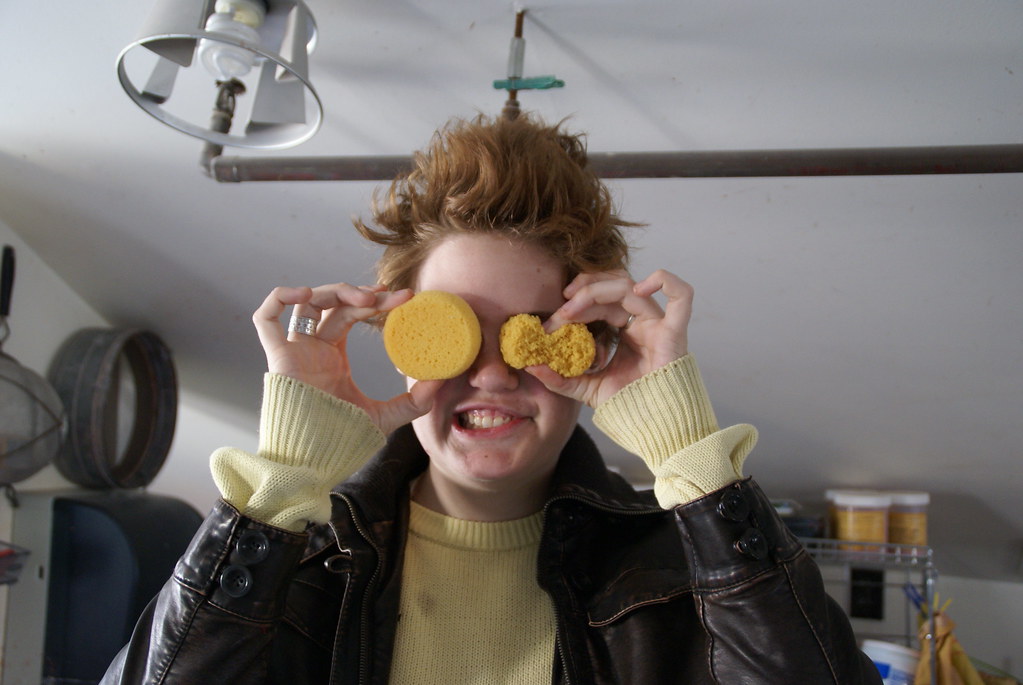 For a small fee, you get unlimited clay, use of the facility, including kilns, glaze and lots of funky tools. 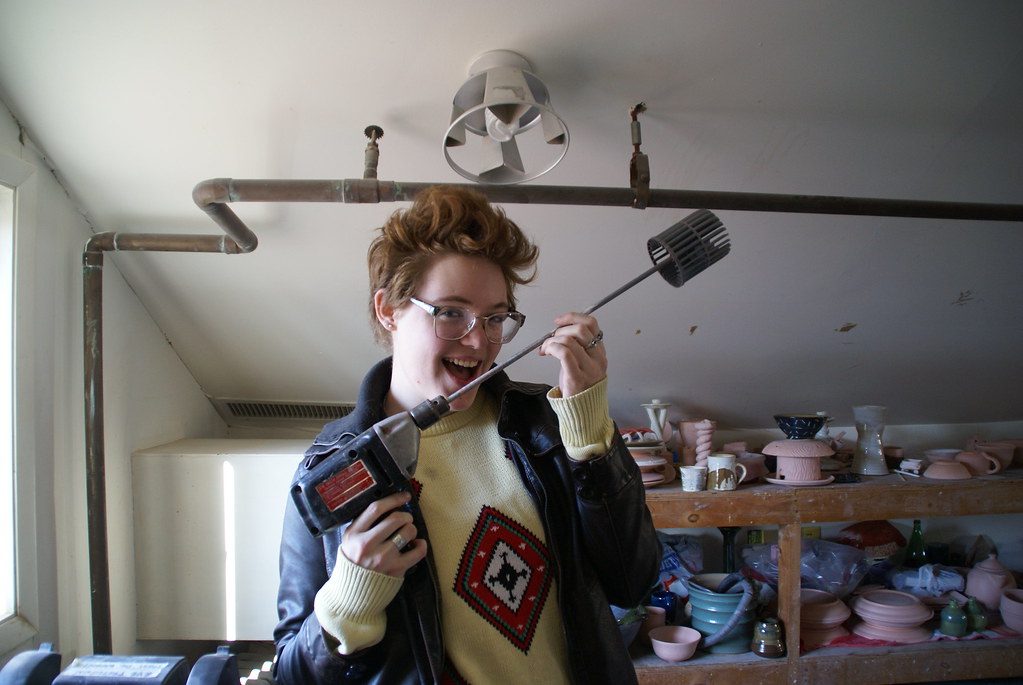 I have no idea what this funky tool does. Kris sees it as a ray gun.

And while we're here: Merry Christmas! Happy Holidays! Thanks for reading! I made a mix for my various Obies of bands that played here (Fall 05 - Spring 09). If you ask nicely, I'll send you a copy.

Myst reminds me of my childhood in that I thought about it most when I was younger, but /man/ that is no kid's game. I played some Mario on Sunday though.

Ratatat is one of those bands that I most regret having passed up the opportunity to see live. They were playing at my favorite venue, but I had a geometry test or something silly, so I didn't go. Regrets!

The holiday spirit has inspired me to post a link to the performance of the tMG song you included in your mix, Love Love Love, from when they played at the 'Sco on March 31st of this year (taping credit goes to a WOBC DJ whose name I cannot recall). If this is improper, I won't object to it being taken down, though the band isn't in any way against bootlegs of shows being passed around, I promise. A Christmas eve present, if you celebrate the holiday!
Link: http://www.sendspace.com/file/let5c4 (this is just that one song)

Set list from the entire show:
Short Song About the 10 Freeway
Autoclave
Love Love Love
Cobscook Bay
Fall of the Star High School Running Back
Absolute Lithops Effect
Dance Music
In the Craters on the Moon
Raid On Entebbe
Old College Try
Woke Up New
Spilling Toward Alpha
Alpha Negative
Surrounded
Steps Columns Pillars
Emerging
This Year
Encore:
Color In Your Cheeks
How to Embrace a Swamp Creature
No Children

Happy holidays, Aries & everyone else!

Mix please, love. It seems similar to one of my mixes. :)

Wait, have you been to the abandoned amusement park nearby-ish? I have, it was awesome! You should go, if it hasn't been torn down yet.

I would love a copy of that mix! Although I'm in China now, and shipping ain't cheap. Perhaps a U.S. address would be more practical? Or if only there was a way to procure music online...