As it's been for several years (at least in my memory and presence at Oberlin), April is host to several All Roads Lead to Oberlin days here on campus. These are admitted student days, filled with tours, meals, class visits, and otherwise a whirlwind Oberlin steeping that serves as the community and cultural introduction (and in some cases, celebration) of one's college acceptance to Oberlin.

They're quite fun; I've attended several of the events for the past few years, meeting students and parents who know me from the Oberlin blogs, or are simply curious to hear from a student turned recent graduate about what this place can be for a brand new college student. We've even started expanding the All Roads programming to the digital space, specifically, rethinking the student panel discussions that occur here on campus for a virtual audience. (And yes, if you're reading this in April 2015, the two panels already happened, and we still have one panel to go!)

A student joked in the Oberlin 2019 group earlier this month that while the metaphor "All Roads Lead to Oberlin" is sound, it's technically challenged, since Oberlin is hard to get to from where they're located. Yes, smart new Obie, it is a metaphor, but I'm going to take this literally for a moment as well.

Perspective: I grew up in a small farm in Kentucky — granted, it was near other Oberlin alums, so in a sense, my local roads did lead me to a version of Oberlin even if it not the actual spot I'm living in now in northeastern Ohio. This past month, I was back in the area speaking a conference at the local university I spent the most time at as a kid. The thing about local universities in rural areas is that while they're situated in such a way that commuters can get to and fro easily, it's more challenging for out-of-town visitors to get there. In planning my trip, I looked at the travel instructions provided on the college's website, and all they had were highway numbers and street names, no airport information. (For the record: there are two regional airports one can fly into in order to get to Bowling Green, Kentucky, and the most efficient way is to actually fly in and out of Nashville, Tennessee, and then drive over an hour north to the campus). To get to my family's farm, we're between 30 and 40 miles from an interstate (I-65 and I-75, respectively), and our closest regional airport was in Louisville, which was around 90 minutes away by car.

Contrast: if you're trying to get to Oberlin from either the east or the west sides of the country, both I-90 and 1-80 have exits six miles north of Oberlin, and if you're heading north/south, I-71 is 30 minutes south of us or 34 miles north of us. Cleveland Hopkins International Airport is our closest airport, which is precisely 30 minutes northeast of Oberlin when the weather and roads are good. In terms of size, I think of our airport as a regional airport, but we do fly internationally, and we're around an hour flight to most of the cities on the east coast and most of the midwest (I can speak from personal traveling experience this past year, and that hour-long flight is a great thing - unless Chicago is having terrible weather). When you enter Oberlin, on three sides there are beautiful wooden Welcome to Oberlin signs, and let me tell you, my heart still leaps when I see them, even if I've only been out of town a few days. For most students, those three signs mark the edge of our bubble, and we travel these roads because they deliver us to and from Oberlin, our home, our college, our life for four years.

Something interesting happens when you graduate, though. Before, when feeling like this was the only spot in this area of the world, now, Oberlin becomes a beacon for traveling souls. It is a destination along the road to somewhere, and once you're on your way, you'll make sure it's on your way to wherever you're going.

I am asked regularly by visitors (and quite a bit from my parents, actually) if I am lonely staying in Oberlin so many years after graduating. There is an inherently loneliness when you work on a college campus, since the student population turns over fully every few years and yet those who work here usually remain here beyond that time. I would not describe my situation as lonely: like I mentioned above, once this place has become woven into your own tapestry, these threads always exist. In the past five years, I've seen more Oberlin people (and quite happily, people who went from faces I knew as a student to true and wonderful real friends in addition to continuing to develop the friendships I had in college) taking a brief respite here in town while physically or metaphysically heading somewhere else in their life and in the big world, far far more than I probably would have managed to see if I traveled to various cities and saw Oberlin people there.

Since graduating, these people have passed through Oberlin on some leg of a journey:

Harris's sister and dad drove through a few years back. We spent some time together in the newly renovated upstairs Feve space within 48 hours of the space reopening. Harris, too, has popped back into town on either side of world travels to make sense of his belongings and to dance the weekend away during Dandelion Romp. Romp is actually a weekend in which Oberlin is a destination for alums, and I've happily seen such friends as former housemate Sneha, former Harkie housemates Ardea and Oliver, former tangential Foodshipper Aaron, our sweet genius Nathaniel, and oh so many more great people as a result of contra dancing weekends. Ida and Griff were back in town for Romp this year, and I saw Peter from a distance during the Obertones show on Saturday night, too.

My friend Anna lives just south of here in Columbus, and decided to pass through for Feve brunch this weekend. She and I have a traditional photograph we replicate in front of Talcott Hall. We first took this photo four weeks into our first year here (2006?!), and took it again when Anna visited in 2012, then again in 2015. We're going to do this as long as we can swing it together! 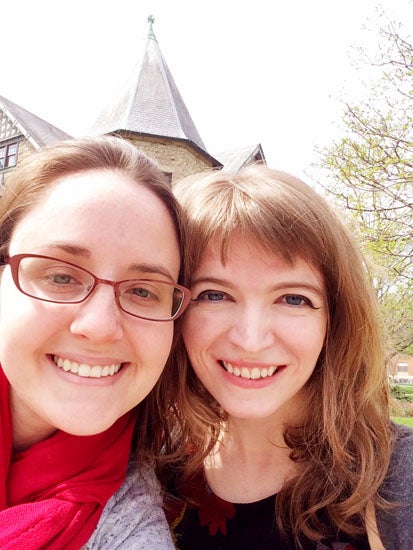 Anna and I took selfies before selfies were a thing.

I've seen Allison several times, on either side of her Watson fellowship, during our class reunion last May, and this April, during an education symposium that prompted several alums of the SITES program to return for talks and panels. She and I had some classes together at Oberlin, and within 48 hours of her arrival, we had a car trip from the airport, some (accidental) time working together in Mudd that segued into a lecture and then filling our faces with Agave tacos.

Following the completion of his first job out of college, Patrick roadtripped from DC back to his hometown in California, and paused for a driving break and snoozing break on my couch. Anna, between destinations of DC and Chicago, has graced my guest room several times, including once while receiving the Community Historian Award from the Oberlin Heritage Center. Miriam and I have had farmers market adventures together and cooked upon her return to Oberlin. Sandhya took a brief respite between leaving her first job and second job by visiting Oberlin.

Rusty and Ky always tend to venture to Oberlin when visiting family in the Cleveland area, and we've had long sprawling conversations on my porch and couch, depending on the season. Before moving to the west coast, Michael would venture down from Detroit every so often, and when driving down to visit family in the south, would tend to pass through. Amanda sometimes just shows up on my doorstep, and then we drink tea and walk around campus for hours, reminiscent of our late-night conversations in Mudd or while making dumplings.

Last year, I briefly hosted some friends of a friend as they headed to Chicago and points north. Oberlin was the halfway point on their trip, and an evening later, I'm now happy to say that we ARE friends. I saw both of them again briefly during the LaunchU pitch competition this January, too. LaunchU has also brought back a number of my classmates as participants and showcase winners since the beginning of the program, including five 2010 alums during this year's event: Cole, Joey Matt, Andrew, and Ahmad (the first three people were showcase startups — Cole was last year's LaunchU winner, the final two were pitch competition participants, and LaunchU startup grant and social impact prize winners respectively).

Oberlin is not necessarily a destination, but a stopping point on the roads of our lives (hey, that would probably make a halfway decent soap opera). After graduating, your reasons to come back to Oberlin become vital. But in returning to campus, you can't go back to what you did here in full. That's okay, though. Nostalgia is a dish best served warm, with a dollop of fond memories on the side. Oberlin is no longer the main dish, but a part of a healthy life diet.

I'll see you when you're passing through, probably over some tots at the Feve - a key part of a balanced Oberlin meal.