I'm smack in the middle of the second round of my ExCo, Learning to See: My Camera and Me. After having eight totally awesome students to kick off the class last semester, I didn't think it was possible to get any better, to find another set of kids who were as interested in photography and as driven to explore the potential of their cameras and their creative abilities.

Well, I did. I found eight more students who have been constantly knocking my socks off in terms of the photos they have been creating and what they have to say about their cohorts' creations. They are all freaking great. We talk photographic philosophy, technical specs, constructive critique, and just generally everything visually cool that's under the sun. We exchange emails about cool things we referenced in class. Sometimes we go on photo walks. Sometimes we ditch class to put a technique we discussed into action.

Well, it's not ditching class if it's in the middle of class and we're all implementing stuff we just learned in class. Last week, someone asked a question about light painting. After explaining it, everyone echoed the same "COOOOOOL." sentiment, and after McCoy proudly pulled out the tripod he had picked up over break, we all decided to head outside King and see what we could "paint" on the world around us. 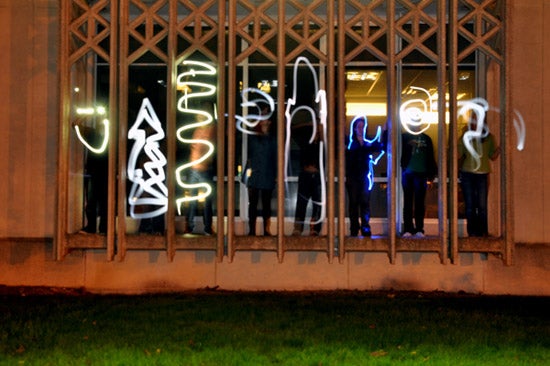 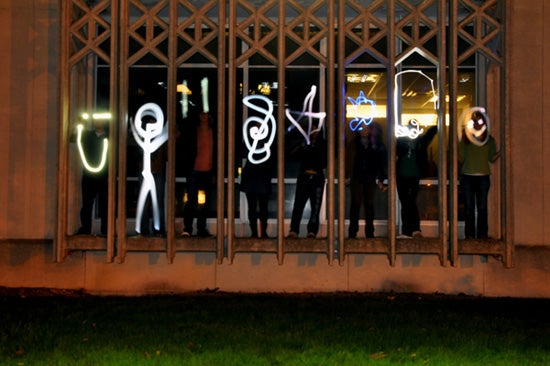 We first experimented with what painting with light actually produces in photos. There are exactly eight little spots in the King building facade, which is just perfect for my class and for the framing of this photo.

Then we each took turns writing our names. Cursive won out over print, 5-3. 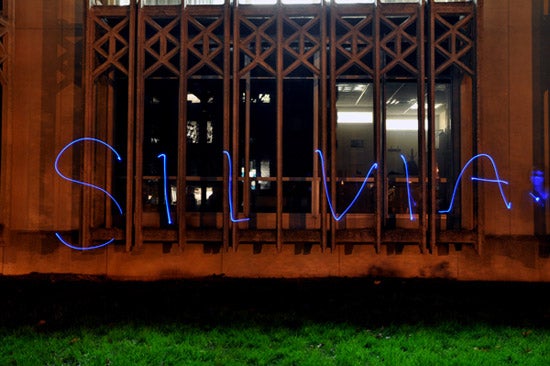 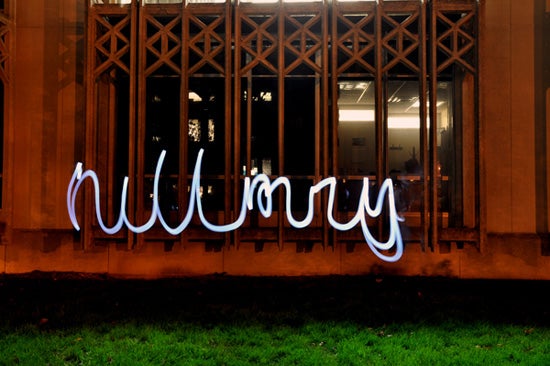 Hillary was our first exploration into cursive writing. 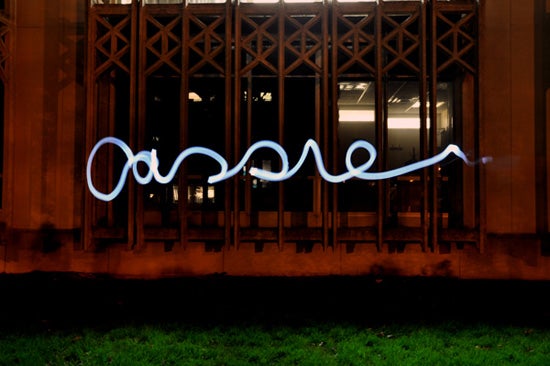 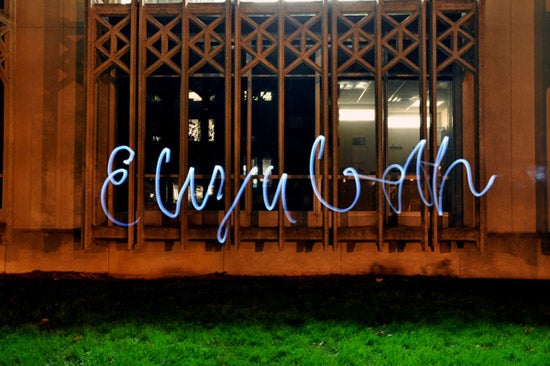 Elizabeth's name was so long that we had to up the exposure to twenty seconds for her to get all the letters in. 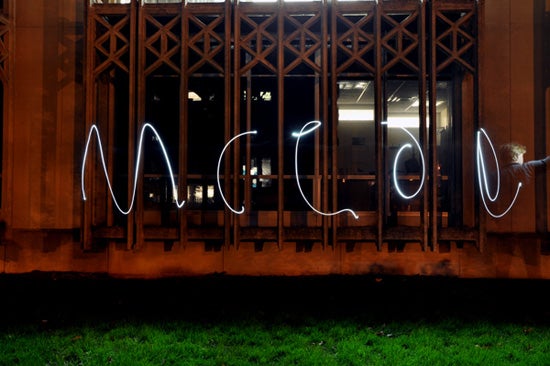 McCoy reversed his Y, but made up for it by posing at the end. 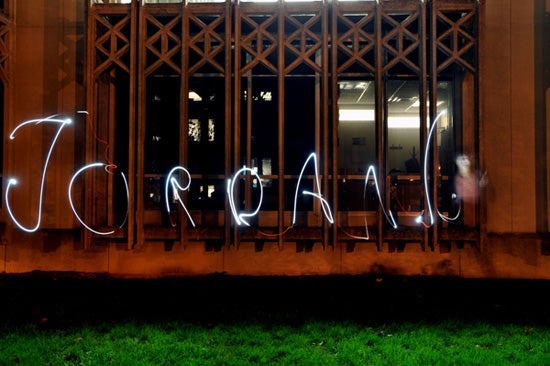 Jordan also did a brief pose at the end. 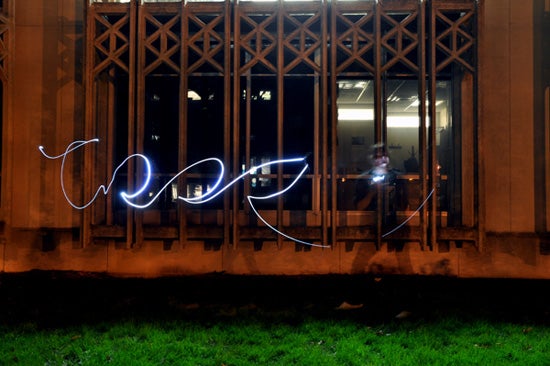 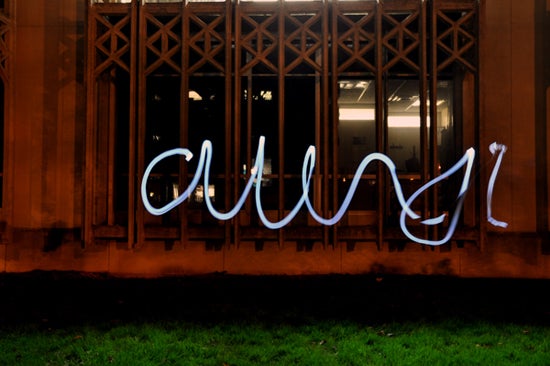 For those of you who don't know what light painting is (also know as light graffiti, long exposures, extended exposures, and even more names than that), here's what's up:

Based on that, we used the fact that the camera was taking several seconds to take the photo to our advantage and decided to "paint" with the light we had available. Whenever a camera sees light, it'll capture it (in short, that's how photography works).

We had about 10 seconds in which the camera was taking the photo to do as many lines and doodles with flashlights (or cell phones or iPhones) as possible. With the name photos, people turned on and off the flashlights to make separate letters, or kept the light on and swooped it around to make cursive.

Super awesome, right? Right. This is how awesome my class is. We just talk about these things all the time and then we go out and DO them, too. I know you're jealous, but I guess you'll just have to visit or take my class or something to fulfill this gap of coolness in your life. 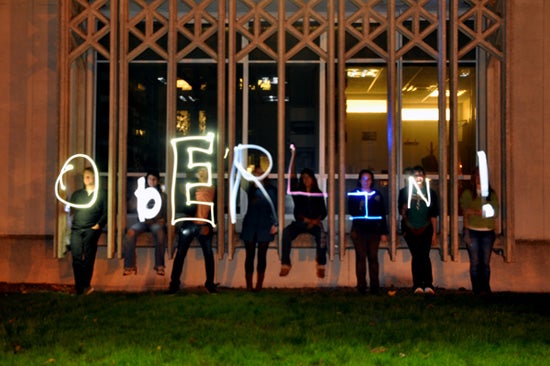 And then we rocked the Oberlin love. ♥!

Yes! I made it into an Oberlin blogpost!

Also, kudos to our awesome teacher and blogger extraordinaire, Ma'ayan, for being so fabulous and letting us "skip" class!

I love you. That is all.

I am reading this very late at night. This makes for great hallucinations. very coooool!

@Silvia - FAMOUS! Our class skipping is the best kind of class skipping: not actually ditching, but having more fun than if you decided to not attend that day.

@Imma - Happy to oblige! Ben and I used to play with light whenever we'd get bored and I'd have poi and a camera around.

This is fantastic! OK if I post a link on my personal blog?

I especially love the picture that spells Oberlin. And the ghost pictures! I've only seen long-exposure done at night. Does it work during the day at all?

You should ask your roommate if such things are possible during the day... Hillary did a really awesome conceptual project on just that them this week!

We should do long exposure projects in the future. My brother and I have toyed around with having someone walk across the frame. Every step, blast them with light. Get a bunch of ghostly freeze-frames.

Will - Nothing is stopping us. Let's do it! SOON!