For the latest information about OSCA, visit the housing office OSCA page or www.osca.coop.

As you can see in numerous posts on the Oberlin Blogs, co-ops are student-run cooperatives where students come together to cook and eat meals together. All co-ops have a dining component, and four of them—Harkness, Tank, Old B, and Keep—house students as well.

In my opinion, co-ops are one of the most special things that are distinctly Oberlin. Though so many students join co-ops at some point during their four years as a student, I also think that it can be one of the most confusing features of Oberlin to understand as a prospie. Before I came here as a student, I know I certainly didn't know much beyond that a co-op is a place where students make meals for each other.

So, here are some FAQs that I hope will help clarify what co-ops are and all the wonderful things they have to offer.

OSCA stands for Oberlin Student Cooperative Association, and is the umbrella organization to which every co-op belongs. When someone asks you whether you eat in OSCA or CDS, they are asking if you are in a co-op or if you have a regular dining plan and eat in the campus dining halls (Dascomb, Stevie, or A-House).

OSCA is notable in that it is one of the largest organizations of its kind in the entire country—and the largest one per capita of any undergraduate school! Some other schools such as Stanford or UC Berkeley have co-ops, but a much smaller percentage of their students actually belong to them. 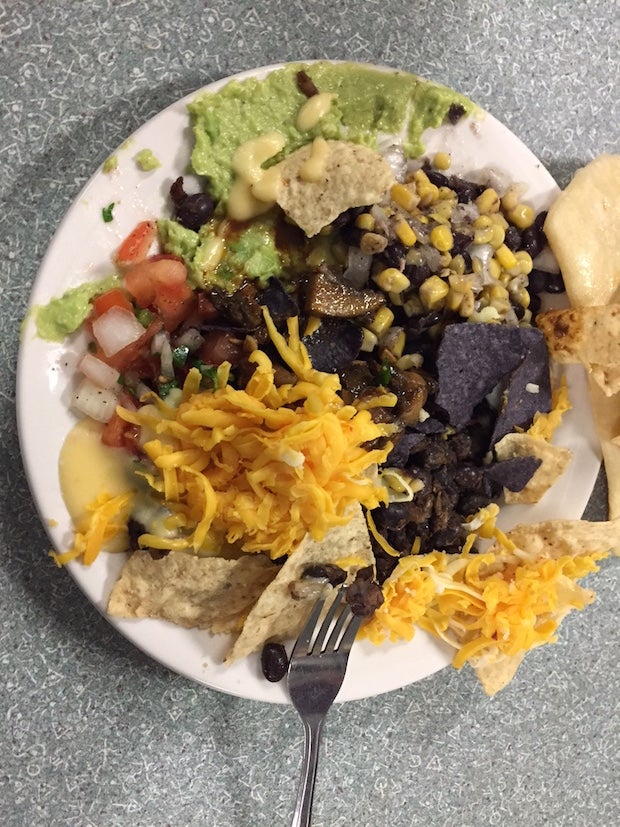 One of my favorite co-op meals ever: nachos! And you don't even have to pay extra for guac.

2. What do you mean when you say co-ops are "student-run"?

Each individual co-op is fueled by the hours students put into their required jobs, and all decisions regarding co-op function are made by students. Students are the sole cooks, discussion leaders, and decision makers for the co-op—there are no paid, professional staff apart from the two or three who work for the entire OSCA organization.

3. How do students contribute hours to the co-op?

I'll start with the basics: in most co-ops ("4 hour" co-ops), every student is required to do four hours of co-op work per week. If you are not elected to one of the many positions in the co-op, you generally would do three hours of cooking on various cooking shifts throughout the week, and an hour-long crew. Unless you really like cleaning and really hate cooking, in which case you could do four crews. But why would you want to do that?

In a general sense, crews are when students who are on the shift clean up after meals. This includes stacking chairs, cleaning any and all surfaces, washing the dishes or pots using industrial-sized kitchen equipment, sweeping and mopping the floors, and taking out the trash and compost. Each of these jobs is highly specific, and every student has a quick training at the beginning of the semester to make sure they all know how to do the jobs properly. My personal choice job is cleaning surfaces. To clean them, you have to do the "three-step process," spraying each surface with yellow de-greaser spray, then water, and then bleach to sanitize them. Each shift has around 7-8 students on it and isn't too bad because people play fun music on the speakers in the kitchen.

4. What are some of the elected jobs that co-opers can do?

There are so many! You can run to be a head cook (either by yourself or with a friend) for a specific meal, such as every Wednesday lunch. These shifts are three hours long, so that takes care of all your cooking hours, and then you just have to do one additional hour of crew (except for a few rare exceptions, all co-op members have to do a crew, regardless of their other jobs). Head cooks are in charge of planning and executing meals.

There are also several positions called "makers" that generally count as two or three hours and involve some sort of cooking. These include bread-makers, granola-makers, and tasty-things-makers. Last semester, I was one of the three tasty things makers for Harkness, meaning that I got to make yummy desserts for Harkies every week. It's a really fun job, and baking for three hours every Tuesday night is a nice way to wind down and take a break from my schoolwork and other activities. 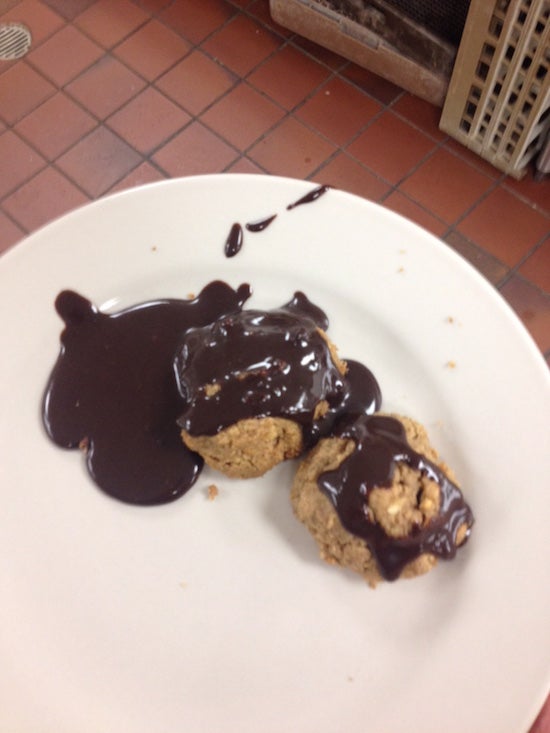 The finished product—peanut butter cookies with homemade chocolate fudge sauce (they taste better than this picture makes them look, I promise).

In addition to being a head cook or a maker, there are others that help the co-op run smoothly, such as DLECs, or "discussion loose-ends coordinators," who basically just lead every co-op discussion. There's also missed-jobs coordinators (a 2-hour job in Harkness), who keep track of who misses their shifts and communicates with them to make sure it isn't part of a larger problem. Other examples are board reps, who represent their co-op in OSCA committee meetings and inform co-op members of what was discussed at them, treasurer, local foods representative, and historian.

So, if cooking isn't your thing, don't fear! There are many other ways you can get your hours done without having to cook.

Yes! While I didn't join a co-op till the second semester of my sophomore year, I had a lot of friends who came into Oberlin either living and dining, or just dining in co-ops, and they loved it. I knew I wanted to live in a first-year dorm, so I chose Dascomb, but if you don't feel the need to live with all other first-years, and if the co-op lifestyle appeals to you, go for it! There are a bunch of first-years in the co-ops, especially Harkness (which is the biggest one).

6. Why do people join co-ops instead of just eating in CDS?

For some, it's due to financial reasons--eating and/or dining is significantly cheaper than eating in CDS and living in a dorm. You can view these differences here. Still, for many others, they are drawn to co-ops for the premium they place on consuming natural and ethically harvested foods, or because they feel that it can accommodate their dietary restrictions well. For example, while CDS has a lot of vegetarian/vegan options (especially compared to dining halls at other schools), being vegan at Harkness takes essentially no effort, since the majority of meals are exclusively vegan, and if they are not, there is always a substantial vegan option.

Another strong benefit of co-ops for many students is the tight-knit community they offer. It's pretty great eating meals with the same group of people every day, and it is an easy way to meet new students, since Oscans tend to be a friendly and welcoming bunch. 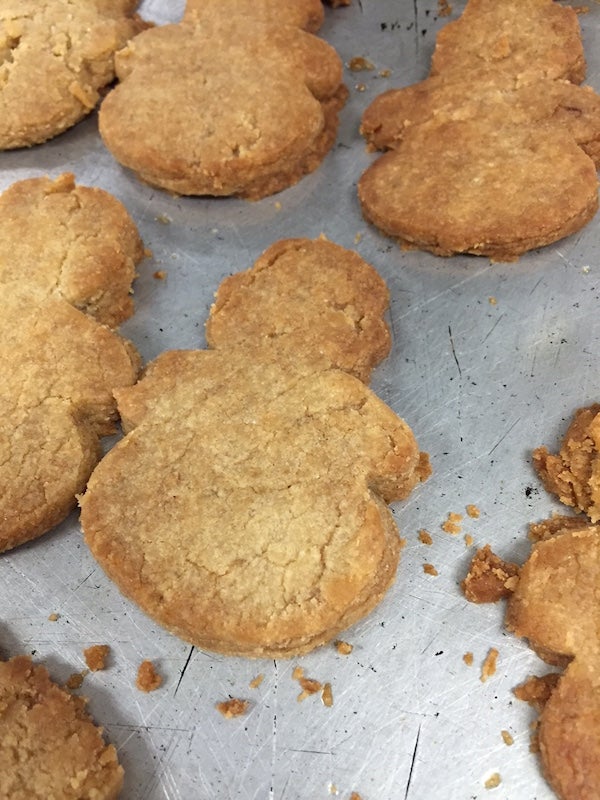 Another tasty things that I made: sugar cookie snowmen.

7. I have some dietary restrictions—can I still eat in a co-op?

Absolutely! All cooks are required to accommodate all dietary restrictions of every member in all food they make. That means that if you cook eggs in a meal, you have to also have a protein option for vegans, and if I bake a cake using flour, I have to bake something else for those that can't eat gluten.

Of course, if you're worried about OSCA's ability to provide for your dietary restrictions, you can read more about it here or contact OSCA directly.

Yes! First of all, though most co-ops cook primarily vegetarian meals, some co-ops—like Old B, Tank, and Pyle—do occasionally cook meat, albeit not so often. I eat in Harkness, which is strictly vegetarian, and though I was apprehensive of abandoning meat in my diet before I joined, it's really not so bad.

For one, it's important to remember that, since many OSCAns have been vegetarian and/or vegan for a while, they know how to cook delicious vegan/vegetarian meals and still have a balanced diet. On the other hand, as a meat-eater, if I decided today to become a vegan, I would probably resort to making salad three times a day. That's an exaggeration, but I cannot stress enough that the people in OSCA are experienced vegetarians/vegans, and therefore know what they're doing!

Also, when you're in OSCA, you get one CDS meal every week that can be used at Stevie or A-House, so you can get your fill of meat there. If that's not enough, you can invest some of the money you're saving from eating in OSCA in a chicken bacon avocado wrap from Decafe every once in a while. Whatever works! 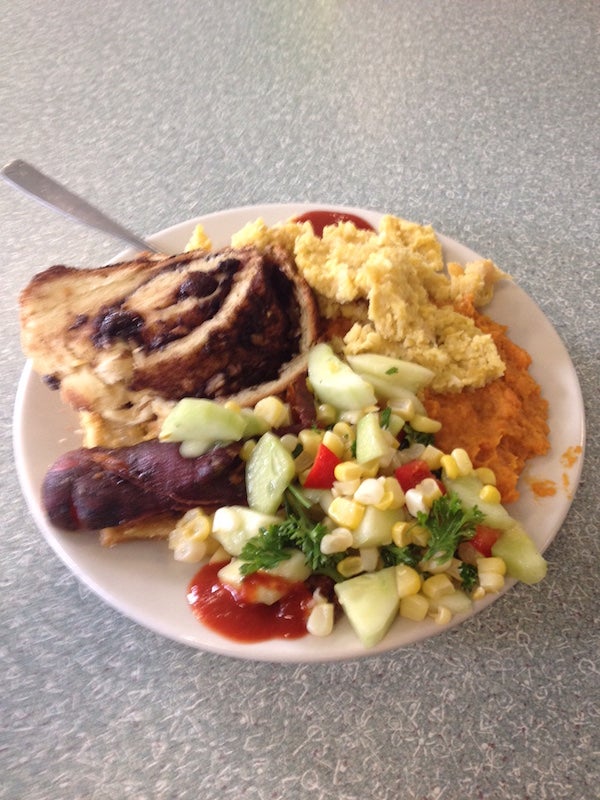 Who needs meat when you have this? Note: this meal had chocolate babka.

If your sports practice or your band's rehearsal happens during a meal, regularly or just one time, you can sign up very easily for a "save plate." Right before the cooks put out the food every meal, they set aside well-stocked plates with the names of the people who couldn't come on each plate. These are reserved in the kitchen, so you can come pick it up anytime and enjoy it! Doesn't matter the reason—if you think you might not be able to come to a meal, sign up for a saved plate! 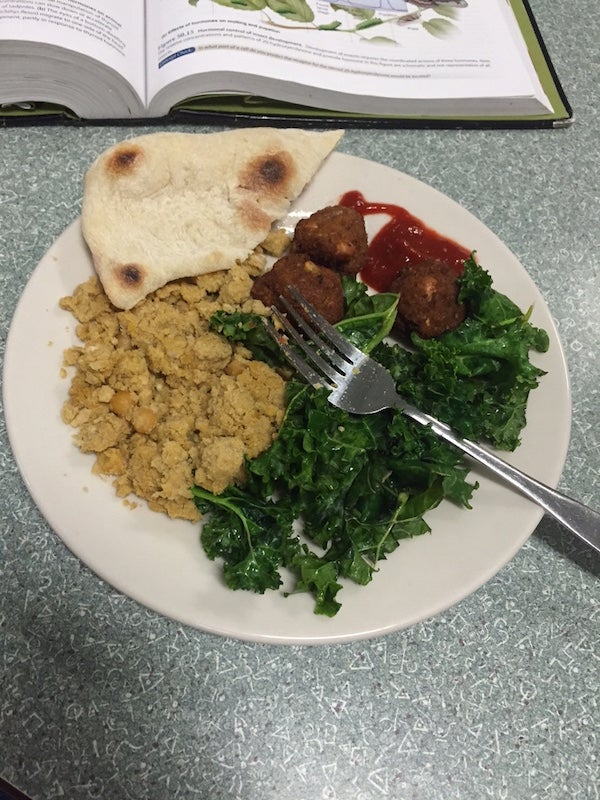 Here's my save plate of falafel that I ate after I had to miss lunch one day because it conflicted with my friend's concert.

Of course! Visitors are always welcome at all co-ops, as there tends to be leftover food at the end of meals. Though you can stop by for a couple meals, it is suggested that you do one crew shift after coming to three or more meals, which is a pretty good deal! So if you're not sure about eating in a co-op your first semester, you can definitely wait till you have a chance to eat at a couple of them and see if you like the co-op vibes. That's how I went about it, and I'm glad I did.

In conclusion: Join a co-op! It's great.