Backstory:
This conversation took place between my friend Adam and I early this semester.

"Let's go on a roadtrip over fall break! We shouldn't make any plans - just get into the car and go!"

"Okay, but we should at least pick a general direction!"

"That might be a good idea. What are you thinking?"

"The South! I've never really been there, and I've always wanted to."

Adam and I had flown to his house in Calvert County, Maryland, over the weekend (because that's where Adam's car was), and decided to relax for a day and a half before we began our journey. Today was the big day, though. All of our stuff was in the car - clothes, books, a cooler of food and drinks, our computers. We were ready! Or so we thought.

Just before we were about to start driving, we looked at each other in horror. What about music? We went back into the house and found three blank CDs, and finally set off (two hours later than planned, of course). Adam played the one CD we found in the car, and I pulled my computer out and tried to make decent playlists (accounting for both our music tastes) and burn them onto CDs as quickly as I could.

We hadn't even crossed two counties before we came across our first interesting sight that we needed to go back and take a picture of. A sign that said "Private Property" with a life size doll hanging by its neck next to it. This picture was taken while driving by really slowly, because neither one of us wanted to end up like the doll. 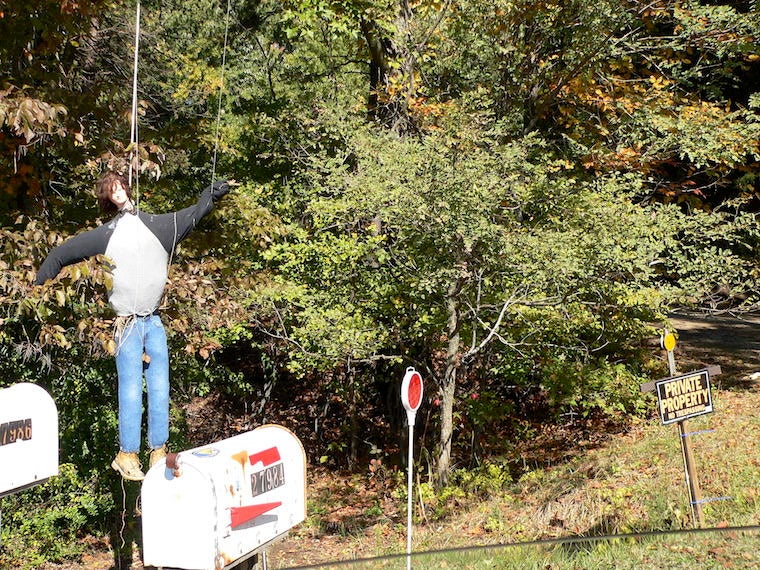 All pictures in this post are from Adam's camera, since for some reason, I decided I didn't have to pack my camera. I don't know why I thought that - I'm just going to blame midterm stress.

We decided to concentrate on covering a lot of ground that day, so we didn't stop very much. We were trying to get as far as Danville, VA, before dinner (an arbitrary decision made by looking at the general direction we were going, which was to Atlanta, where Adam's cousin lived). We pretty much just stayed on the highway for a while, except for the time that we stopped at a McDonald's to use the bathroom, and I had a craving for chicken nuggets and Sprite. I hadn't eaten at McDonald's for years, and I was quite looking forward to it. I certainly learnt my lesson there - the nuggets tasted artificial and the Sprite was completely flat.

At around 5.40 p.m., our GPS announced that we had arrived in Danville, but we saw no signs of a city, or even a town. Maybe this is what towns in the South looked like? The South was kind of rural, right? What about dinner, though? Both Adam and I were pretty hungry, and this was where we'd scheduled ourselves to stop for dinner. We drove on for a couple of miles, but still no signs of a town. I finally just pulled the GPS down from the dashboard and figured out that we could find places to eat on there. We thought "Mary's Diner" looked interesting, so that's where we went.

It turned out that there was a town, and quite a big one at that. The GPS had probably just told us where the city limits started, and the highway was probably going around the city anyway. Mary's Diner was a great choice - it was a cafeteria type place, where you could get one meat entree, three vegetable sides, bread, drinks, and possibly dessert for about seven dollars. As I would later find out, this was a pretty common thing in the South, but I was really amazed - the food was wonderful, there was a lot of it, and the price was really good. The sweet tea was great, too.

Amusingly enough, Adam decided to abandon his vegetarianism for a true Southern experience, and had a whole dish of chicken livers for his entree. The whole experience was a little bit surreal - we were both so confused at the cafeteria style and didn't know how much we could get, and most other people seemed to belong to places around there. We were having trouble understanding their accents, even. And then, when we finally got to a table, our conversation was mostly about Firefly and other science fiction. In a Southern diner! I'm not sure if I can describe why that felt so surreal, but it did.

We drove on to Charlotte, NC, stopping only for gas (where Adam decided that it was imperative that he burn a CD, too - my music was probably wearing thin). The Comfort Inn that our GPS directed us to turned out to be a Comfort Inn & Suites that cost over $110 for a night. Apparently looking for a place to stay right outside a city is not such a good idea. Our GPS then directed us to Lake Placid Motel. We followed the directions to that and ended up in the middle of a residential neighbourhood with Halloween decorations everywhere. At this point, it was 9.30 pm and we were tired, but fortunately, the third time's the charm, and we managed to find a relatively cheap Days Inn (with free internet, even).

That was two days ago. Now I'm in Atlanta and I know how to fire a pistol. More about that in Part Two.

This is so cool! I love road trip stories! Have awesome adventures!

I have such a love for the south and all the ridiculous stuff and the oh-so-bad-for-you-but-oh-so-delicious food... This is an exciting way to roadtrip! I want to hear the pistol story!

Thanks Aries and Ma'ayan!